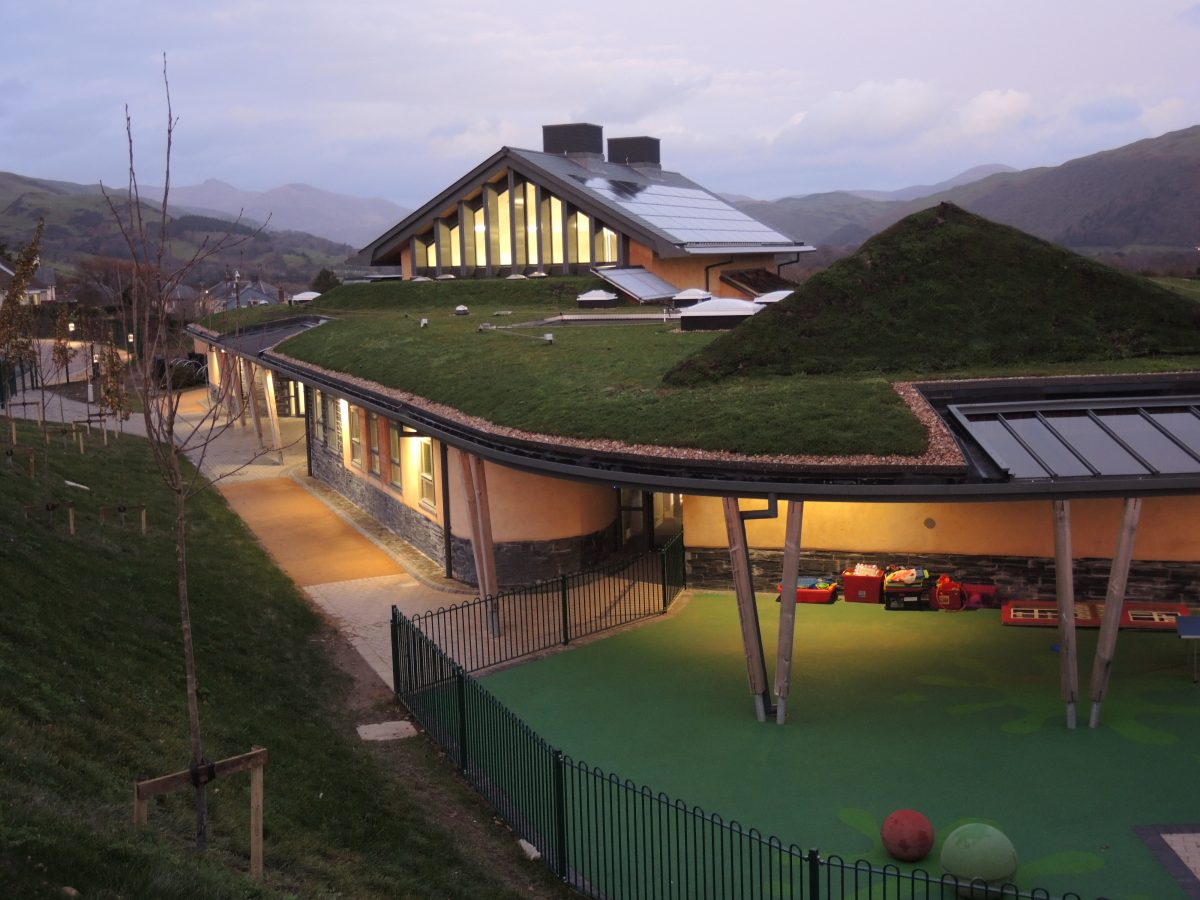 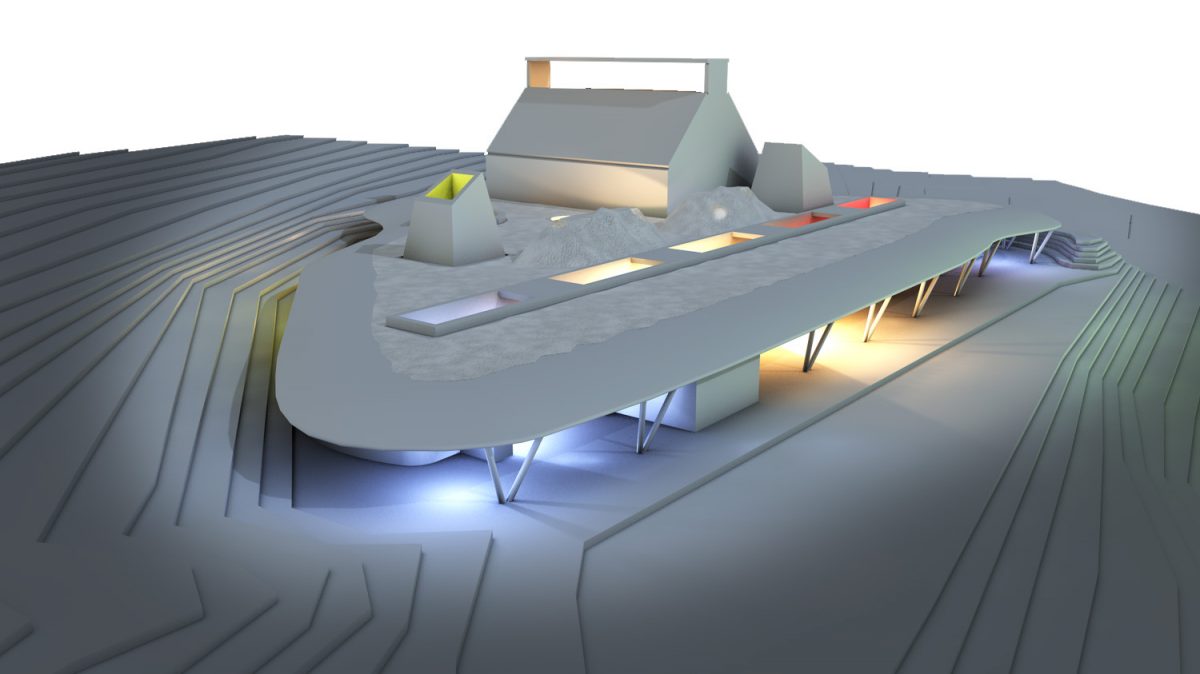 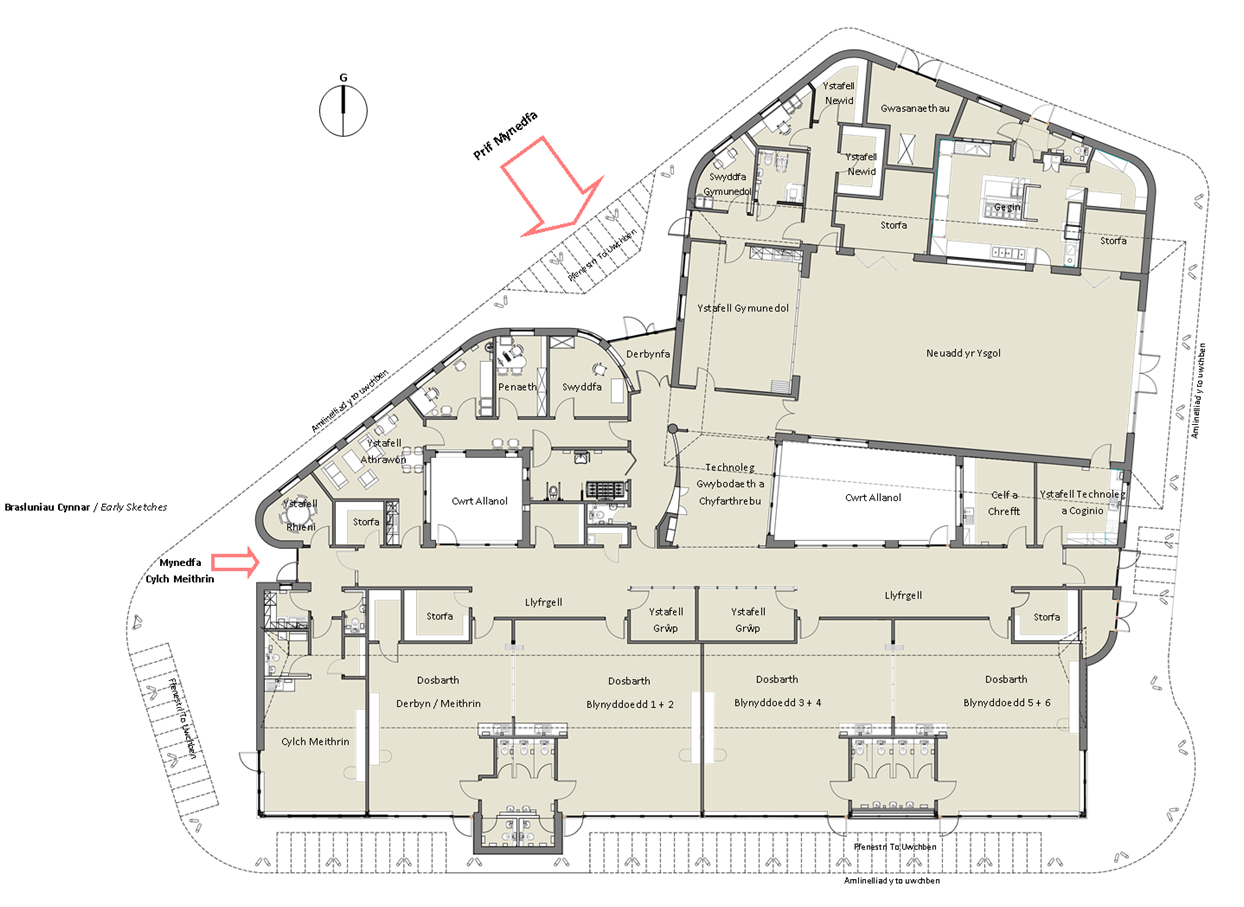 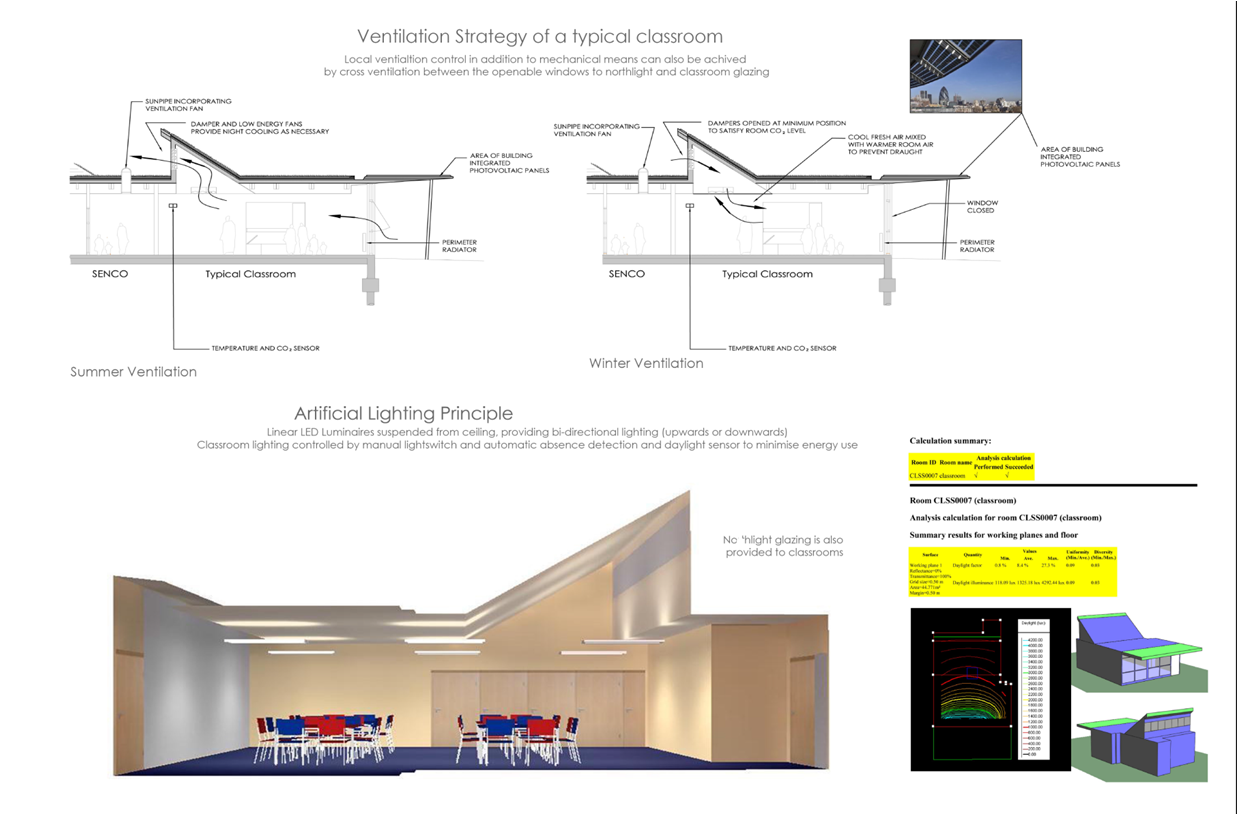 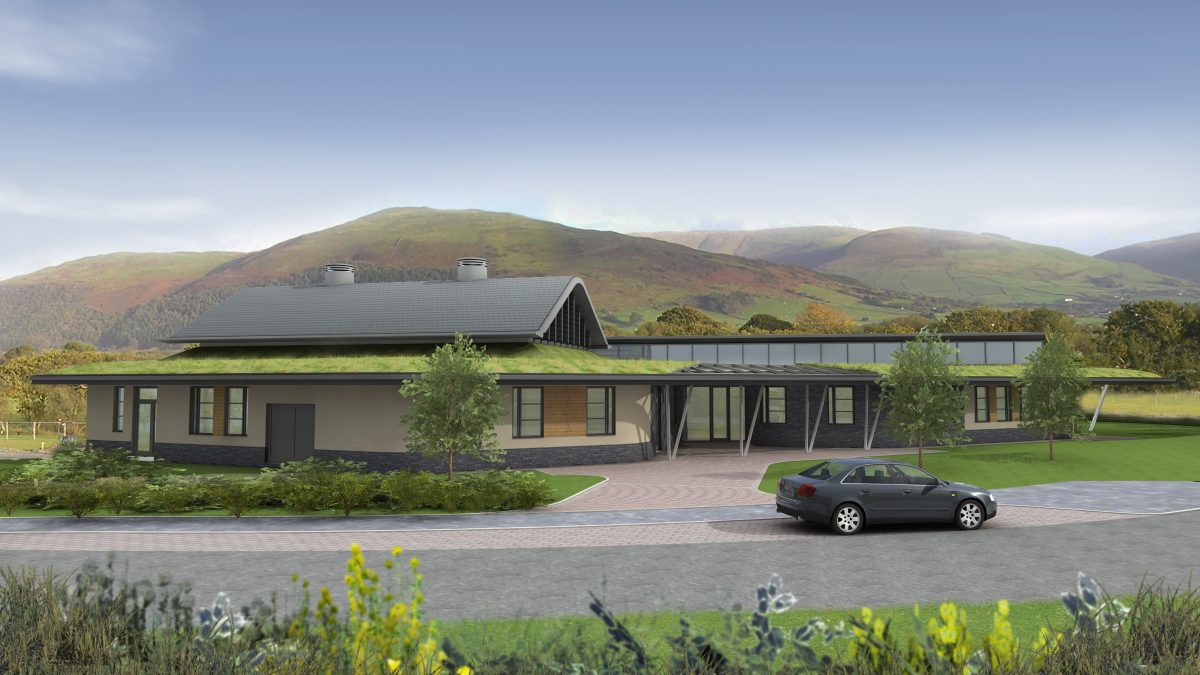 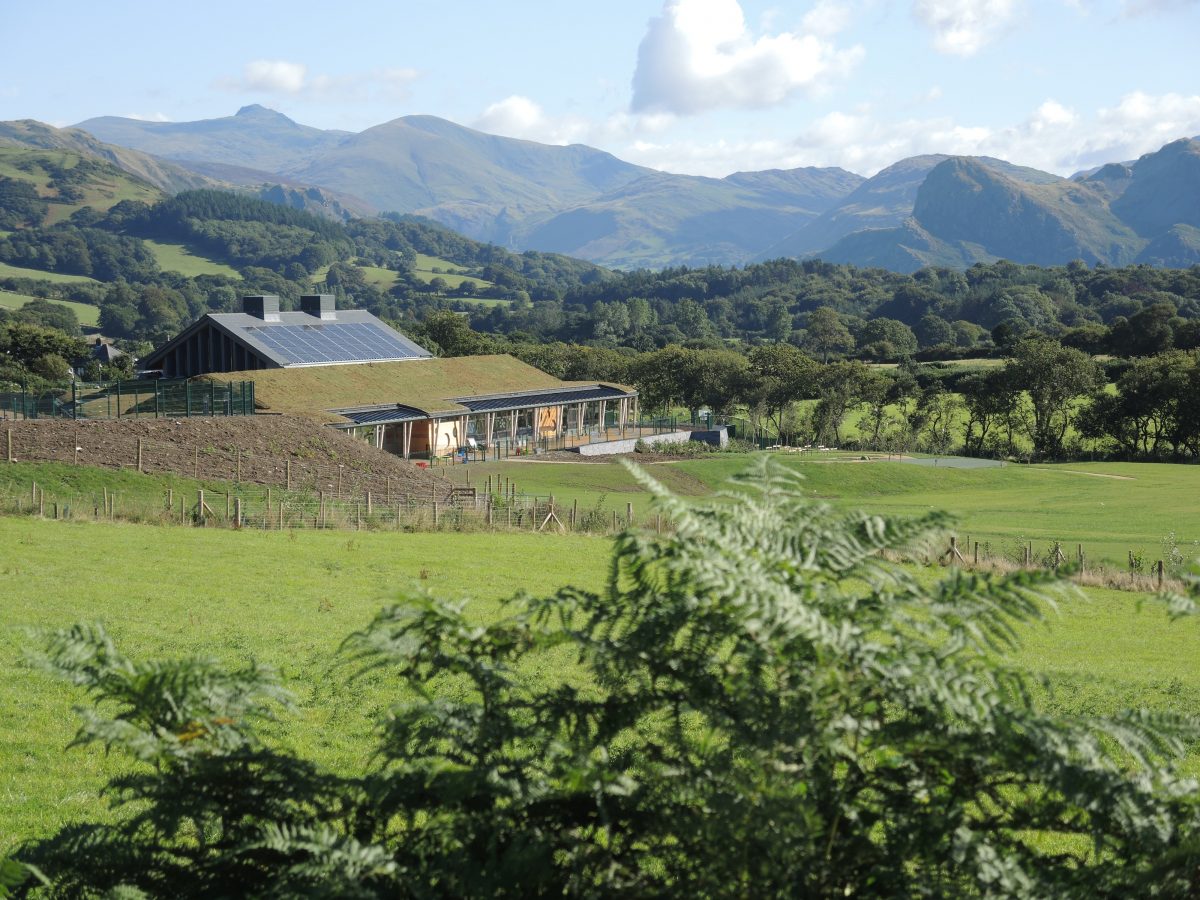 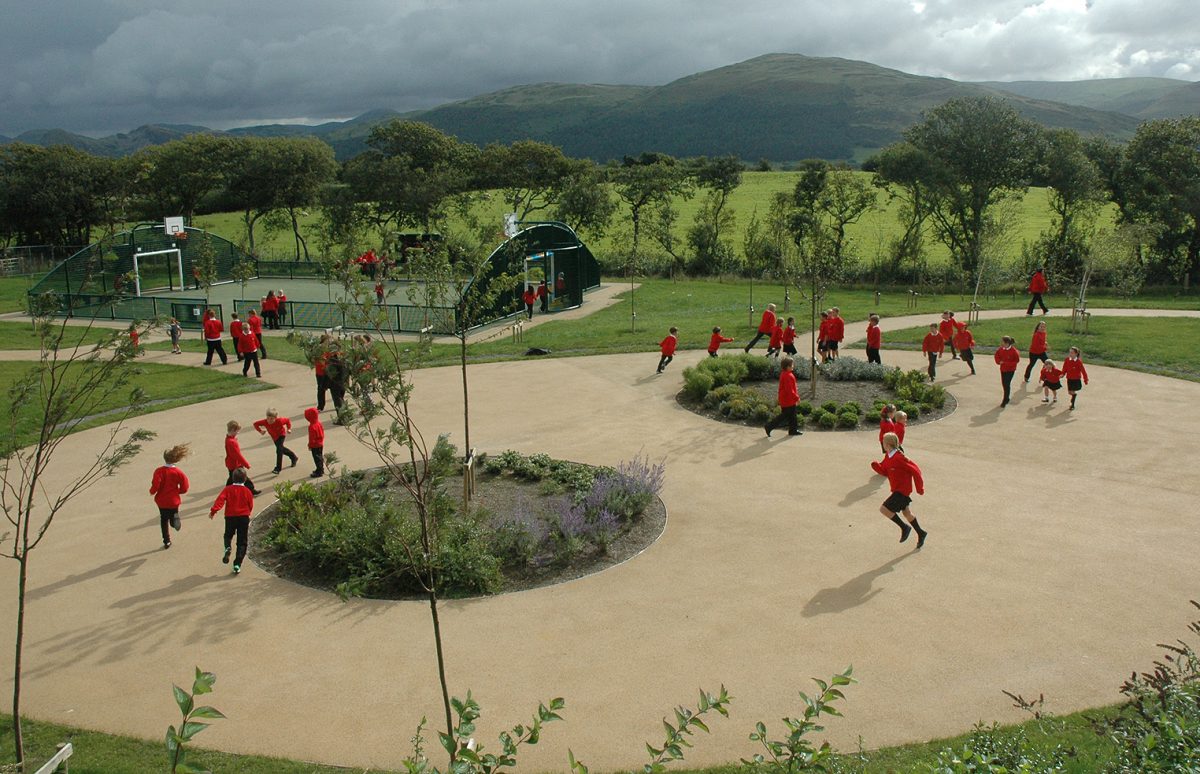 Whilst the school ‘modernisation’ process is an emotive process to many in small rural communities, the development of Ysgol Craig y Deryn secured the long-term employment to staff and a supply-chain of local support businesses. The new area school represents a commitment by Gwynedd Council to reducing overheads, financial risk by reducing energy consumption but also its carbon footprint into the future. Although it is not the main driver for the reorganisation process, this project results in revenue savings which help to ensure the future sustainability of the education provision within the catchment. Ysgol Craig y Deryn replaces four buildings ranging in age from late Victorian to the nineteen seventies and in turn delivering a projected saving of 14% of the revenue budget and the removal of existing maintenance costs and obligations.

During the construction phase of the project, the local economy benefited from employment opportunities and spend at businesses of many types, whether as sub-contractor companies, materials suppliers or business supporting personnel who were staying in the area

This proved to be one of the biggest challenges in taking forward the development of Ysgol Craig y Deryn, as the key political decision to close the four existing primary schools within the catchment was resisted. At times it proved difficult to differentiate between these early decisions and the dialogue associated with the actual Planning Application submission. A structured programme of consultation meetings, workshops and exhibitions was initiated by the Client and Project Architect following a series of public meetings held at the stage when the concept of school re-organisation was being considered. The later meetings were held specifically with head teachers, staff and representatives of the four communities to establish design principles, an appreciation of the site context, and agreement over the design objectives of the brief. These sessions enabled working relationships to develop, a formal feedback mechanism to be established and a forum created where information could be gathered or alternatively the concerns and issues of the communities better understood. It should be noted that all the sessions were conducted bi-lingually. Many actually occurred through the medium of Welsh alone (where it was appropriate to do so).

Whilst not directly related to the planning process but having a lasting influence on the project outcomes, a range of other community involvement initiatives were coordinated by Gwynedd Council to focus on the future welfare of the pupils by the act of creating a new school community. A strategy for this transition and gradual amalgamation of the existing four schools took place through a range of themed events and site visits where pupils explored the opportunities that the imminent change would bring.

The events included the following:

Promoting sustainable development opportunities within its widely dispersed communities is vital to the future well being of Snowdonia and the county of Gwynedd. Whilst the population has remained relatively stable over the past few decades, it masks a much more significant structural change - highlighted by the outward migration of young people for higher education, housing and employment opportunities and an inward migration of older people which has paradoxically widened the gap between house prices and affordability for what is a relatively low wage economy, largely dependent on public services, tourism and agriculture. These changes to the age and social structure of the population are not uncommon to other regions of the UK, but when coupled with the statutory purpose and function of a National Park, considerable care and imagination is required to demonstrate the positive impact and benefits that good planning can have to influence and guide the future viability, vibrancy and well-being of a sustainable, balanced and empowered community. It should be noted that the Welsh language is integral to the identity of this area. It is the spoken and written language of approximately 62% of the population in Snowdonia and in some communities the percentage is as high as 85%.

Active and passive measures to mitigate any environmental impact together with a clear strategy to minimise energy consumption and waste have been considered at each step of this project. BREEAM ‘Excellent’ together with EPC and DEC ‘A’ ratings have been targeted but in reality the choices to build a well-insulated, correctly orientated, well-lit and naturally ventilated is a good example of the ‘fabric first’ approach to provide a stable internal environment that is less susceptible to the extremes of seasonal variation and will also withstand climate change in the future.

Solar Hot Water will supplement the water heating demands of the school while 100m² of PV cells that are integrated into the south facing pitch of the Main Hall Roof and will produce 12.5KWh with a 5.22 tonne annual CO2 saving. These will be linked to the ‘Feed-in Tariff’ while the biomass, wood pellet heating may seek to take advantage of the ‘Renewable Heat Incentive Scheme’. Future-proofing the wood pellet vs wood chip has been integrated into the scheme and the combination of these technologies will provide a low carbon solution to the space heating and electrical requirements of the building that in turn will generate approximately 60% of the total required energy demand on site from sustainable sources.

Rainwater harvesting has been incorporated for the flushing of WC’s and to reduce water demand, while a sustainable urban drainage system (SUDS) strategy has been developed with swales and an attenuation pond to manage surface and ground water issues. On site foul drainage treatment is provided by means of a package treatment plant so as not to compromise the capacity of the existing mains infrastructure within the village. It is hoped that this project will operate as an ‘exemplar scheme’ within the National park.

During construction 94% of the waste produced on site was diverted from landfill and all specified products were responsibly sourced or were selected through the BRE ‘Green Guide’ with many registering an ‘A’ or ‘A+’ rating.

The enhancement of habitats and bio-diversity of species has been encouraged, with considerable thought given to the design of boundary treatments and translocation of hedges. Wildlife areas are accessible to pupils as a resource and work is ongoing with the Education officer from the National Park. Flexibility and ‘loose fit’ has been introduced into the configuration of the school building while recycling initiatives for water and waste of all types can be seen and assessed as a learning resource by the pupils. A dipping pond and wildflower meadow has also been included within the scheme and planted predominantly with native species or those under threat such as the Black Poplar.