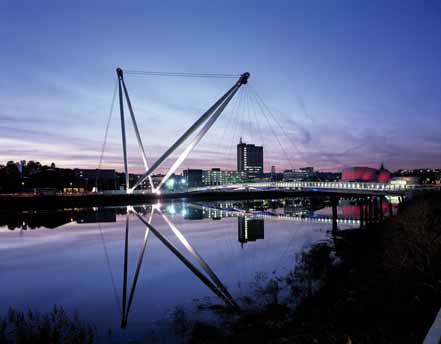 The bridge's dramatic crane structure provides a symbolic link to the site's earlier use as a trading wharf. It is also a prominent feature of the city skyline, drawing attention to the river that is hidden from much of the city centre.

Placing the main supports on the west bank also reflects the pronounced change in the urban scale and grain from the commercial heart of the city on the man-made west bank, to the domestic uses and soft landscape on the east side. The deliberate concentration of major structures on the west bank has many practical advantages. The vast majority of temporary and permanent works were kept away from the nearby dwellings on the east bank. Construction work was simplified, with no requirement for any works on the tidal riverbed and avoiding impact on the local river ecology. The existing car park on the west bank also provided an ideal construction site for final assembly of the structural components before installation.

The primary supporting structure is of four masts, standing in pairs, which support the 145-metre long bridge deck from the west bank. The bridge deck loads are transferred to ground level by two 120mm diameter cables which also act as stays for the masts. The deck is five metres wide and 4.1 metres above water at mean high tide level.

Atkins and Alfred McAlpine created a lifting and construction sequence which ensured the spectacular masts could be jacked safely into place.  The masts were installed in pre-connected pairs, followed by the bridge deck in five elements corresponding to the cable stay support pattern. Final connections to each riverbank were achieved with two pre-cast concrete abutment units.

In addition to the structural steel, the bridge includes nearly three kilometres of stainless steel wire.  With a load bearing capacity to carry 2,000 people, the structure includes 20 tonnes of dampers to prevent vertical and lateral oscillation. The masts are constructed from rolled and welded sheet steel and ‘fixed’ in mountings with 450mm long stainless steel pins weighing 500kg each. The bridge has a design life of 120 years.

The River Usk is a Site of Special Scientific Interest and a Special Area of Conservation. Listed for its flora and fauna, the Usk contains protected fish species, and otters and is edged with sensitive salt marsh maritime flora. Therefore the bridge had to avoid damage to the local river ecology.

A key early design decision was to avoid the installation of any temporary works in the river. This not only combated safety risks but also avoided damage to the wildlife habitat. It was also important to minimise expenditure on temporary works to maximise the budget available for permanent works. This strategic decision immediately ruled out an arch and led to an exploration of masted and cable-stayed structures.

Architect: Grimshaw. For further information on the design and delivery team, please contact the Architects.