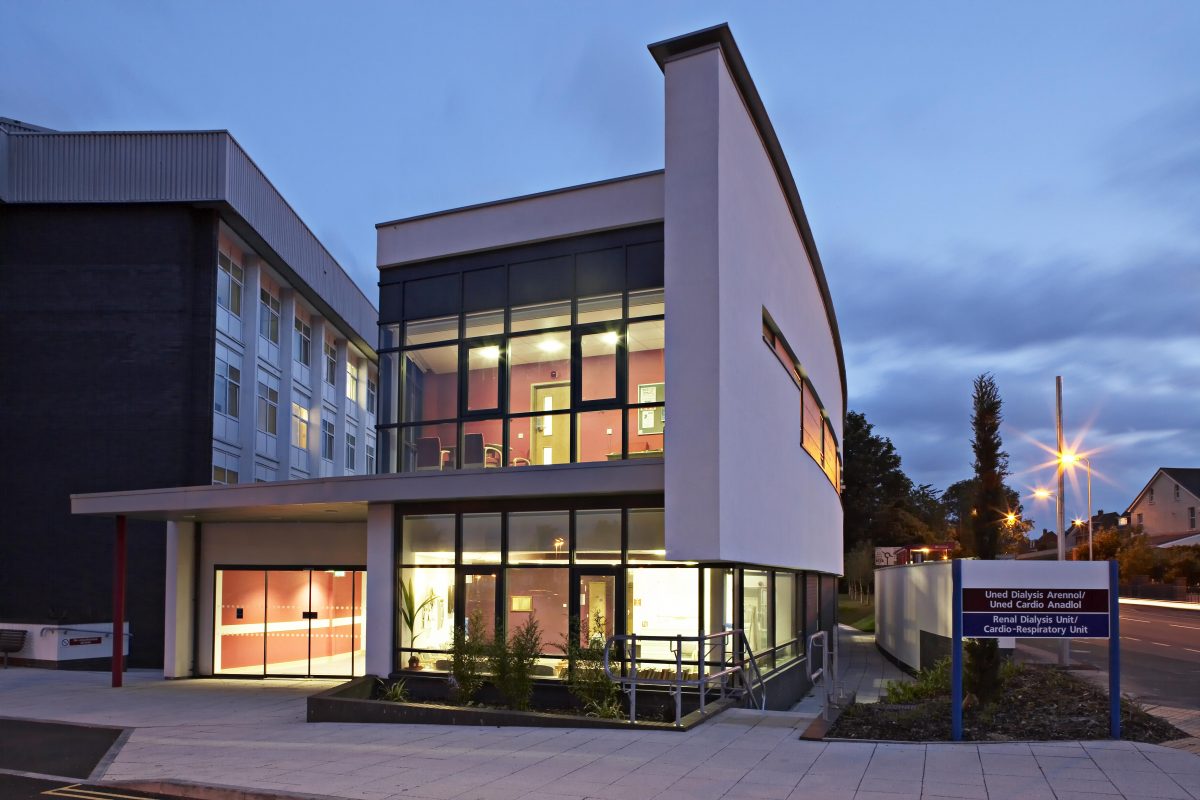 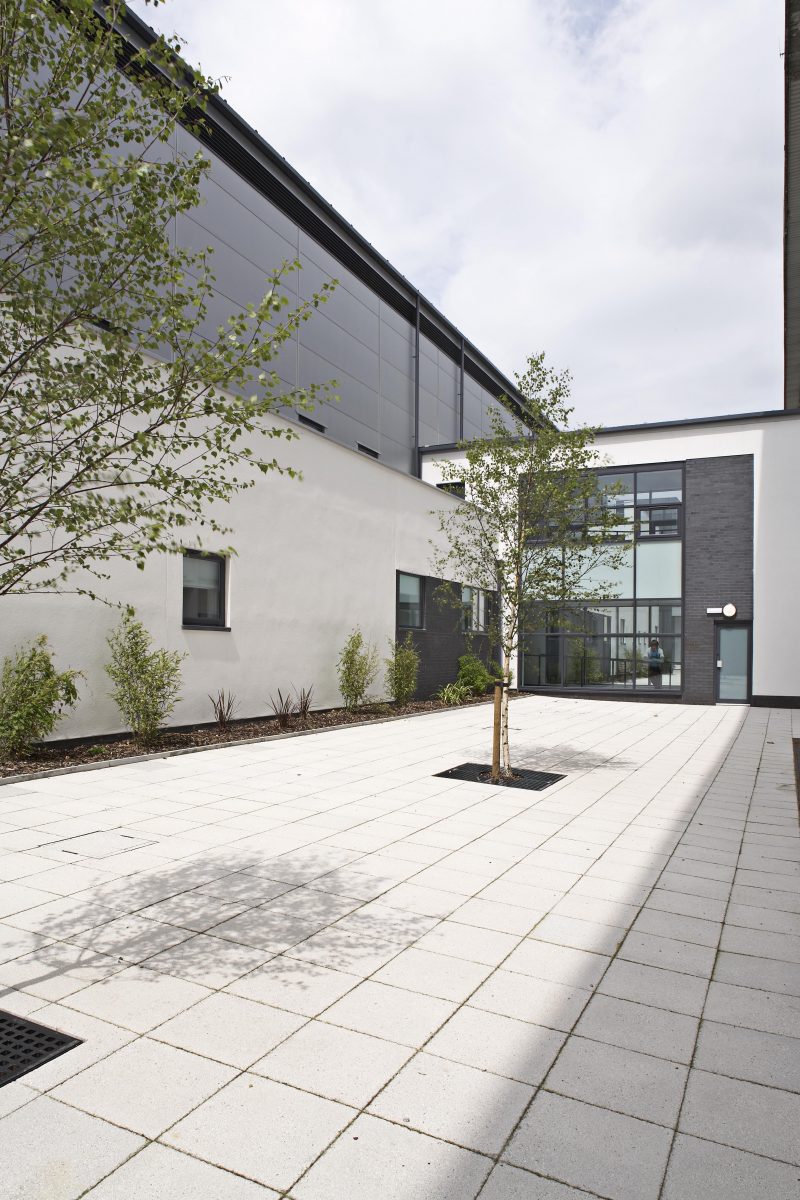 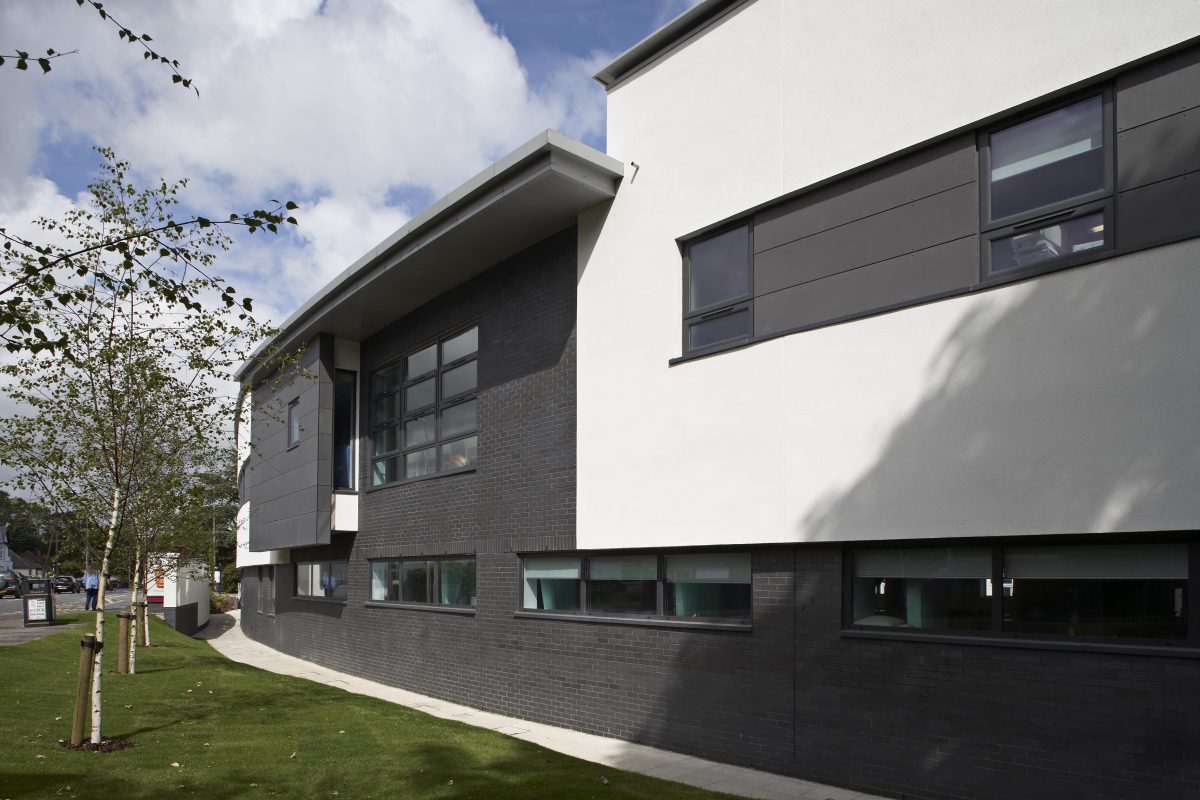 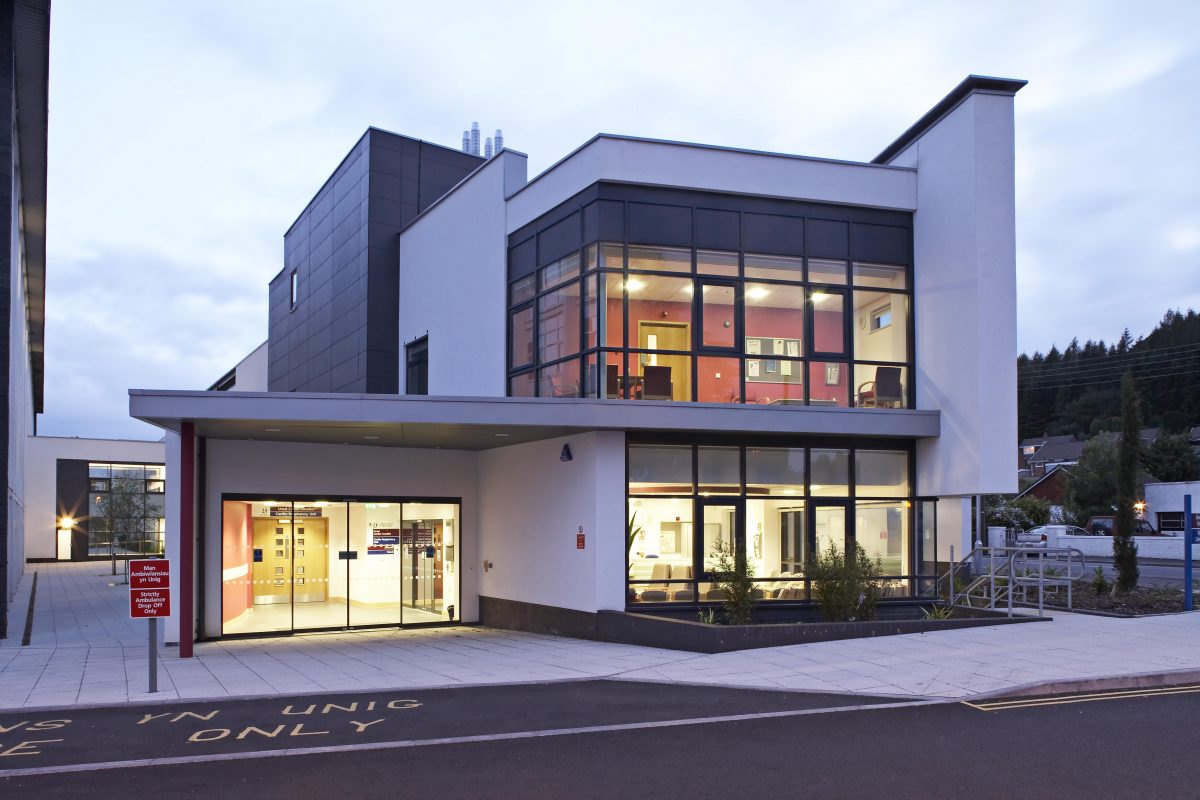 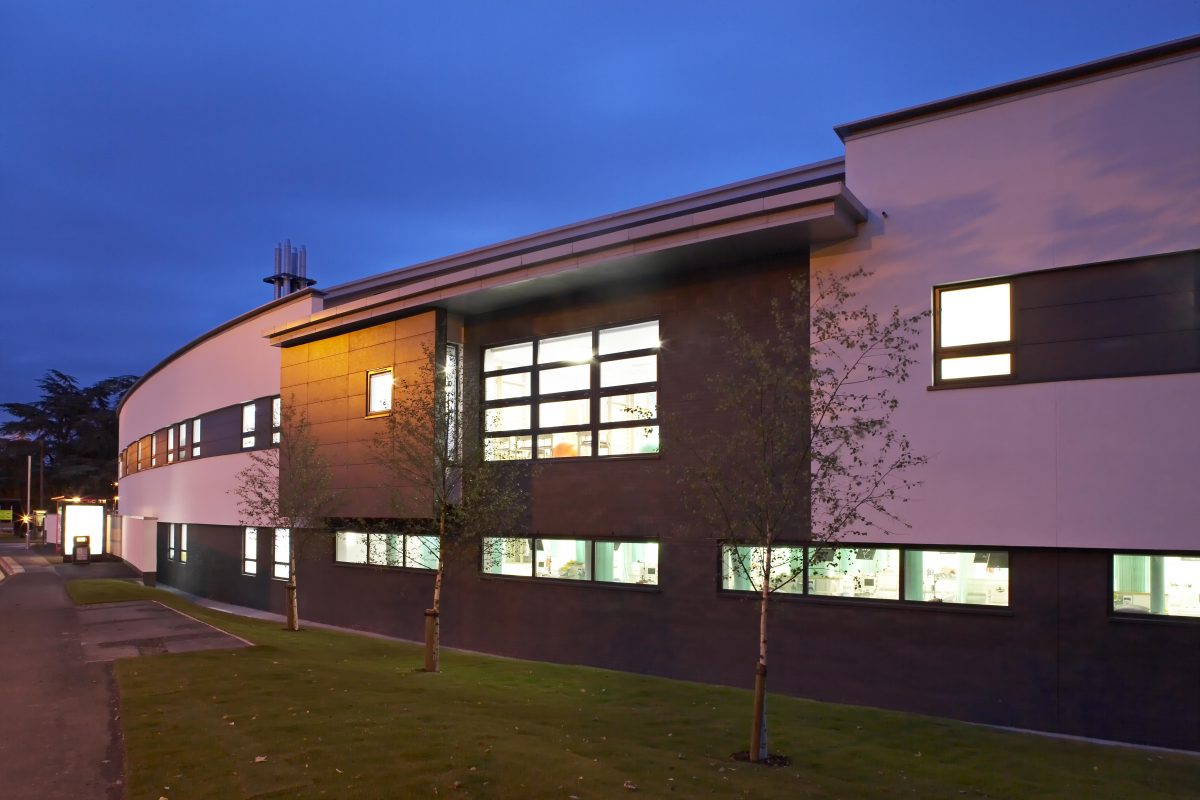 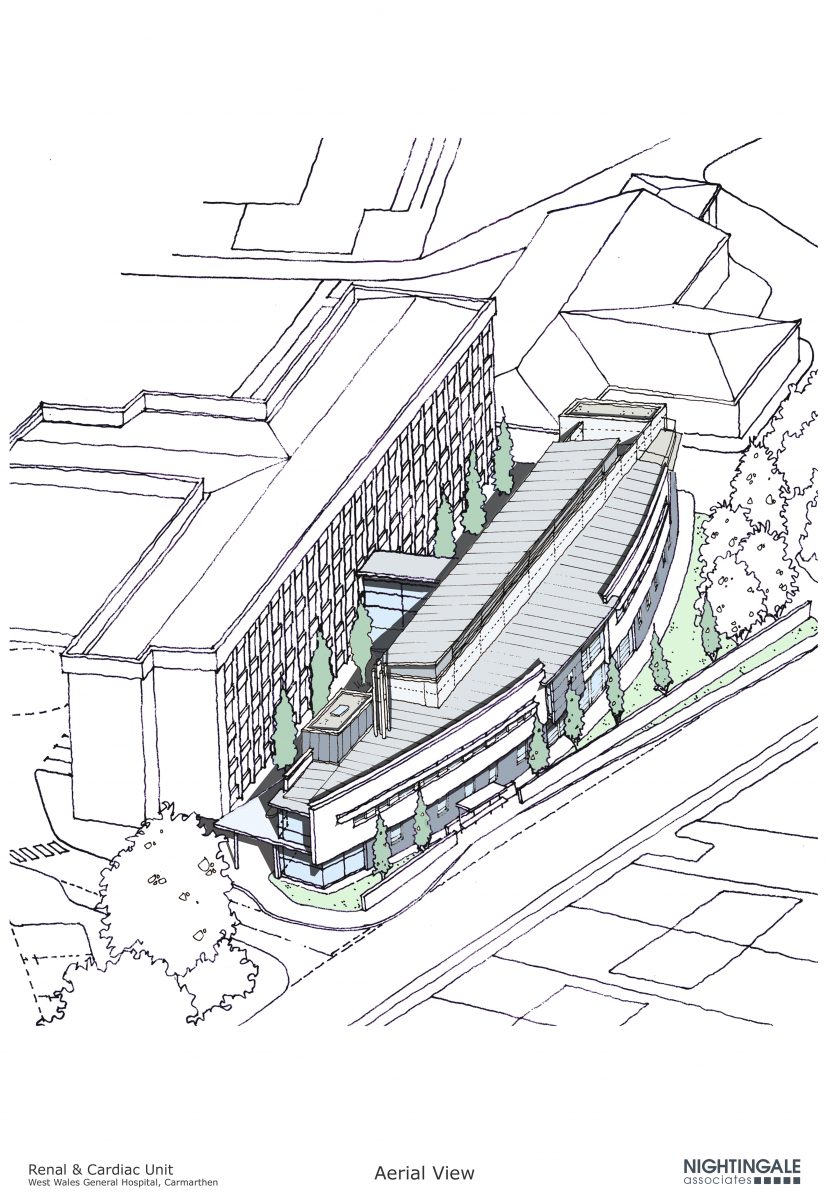 The brief for the new unit developed after collaboration between the architect and hospital staff, including clinicians, also patient groups and estate managers.

The chosen site was close to an existing, predominately glazed ward building which affected the fire strategy of the proposed building. Surrounding the site is residential development, a main road to the west, and a ward block to the east, with a variation from 2 storeys to 4 storeys. Constructed on a gently sloping site, the unit is cut into the slope; by reducing the ground level the building sits lower on the site and enables a physical link to be made to the existing ward building. In addition a stepped section was developed, which acknowledges the contrasting scales of the existing ward block and the residential properties opposite.

The building was constructed using a main steel frame, with a Structural Section Framing (SSF) system, which enabled a relatively quick build with a limited palate of materials. The strong white curved insulated rendered band which runs along the west elevation acknowledges and responds to the white rendered properties opposite along Dolgwili Road. The use of blue engineering brick reflects both the existing ward block building but also enhances the visual strength of the white band.

The long sweeping curve also reflects the nature of the site, creating openness to the street, allowing a visual link to the crop of trees to the south west of the site and allowing a row of trees to be planted parallel to Dolgwili Road.

The curve also creates a visual focus to the main entrance of the unit giving the unit a strong identity and making it clear to patients and visitors of where to go, which is crucial to health care buildings. The existing site infrastructure was re-configured to ensure legibility. The main entrance and drop-off area is designed with a pedestrian focus, creating a level approach from car/ambulance to paved area. A series of permanent planters have been incorporated into the design to act as a calming element prior to entering the hospital facility and can be seen once inside.

The new facility was developed with future demand in mind, to build a suitable ‘long-term’ building which reduces the need to build additional buildings in the future at increase cost, both financially and environmentally. Studies were carried out to establish the capacity required to cope with future demand for services. The building therefore currently has over capacity. This is seen as a pragmatic approach which avoids the need for additional building in the future, which by its nature would be more environmentally damaging.

Fresenius (the Renal Dialysis Company running the dialysis unit) have stated that the facility at Carmarthen sets a benchmark for new renal dialysis in the UK and it is used as a showcase for dialysis treatment in the UK.