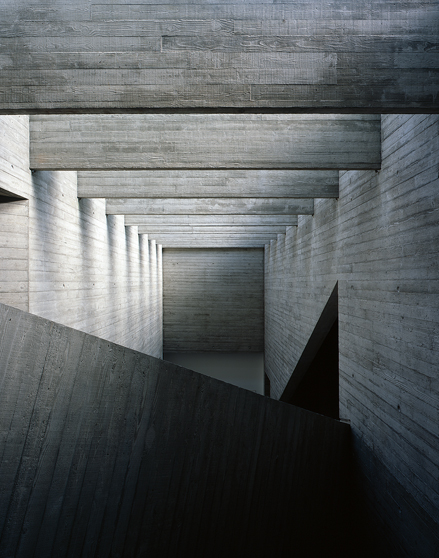 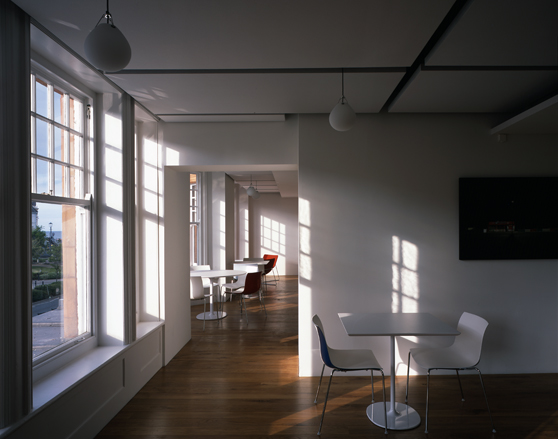 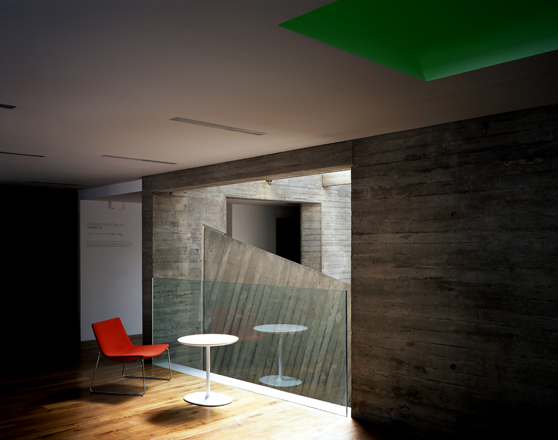 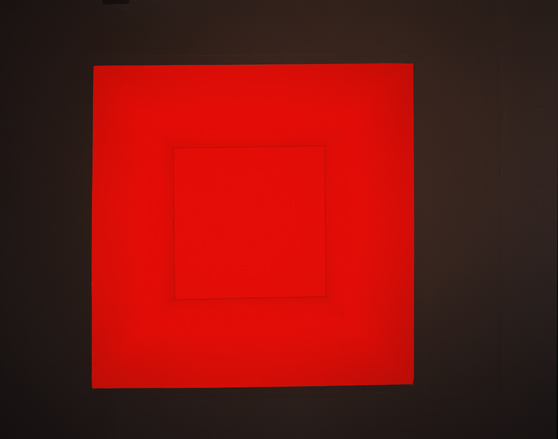 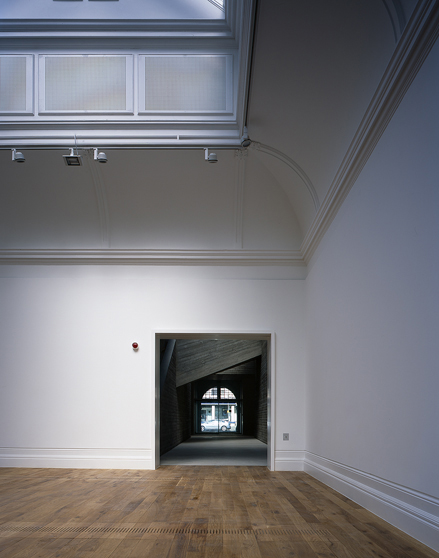 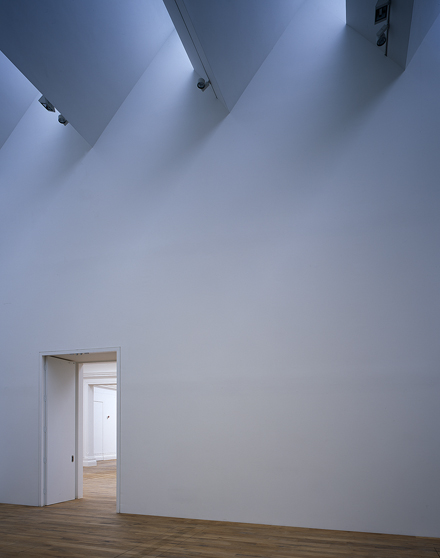 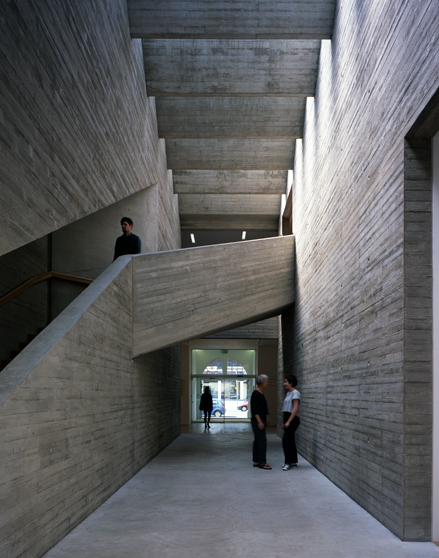 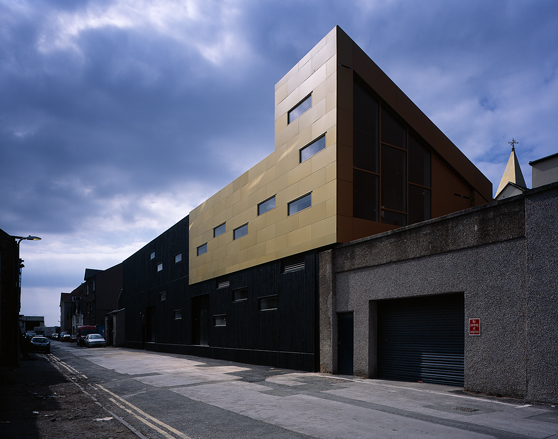 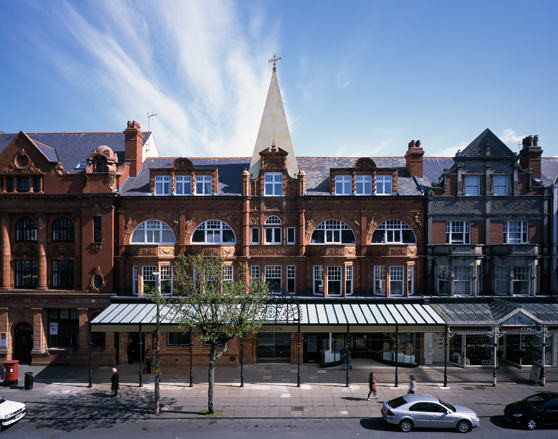 The final spatial brief and design for Oriel Mostyn emerged through a close dialogue between the building users and the designers. The design team worked intensively with the organisation in developing the project around a number of guiding principles, which were then sequentially tested and evolved through workshops with various consultation groups. The guiding principles were as follows; enhance and expand exhibition spaces, maintain and enhance the spirit of the gallery, improvement of support and education facilities and increase presence within site context of Llandudno.

The introduction of a dramatic in-situ concrete space linking the internal organisation of the gallery was intended to create an unexpected experience on entering through the Victorian threshold. The concrete stair geometry within the tube was largely generated by constraints in the plan due to over twenty party-wall situations with adjoining neighbours.

Three new gallery spaces were carved out of the existing building alongside a new cubic infill gallery added to the two existing lantern galleries. The new space would allow taller objects to be displayed in natural light with a more intimate space located off its entry point. A dedicated education space was located adjacent to the existing galleries to encourage a direct interaction with the exhibition programme. A café with a connected gallery space, extended shop and new art workshop and administration spaces were also part of the requirements. These later spaces occupy a new structure which forms the rear concrete and aluminium facade to the restored Victorian galleries.

Mostyn’s geographical and cultural location informed all thinking on the project, along with an appreciation of existing listed Victorian building. The existing gallery was originally difficult to read behind the dark red terracotta facade and the crudely joined canopy (which was actually an early addition along Vaughan Street). The team worked through an involved and at times constrained process with Conservation and Planning groups, creating an improved canopy with eye catching gold anodised features as modern counterpoints to the terracotta. The pyramidal spire was clad in the same material in order to create a visual focal point above the entry.

Due to the complexity of the rear buildings, a minor works contract was used followed by a standard traditional contract. This allowed detailed survey work to be carried out following demolition at the enabling stage which could then inform the main design. During the construction stage for Mostyn, a temporary prefabricated gallery space was also designed to keep exhibitions running during the construction programme.

The key aspect of the project’s sustainability objectives was to deliver a vital socio-economic asset to the community in which Mostyn. The Gallery’s increased appeal and stature is significant for the regeneration of the town.

The nature of the site and budgetary demands of these challenging interventions put strain on the sustainability aspirations and options for Low and Zero Carbon (LZC) technologies. The budgetary demands were viewed as an opportunity and emphasised the need for close life cycle cost analysis of sustainable design decisions. The hierarchy of design options for delivering sustainability was always considered. This hierarchy of principles prioritised the selection of low impact materials and the implementation of energy and resource conservation measures, along with good management techniques. These were prioritised before any technological solutions were considered. To this end the treatment of the existing building fabric was to offer long life, low maintenance and energy efficiency. Double glazing and internal wall insulation were incorporated and balanced with conservation demands.

As the new Mostyn took shape we felt it was turning into something special. When we finally took possession we felt immediately that it was going to be a delight to work in and a delight to be in.  And so it has proved - in functional terms we cannot fault it; it works well for every individual, every department and every activity. We anticipated that it would be reasonably well received by our visitors. In fact the response has been stunning and it is hugely rewarding to be in the galleries and circulation spaces, to observe people responding to the materials and the spaces, the light and the design details. It is a wonderful building and being in it gives an enormous sense of well-being.