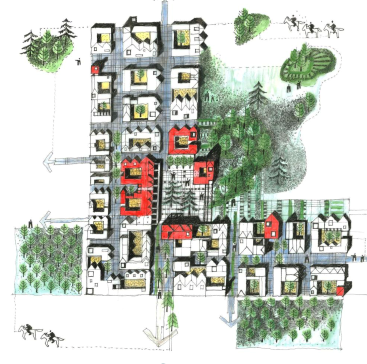 (Above illustration by Proctor Matthews from their publication 'Identity and place - where do houses live'?)

Wayne Forster, Professor of Architecture and Deputy Head of School at the WSA.

Back in 1974 Gordon Cullen and David Gosling published their design for Maryculter, a new settlement located to the south west of Aberdeen within a natural amphitheatre of open rolling landscape, grazing land and gorse cover protected by pine forests and shelter belts. The design creates an unfolding townscape of residential and mixed-use villages – the Wynds, the Kaleyards, Burnside and Blaikiewell. The design for Kaleyards drew inspiration from the historic walled enclosures of the Shetland Islands which provide shelter and protection to crops grown under extreme conditions. In response clusters of new homes were proposed forming sheltered neighbourhood spaces at their heart, with houses orientated to shoulder the prevailing wind – a unique configuration designed to ‘produce a sense of identity and belonging’.[1]

In the design report Cullen observed: “People live in houses, but where do houses live? If they are homeless, then all we are left with is the typical endless, featureless suburbia“.

Could a return to the core principles of Townscape reinforce ways of placemaking and produce tangible results?

Reference to the work of the English architects and urban designers Proctor Matthews suggests the answer is a resounding yes. Both Stephen Proctor and Andrew Matthews can claim a direct lineage to Cullen through their tutor at Sheffield, David Gosling who worked with Cullen and wrote the only monograph. . In a recent presentation of their work to the Welsh School of Architecture given by Stephen Proctor the Cullen idea of ‘the place of houses’ is consistently framed within Cullen’s ideas and underlines the influence of Cullen on their work in particular the emphasis on establishing significant contemporary placemaking on schemes in England, Scotland and Ireland.

In 1974 Gordon Cullen and David Gosling published their design for Maryculter, a new settlement located to the south west of Aberdeen. Most new residential developments – both regeneration projects within towns and cities and those on the periphery of established urban centres – fail to establish a sense of place or a strong and coherent identity.

In his presentation Proctor explained that a primary and starting principle is to establish a bold coherent narrative of place: anchoring new developments in their immediate and wider, historical, social, cultural and physical contexts - the distillation of place. This narrative is always visual invariably established and represented through drawings sometimes in the form of diagrams and cartoons a la Cullen .

These principles for placemaking appear to be more designerly than the more process led ones set out in the DCFW government guide to placemaking .[2]

All this echoes Gordon Cullen from way back in 1955, Nairn’s collaborator in that series of Outrage articles from the architectural review and author of and master of townscape elevates the importance of visual planning and product over process. Cullen turned to what he called ‘the faculty of sight ‘, ‘for it is almost entirely through vision that the environment is apprehended’. [3]

In the introduction to Townscape Cullen urged that we have to rid ourselves of the thought that the excitement and drama that we seek can be born out of the scientific research and that we must turn to other values and other standards. Cullen turned to what he called ‘the faculty of sight ‘, for it is almost entirely through vision that the environment is apprehended. [4] This is followed by the establishment of a clear definition of neighbourhood boundaries and thresholds and the development of a clear spatial hierarchy of parks, streets,squares, lanes and mews.

This is all treated very seriously throughout the Proctor Matthews practice and takes time, curiosity, wisdom, imagination and is beautifully drawn out, to the degree that these early drawings, cartoons and other visuals are the ones that clients and developers constantly refer to in favour of more scenographic ‘finished’ CGi’s.

[1] Proctor & Matthews identity and place: where do