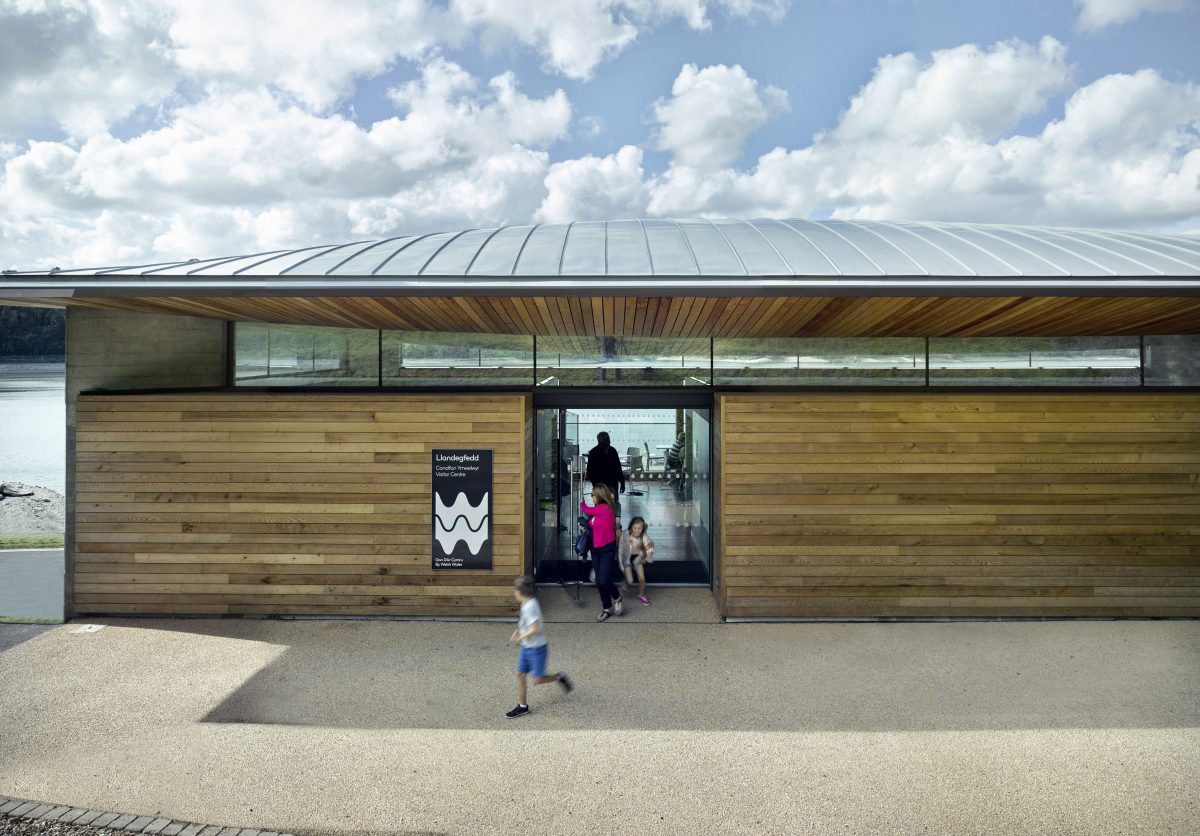 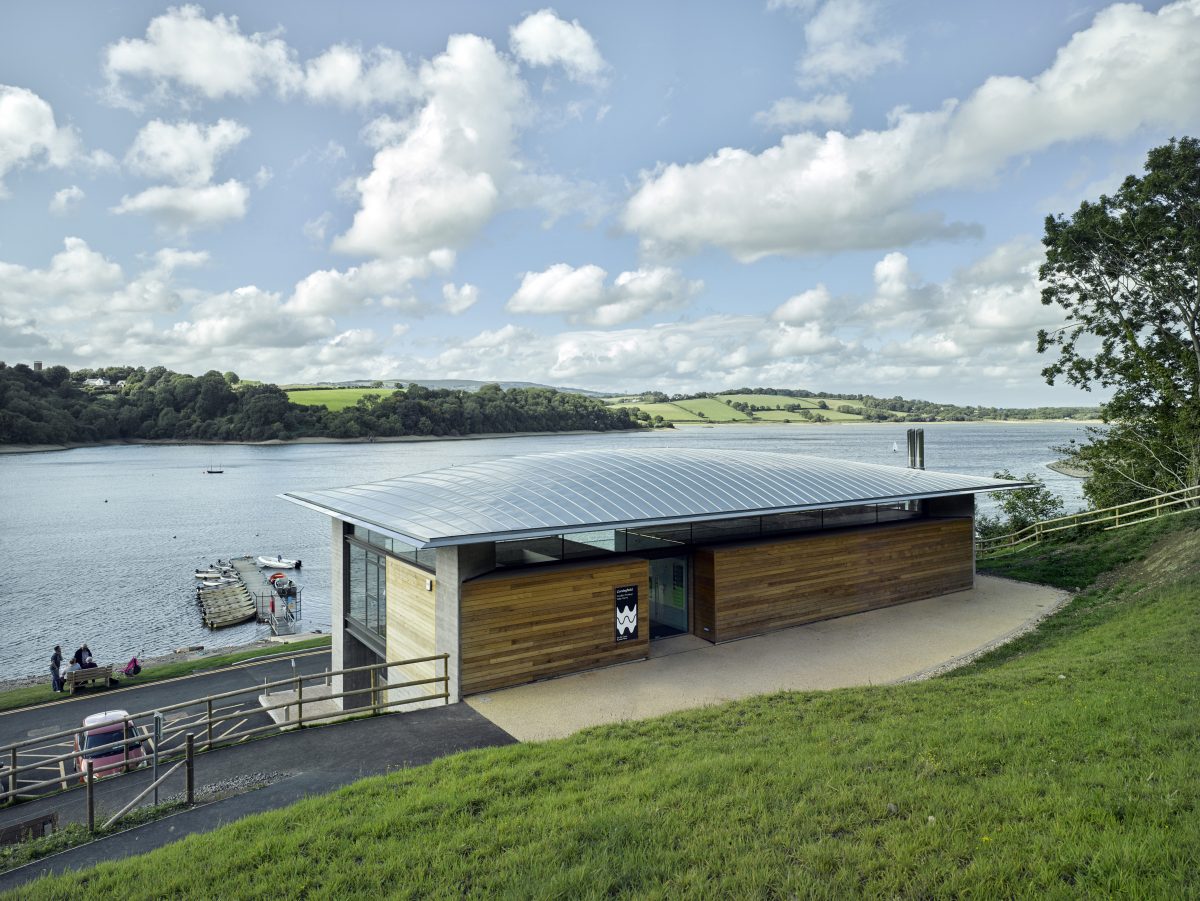 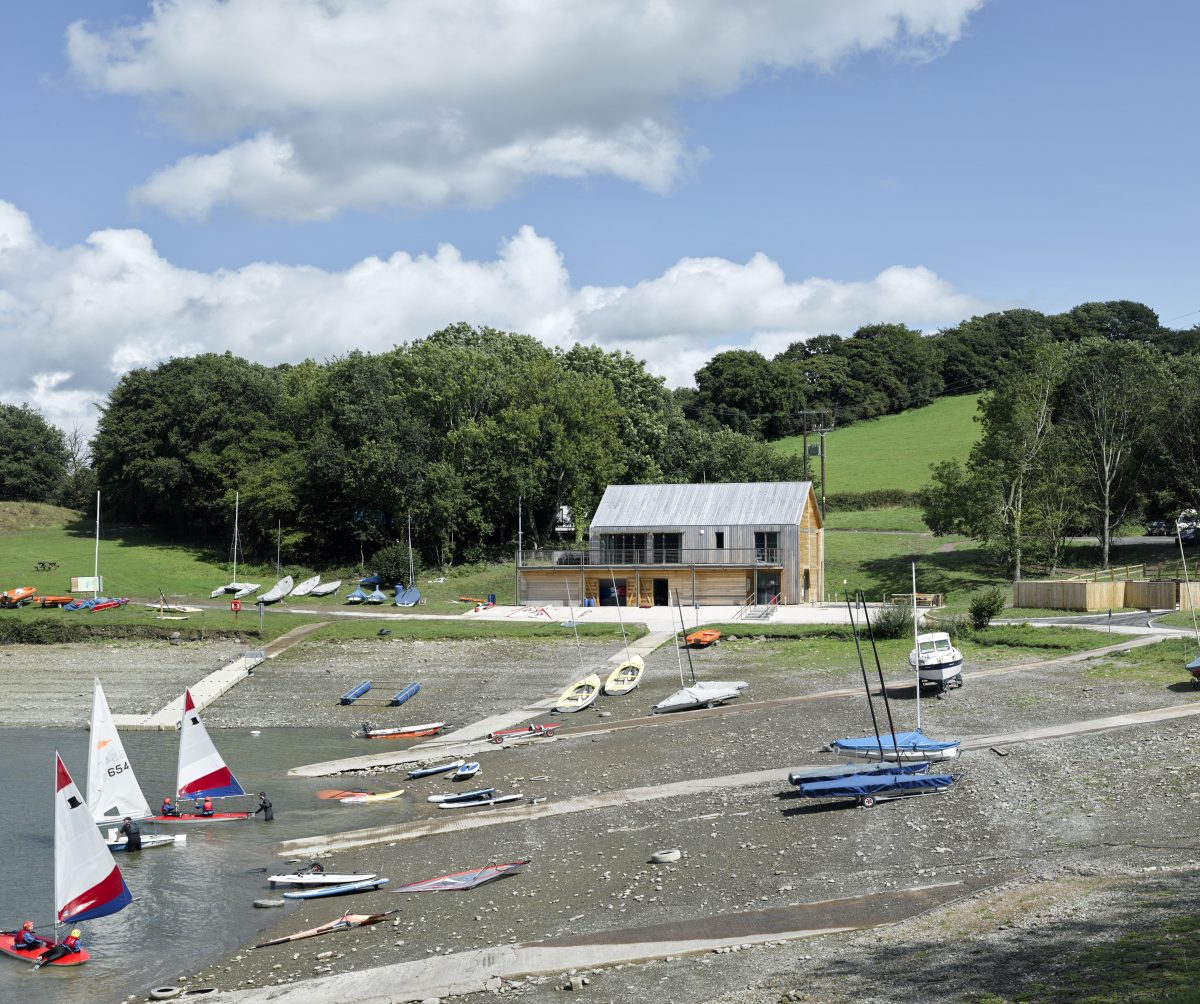 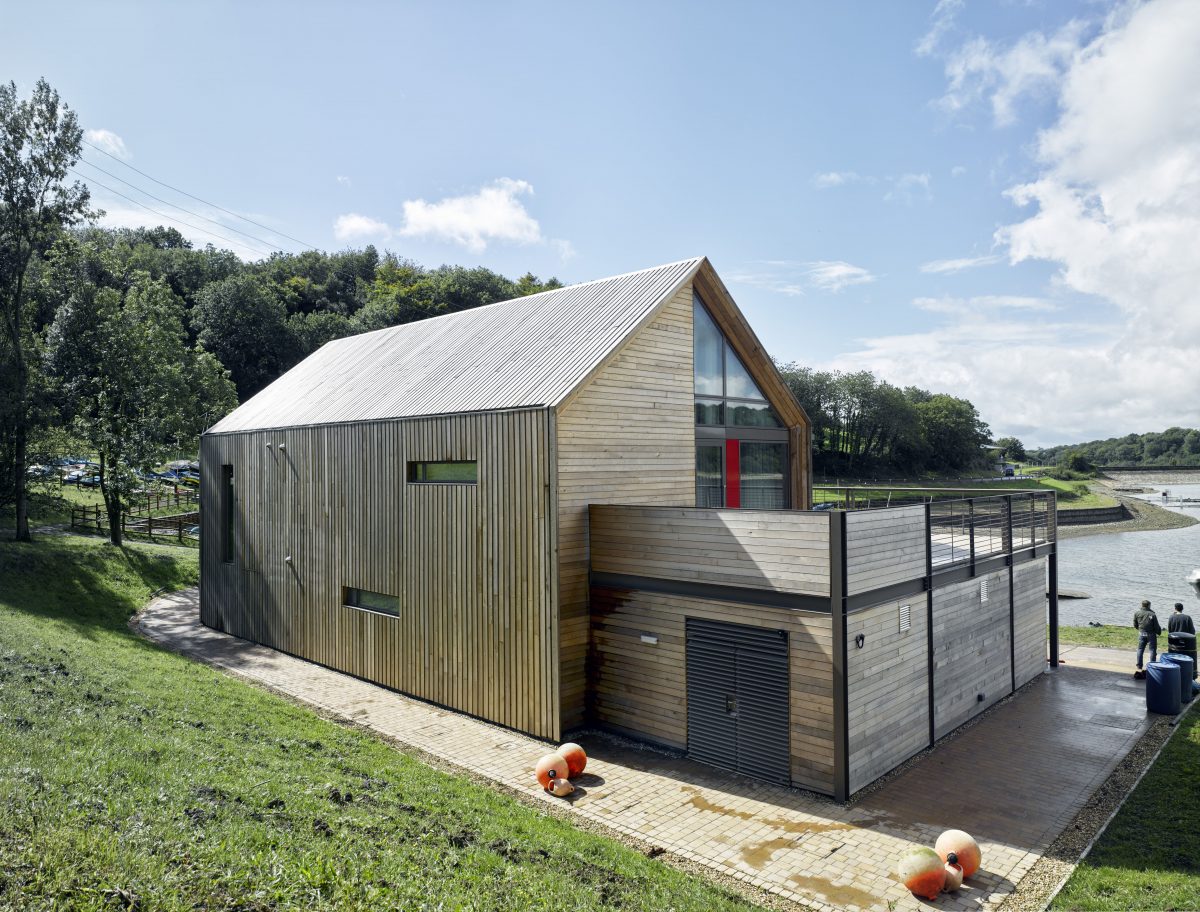 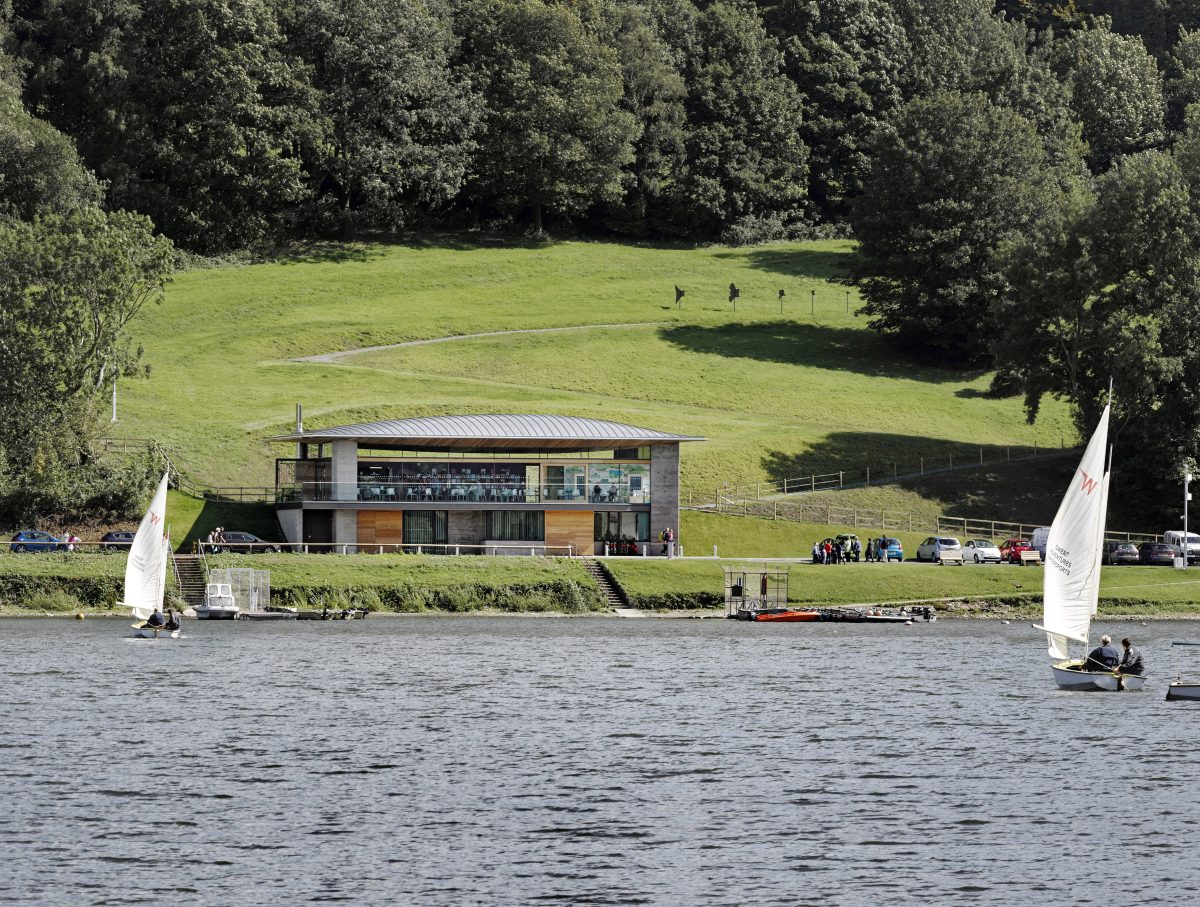 Wishing to improve public accessibility to their facilities, Dwr Cymru Welsh Water developed a brief identifying that two distinct facilities were required at Llandegfedd Reservoir, its largest water body in close proximity to the main population centres of South Wales.  A 550m2 visitor centre needed to cater for reservoir management, park rangers, fishermen and members of the public wishing to enjoy the tranquil setting. Additionally, a 320m2 watersports centre was sought to replace the inadequate modular accommodation that served a long-established watersports school and sailing club.  The retention of an existing public car park was essential to delivering the overall project within a budget of £2m, including external works. Following an invited two-stage design competition, Hall + Bednarczyk was chosen by Welsh Water and appointed to lead a team of consultants up to full detail design.

Given the relatively modest scale of building called for in the brief, the visitor centre seeks to establish an expansive and welcoming environment, capturing its setting in a manner that expresses its public purpose. The key visitor spaces - a café and explanatory display area - are accessed directly at first floor level, establishing panoramic balcony views over the reservoir. Approached from the car park above, the pathway descent to the lakeside building presents the fluid zinc roof form as a fifth elevation that resembles a scooped-out rectangular gulp of the water beyond.

On the ground floor, Welsh Water’s rangers occupy offices that can closely monitor the comings and goings of the reservoir’s users. Back of house spaces are arranged along the rear of the plan where the building hunkers into the banked hillside of the site.

Designed in close consultation with its users, the watersports centre evolved as a flexible and refined form of boatshed placed alongside the water’s edge. Rescue craft, equipment storage and changing room facilities take up the ground floor while a large multifunction clubhouse room on the first floor spills out on to a generous balcony and captures fine views of racing.  The building employs a cost-effective steel frame that offers the flexibility of large spans and can straightforwardly cater for future adaptation of the building’s internal plan without compromising overall structural stiffness. The building envelope (including the roof) is clad in cedar that is intended to weather down to a low-key silver finish very much at home in its picturesque landscape setting. Carefully considered detailing, particularly evident in the gables and eaves, is intended to ensure that this timber building appears crisp in its execution rather than rustic. The steel frame is revealed in expressed external columns which define the bays of the ground floor and provide structural rigidity to the balcony.

Public consultation was undertaken through community presentations and the contemporary designs established support as a valid response to the site’s sensitive landscape context. The project was delivered through a Traditional JCT Contract with Hall + Bednarczyk’s oversight of the two buildings alongside DCWW’s in-house capital infrastructure team.  A local building contractor based in Abergavenny delivered the buildings to a high standard over the course of a 15 month project timetable.

The paired buildings have provided a considerable social catalyst for public engagement with the reservoir both on and off the water, exceeding Welsh Water’s already ambitious plans for greatly increased visitor numbers. A site of considerable beauty, both natural and man-made, has become a tangibly welcoming place where Welsh Water’s community-led ethos is in clear evidence.

Dwr Cymru Welsh Water operates to a charter that extends beyond providing clean water and sewerage for its 3 million customers by reinvesting any financial surplus to benefit the community in Wales.  A 550m2 visitor centre caters for members of the public wishing to enjoy the tranquil setting, as well as providing accommodation for reservoir management, park rangers and fishermen. Additionally, a 300m2 watersports centre replaces the inadequate modular accommodation that served a long-established watersports school and sailing club.  The project provides a considerable social catalyst for public engagement with the reservoir both on and off the water and the popularity of the buildings helps to ensure that the site can sustain its future as a cherished social amenity for a broad range of users.

The retention of an existing public car park was essential to delivering the overall project within a budget of £2m, including external works. Cycling to the site has been successfully encouraged, and parking provision for coaches and minibuses markedly increased.

Tailored approaches to sustainable design were applied to the two new buildings reflecting their markedly different internal energy requirements and distinct external envelopes. Offsetting the adverse BREEAM scoring implications of Llandegfedd’s isolated rural location, where electricity is the only available mains-supplied utility and public transport links are limited, pragmatic decisions were taken to enhance sustainability. The project’s EPC Rating of Band B (scoring close to an A Rating) reflects the effort applied to creating thermally efficient building envelopes.

Fundamental decisions regarding the positioning of both buildings enable their window orientation to benefit from passive solar heat gain as well as the most desirable views of the site. Each incorporates a user-controlled flexibility that avoids the need for air conditioning. Opening windows at high level enable background through-ventilation whilst large sliding glass doors permit purge ventilation on the hottest of days, when the lake cools the natural breezes. Horizontally fixed louvres shade the SW windows of the watersports centre.  Generous overhangs on the Visitor Centre’s roof protect against excessive solar heat gain on the substantially glazed SW elevation.

Due to Welsh Water’s ongoing operational need to adjust the depth of the reservoir, intentions to integrate a lake source heat pump were adapted to a 12kW air source heat pump capable of meeting all of the 550m2 visitor centre’s space heating requirements. Complimenting this, both buildings employ underfloor heating to distribute heat to the occupants of large rooms - an approach that is similarly effective in drying out wet-floored changing rooms. The watersports centre presents an unusual requirement for hot water due to the sporadic surges in demand that correspond with weekend sailing events, where up to 100 hot showers may suddenly be needed in a short timeframe. Hot water demand is therefore met with instantaneous electric zip heating, which avoids heat loss through storage or pipe transfer.

“Of all the projects we visited, this was the most fully resolved architecturally from the initial idea of sitting two buildings on the shore of the reservoir through to the high standard of construction that was achieved…These exceptional buildings have settled into their surroundings and prove themselves in use. We expect them to remain fine works of architecture throughout their working life, and to be recognised as such by future generations.” Eisteddfod Gold Medal Judge and Architect Alan Francis