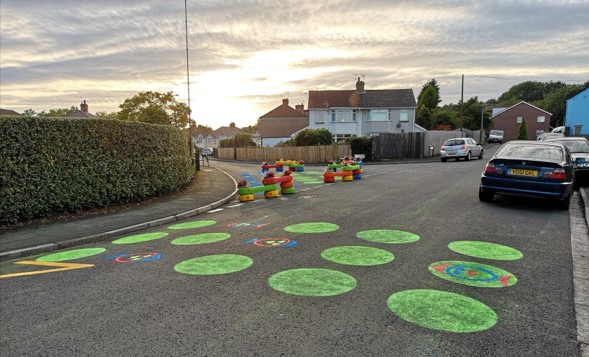 Llwybr Newydd (2021) outlines a vision of a Wales travelling more sustainably, with modal shift to encourage higher levels of walking and cycling, at the heart of the document. This is a significant commitment that will require a change in approach to how we develop transport proposals and more broadly, how we consider our streets in general.

Road safety figures paint a picture of inequity, with some of the most vulnerable in society, such as the young, being particularly prejudiced. In 2015, 40% of accidents involving children, happened during the school run. In response, we have taken to protecting our children by ferrying them back and forth in cars and thus reinforcing the dominance of motor vehicles on our streets. For a considerable number of years, Sustrans have worked within the schools setting, exploring approaches that engage communities and aim to address some of these inequities.

In September 2019, following a co-design process involving students, parents and local residents at St Davis's R C Primary School in Newport, Sustrans trialled a number of interventions using colourful, planted water filled modules (Street Kit) and chalk. Workshops with the school and local residents had identified that congestion at school drop off and pick up times had resulted in a number of specific issues including; parents and children being forced onto narrow pavements and lack of crossings.

As part of the development process, Artificial Intelligence (AI) cameras had been used to capture a number of behaviours within the street, including traffic speeds and volumes, crossing behaviour, desire lines and interactions such as yield rates on the road in front of the school.

The street outside the school was closed to vehicles during an afternoon and with the help of the school and local residents, areas of the carriageway around the school were reclaimed using water filled planters and a new crossing was created using chalk markings. The road was reopened and the interventions were left in place for a number of days. AI cameras were used to record changes in behaviour.

The results threw up some interesting findings. The number of cars slowing or stopping (yielding) to allow parents and children to cross at the new chalked crossing location increased by 63% during the days monitored. More striking however, was the change in traffic speeds witnessed following the trial, with speeds reducing by around a third from that prior to the installation.

The results of this trial perhaps don't hold up against rigorous scrutiny, for example, how would behaviours revert over time? However, demonstrating that using materials such as chalk to 'tweak' the sense of place and change behaviours, merits some exploration.

Sustrans have now carried out a number of research projects considering and measuring the impact of light touch and similar Tactical Urbanism type interventions. The findings of these projects have evidenced a range of outcomes, including the reduced impact of vehicles, and pedestrian behaviours that indicate higher levels of empowerment with their streets. So the question is, ‘what roles can a piece of chalk have in changing our public realm for the better’?