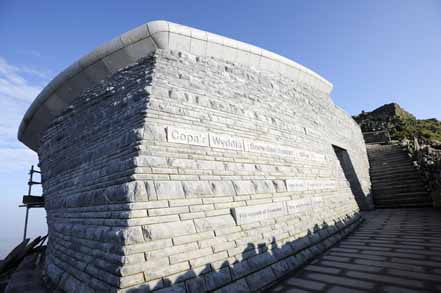 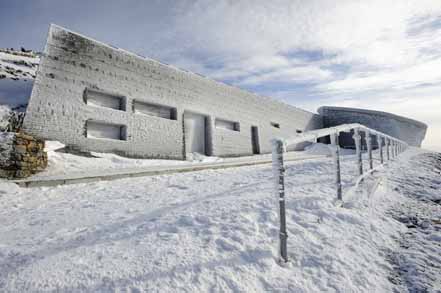 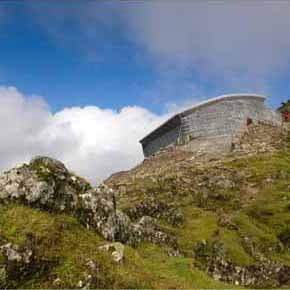 The extreme nature of the weather and the logistical difficulties meant that the design team and client effectively developed the brief together in response to the conditions, measuring the outcomes in relation to the quality of facility achievable, capital costs, lifecycle costs, affect on Railway business and income, eligibility for funding, projected building life and sustainable development principles.

The building sits not only at the Snowdon summit in the protected landscape of the National Park but is also located in a Site of Special Scientific Interest (SSSI). This meant there was potential for the scheme to become the focus of controversy and the client and planning authority, Snowdonia National Park considered it crucial that the design process was as inclusive as possible. The team therefore consulted with a wide range of interest groups including walkers, climbers, train passengers, the railway operators, local farmers, land owners, local communities, politicians, environmentalists and the Design Commission for Wales.

In order to arrive at the design solution, the team carefully analysed the existing building to explore opportunities to reuse parts of it as despite its very poor condition, any potential re-use offered significant environmental benefits and a reduction in capital costs. Out of this process emerged a design solution which occupied a similar volume to the existing building and proposed the re-use of the existing slab and spine accommodation that was already partially buried in the mountain. However, detailed site investigations revealed that much of the original structure, which they originally hoped to retain, was in such poor condition that its long term performance could not be guaranteed and so reluctantly, most of it was demolished.

Due to the severity of the mountain conditions and the level of risk involved, it was necessary to appoint a contractor early in the process so that the design could evolve in parallel with the method of construction. This early collaboration helped to secure a guaranteed price for the project, within the strictly limited funds available for the scheme.

The foundations consist of precast concrete containers which were filled with rubble at the summit to provide ballast – concrete could neither be pumped nor mixed on the summit. The primary frame was constructed from galvanised steel sections which had to be sized to resist the significant wind speed and snow loadings, to which the building would be subject. In order to optimise the frame design special 3-D software was used to model the building and efficiently calculate load paths. This also needed to take into account the temporary stability of the frame as it was being erected in stages. The whole building was clad with an aluminium standing seam roofing system specially modelled to take account of the geometry. The roof sections were considered too unstable to erect as single sheets and therefore a prefabricated system was developed with Corus which enabled the roof and secondary support structure to be assembled in bays at sea level. These were carefully sized to fit on the narrow gauge train and once hoisted into place, zipped together to form a water tight envelope.  The internal walls were also constructed from prefabricated sandwich panels to avoid wet trades associated with conventional internal construction and to speed up installation.

The external envelope of the building was clad in local granite, selected for its durability. Each of the granite blocks was scheduled and pre-cut before being transported to the summit, in order to save time. The granite has a rough finish and has been carefully arranged in varying height bands around the entire perimeter to reflect the sedimentary nature of much of the mountain, as if the building was formed from the rock. This horizontal ‘sedimentary’ language is continued inside where Welsh Oak battens have been used to create a simple cladding system, bringing warmth to the interior.

Snowdon’s summit was only accessible for construction via the 100 year old narrow gauge railway; helicopters were ruled out on grounds of safety. The extreme weather also meant that the summit could only be reached from April to October. Given the logistical complications and relatively small construction window, it was proposed to carry out a dry run of the construction by assembling the building in a large warehouse near Shotton. This enabled the design team and contractor to test and perfect construction techniques at sea level so that there were no surprises at the summit. Despite all the preparation, two of the worst summers on record significantly delayed the construction programme meaning that the building was not completed until October 2008.

From the outset the client recognised the importance of sustainable design and made it a key consideration, however the remote location of the site brought significant challenges. Firstly the building has to operate independently as it is not connected to any services supplies; all resources and materials have to be carefully conserved as they can only be transferred to and from the mountain via the railway. Secondly, the unpredictable weather conditions make it very difficult to harness natural energy sources. Finally, the extremes of climate significantly reduce the materials’ life expectancy. The building concept was also conceived in 2001, to far less stringent CO2 emissions targets than today’s standards.  Despite all these issues, the rigorous analysis and sustainable design approach adopted by the design team in the early stages meant that the final design still achieved a BREEAM Very Good rating in 2008.