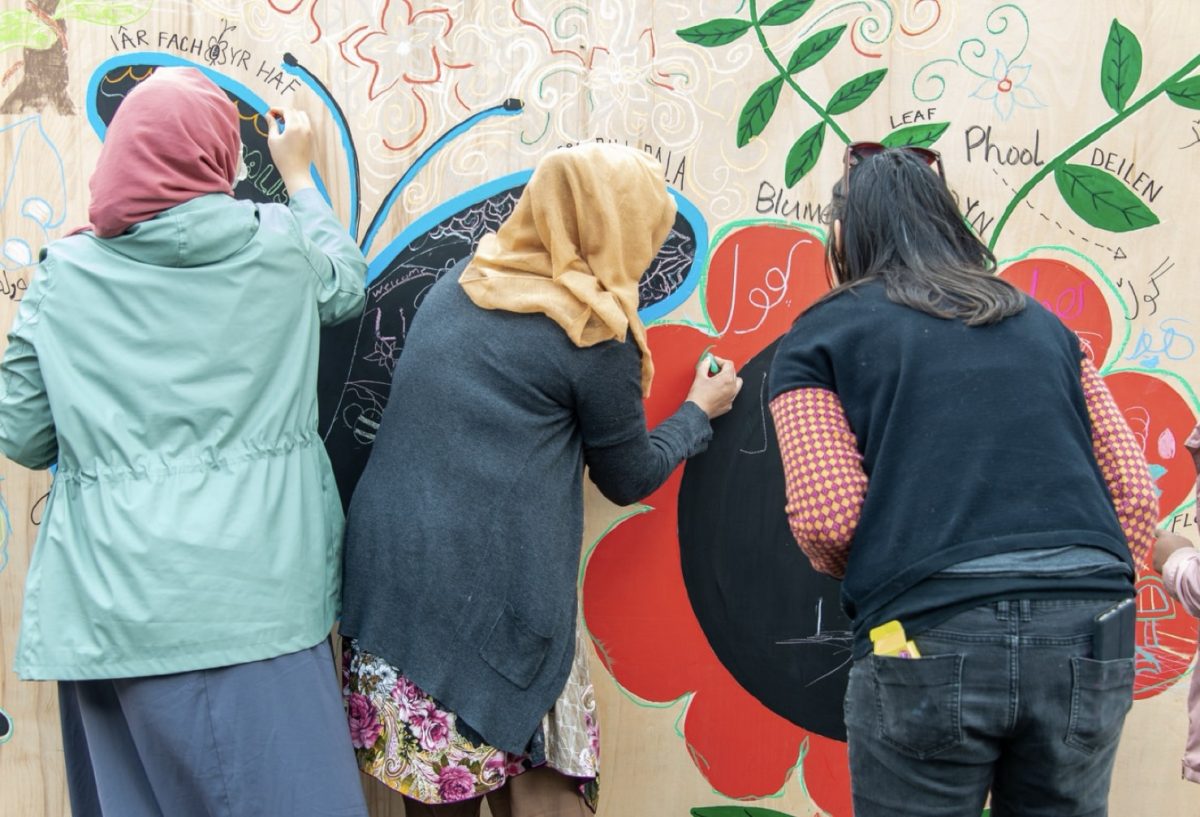 Ruth Essex, of Maindee Unlimited, tells us the placemaking story behind the development in Maindee, Newport

The Triangle started with a challenge: how could the community of Maindee, an inner-city neighbourhood in Newport, reopen and maintain essential public toilet services?

The closure of these toilets in 2017 had been a huge blow for shoppers and traders in the local shopping centre, and to people living nearby. It deepened inequality - disadvantaging the people who rely on public toilets - those of us with disabilities, those of us with bowel and bladder conditions, those of us without a home, and those of us who are elderly or have young children - we could all be affected.

The loss of the toilets was leading to anti-social behaviour around the building.

The Maindee Triangle development essentially began as a response to the simple need to retain a public toilet, but grew into a larger asset-transfer, renovation and landscaping project.

The development is still live and due to be opened in June 2022.

This Case Study will focus on how the local community has been involved in the evolution of the site.

Mainee Unlimited is a charity that was set up by local residents and organisations in the Maindee area following the reopening of the local library in 2015. Exploring the potential of the site together as a community and the need for active public engagement is central to the ethos of the charity.

The toilet block, and the surrounding public space sit opposite the library, and were both in obvious need of investment and improvement. In an area starved of greenery and public open space, it was a rare opportunity to increase amenity and improve well-being.

The project gained momentum through funding and support from the Arts Council Wales scheme Ideas: People: Places. This funding enabled a creative process - encouraging people to understand the site and reimagine its future.

The funding also enabled Maindee Unlimited to begin to work with KHBT architects to further develop design ideas. Their design process focused on an archaeological approach - excavating the story of the site and valuing its components.

The role of creativity was key in re-engaging local people with a site which had suffered long-term degeneration and was impacted by deep set negative perceptions associated with street drinking and drug taking. Artists were commissioned to create events and projects on the site, in order to develop positive associations, new memories of the space and expand the perception of what is possible.

One of these events was ‘Inviting the Neighbours to Paint’ curated by performers Mr and Mrs Clarke. The space was turned into an outdoor community art room for a week, and photographer Dafydd Williams turned a toilet cubicle into a camera obscura and took portraits of local residents in the garden. A range of community events took place in the Triangle to test uses such as an outdoor market.

Maindee Unlimited also hosted a community seminar ‘Toilets, Public Space and Social Justice’. This was an opportunity for local residents and agencies to meet and discuss with world leading public toilet experts and academics such as Clara Greed from the University of the West of England, Jo-Anne Bichard from Royal Society of the Arts and Charles Musselwhite of Swansea University. This provided the space for learning and debate, and to consider the politics of public space. It also provided information regarding the implications of communities having to run public facilities like public toilets.

These activities alongside the design work of KHBT galvanised imagination and momentum which eventually led to an asset transfer of the site from Newport City Council to Maindee Unlimited on a 99 year lease.

Funding was secured from the Welsh Government and the National Lottery in order to create a fully renovated and landscaped community café, community garden and public toilet.

Throughout the development phase, a project manager was contracted in order to maintain the public engagement, including facilitating events and actions.

Plywood hoarding, used as a site boundary, was turned into an art wall and community notice board in order to engage the local community. An event was held which turned the street adjacent to the site into a play street, following the principles of Playing Out, and supported by Play Wales.

Additionally, the tender brief and selection process for a café operator prioritised the role of the café in actively engaging the local community - including a desire to collaborate on future play streets events to periodically extend to the public garden into the street.

In the future, Greening Maindee, the community gardening group, hopes to involve local people in the planting of the garden, with the view that gradually local residents will become increasingly involved in the day to day running of the green space.

The Triangle will be opening in summer 2022, after a long period of development.

It has been initiated by, driven by, and co-designed by members of the local community, and is controlled by a community organisation. This has required a huge effort from volunteers and trustees of Maindee Unlimited. 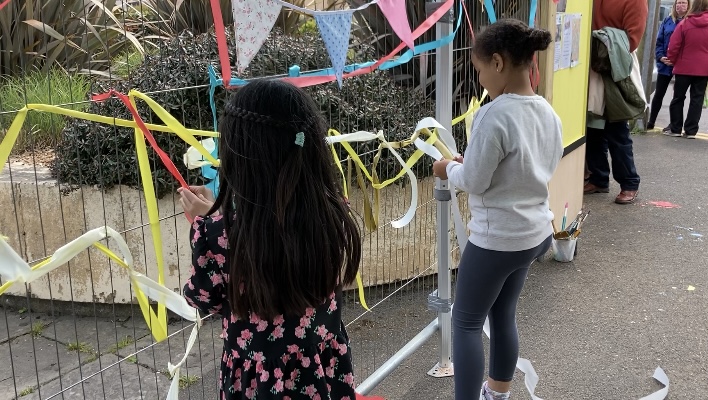 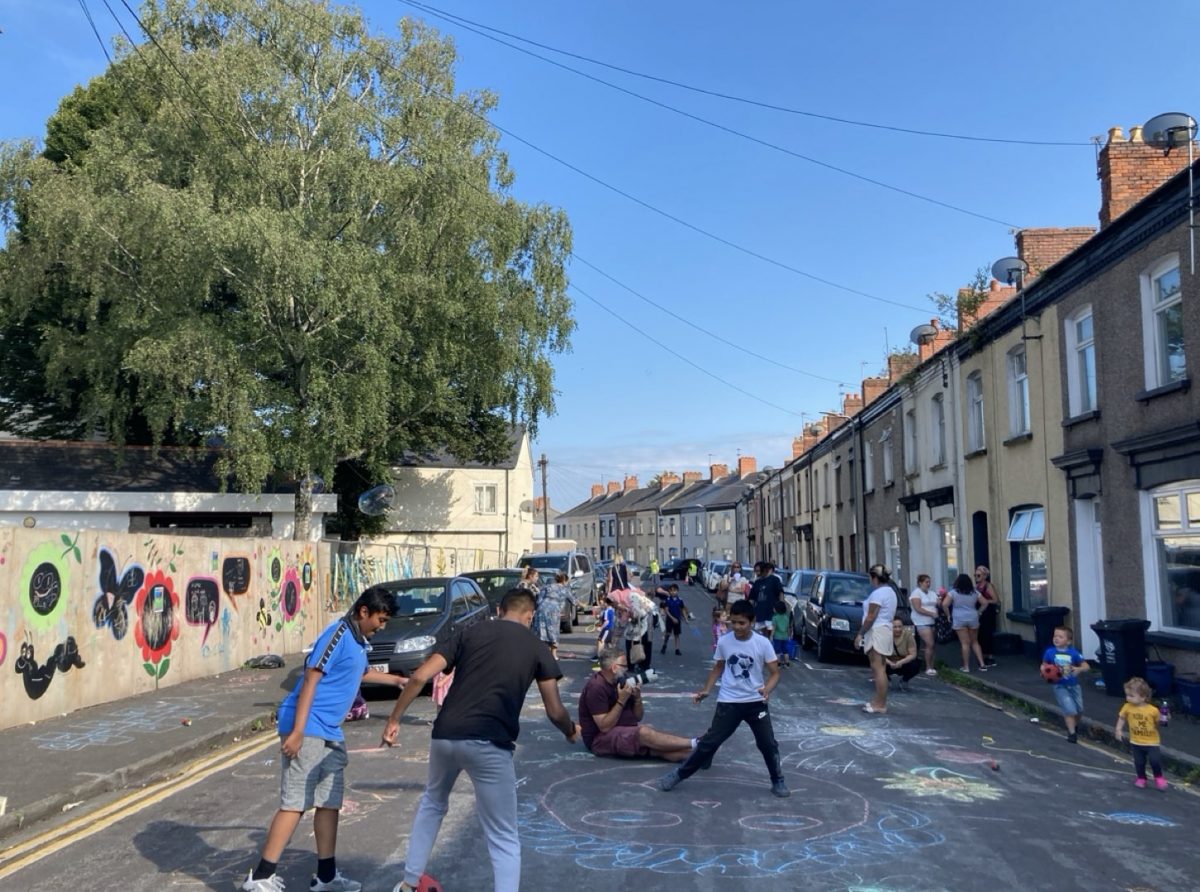