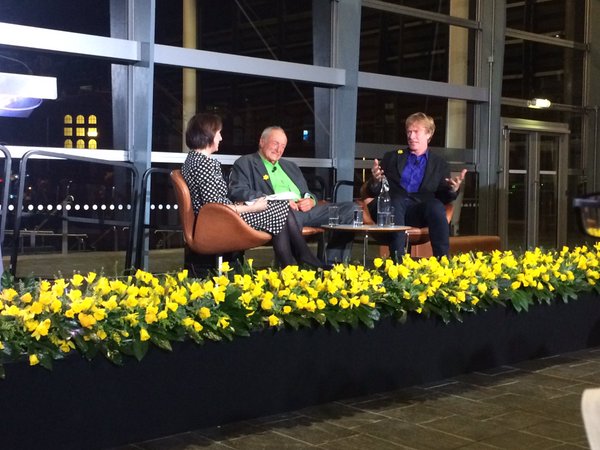 Carole-Anne Davies, Chief Executive at Design Commission for Wales, reflects on the National Assembly for Wales’s Building for Democracy event which took place on Tuesday 1st March 2016 at the Senedd.

Yesterday morning the Senedd was unusually busy. The whole building was decorated with daffodils, microphones were in place, cameras and mobile 'phones buzzed, media people touched base. A St David's Day at the Senedd is always special but this year marks its 10th birthday. All day, choirs, school groups and individuals took their places and told their stories of the National Assembly and of the Senedd - its home, for a decade of devolution and different democracy in Wales.

Last evening, a kind of birthday reunion brought Rogers Stirk Harbour Partners architects back together with key players and members of the project team. Deftly handled by Menna Richards, the conversation that unfolded at this RSAW event was a warm, candid reflection.

The stories of a clear brief for an architectural competition that sought ideas, not designs as such, meandered through familiar territory: the need for transparency reflective of democracy; the aim for a very public building; a non-hierarchical chamber for a new democratic process; a benchmark exemplar of sustainability for a client with the sustainable development principle enshrined in its core. And a client that, technically, didn't yet exist.

Ivan Harbour, in a double hander with his business partner and mentor Lord Rogers, is quick to acknowledge that what makes this building work is the public ownership; the care and warm familiarity of the people of Wales that give it its spirit. That's impossible to draw or design, he admits.

And so we hear about the journey from the power of an idea, a few key principles and the leadership of a handful of key individuals: Lord Elis Thomas then Presiding Officer, Sue Essex, then Assembly Member and Minister and Richard Wilson, a senior civil servant who understood the importance of good buildings.

The chequered history is well document and this is not the only success story where the architects have been hired, dramatically un-hired, and perhaps slightly less publicly hired again, to get on with the job. A bumpy ride, says Lord Rogers, comes with architectural terrain.

More than this though, Harbour reminds us that this was the first time - there were no benchmarks. Few in the industry had any idea what an exemplary debating chamber actually cost. They cost what the industry is prepared to deliver them for and very few had at that time, been delivered. Time, quality and cost, that golden triangle of project trade-offs were no less present here. Speed though, was a crucial factor and not unproblematic in a project that was to be an exemplar first on so many levels.

Sustainability, some 18 years ago when the project really took shape, was a very unusual core client requirement. Today the Senedd remains ahead of its time. It is single glazed. Naturally ventilated, highly energy efficient and, as confirmed yesterday, the cooling equipment designed in for the chamber has never been used. The whole building functions as it was designed.

Both architects are generous to the other design disciplines acknowledging the engineering feat that keeps that floating roof, well, afloat. They are generous in their acknowledgment of the need for a whole design team to understand and play their role in the evolution of an idea, of what's behind the brief; to address the constraints - the salt air, the road, the rescue of public realm, and the need to allow for increased security measures over time.

The importance of organised processes, the role every person plays in a design team, conducted and choreographed by the architect was continually emphasised by Ivan Harbour. It's vital, he said, to understand that design processes involve a set of thoughts, actions and reactions as the team responds and the architect synthesizes and plays to all their strengths, rather than buckle under the challenge.

When quizzed, neither was sure if they might do anything differently. Both were clearly delighted at how the Senedd is being used by citizens, as part of the city. The emotional connection is tangible, says Harbour - it's extraordinary. The sense of the Senedd being comfortable, well loved and well used, embracing the ebb and flow of people, still pulls him up short, makes even him let out a 'wow'.

Are the materials a cliché? Welsh slate has roofed the UK, Harbour says, and it's a spectacularly good flooring material of durability and beauty. That's no cliché.

The Senedd is renowned for its sustainability, its transparency and its role as a turning point building. Lord Rogers is clear that people have made it a success - you've done it, he says. You've taken it over. There is more talk of maintenance, of learning from buildings and of essential spirit. And as we draw near to closing, Ivan Harbour shares a gem that has perhaps at times been unhelpfully distorted in the retelling of this story to date.

After the competition, he says, images were rendered for public consumption in the press. The project was largely well received, there were warm murmurings and talk of next steps. But, he says, the beginning of the betterment of the design started in earnest with the reaction of Disability Wales and the notion that the first Welsh parliament building for c600 years might not be available to all, changed the game. These were the first and biggest contributors, he says, to creating a building genuinely designed for everyone.