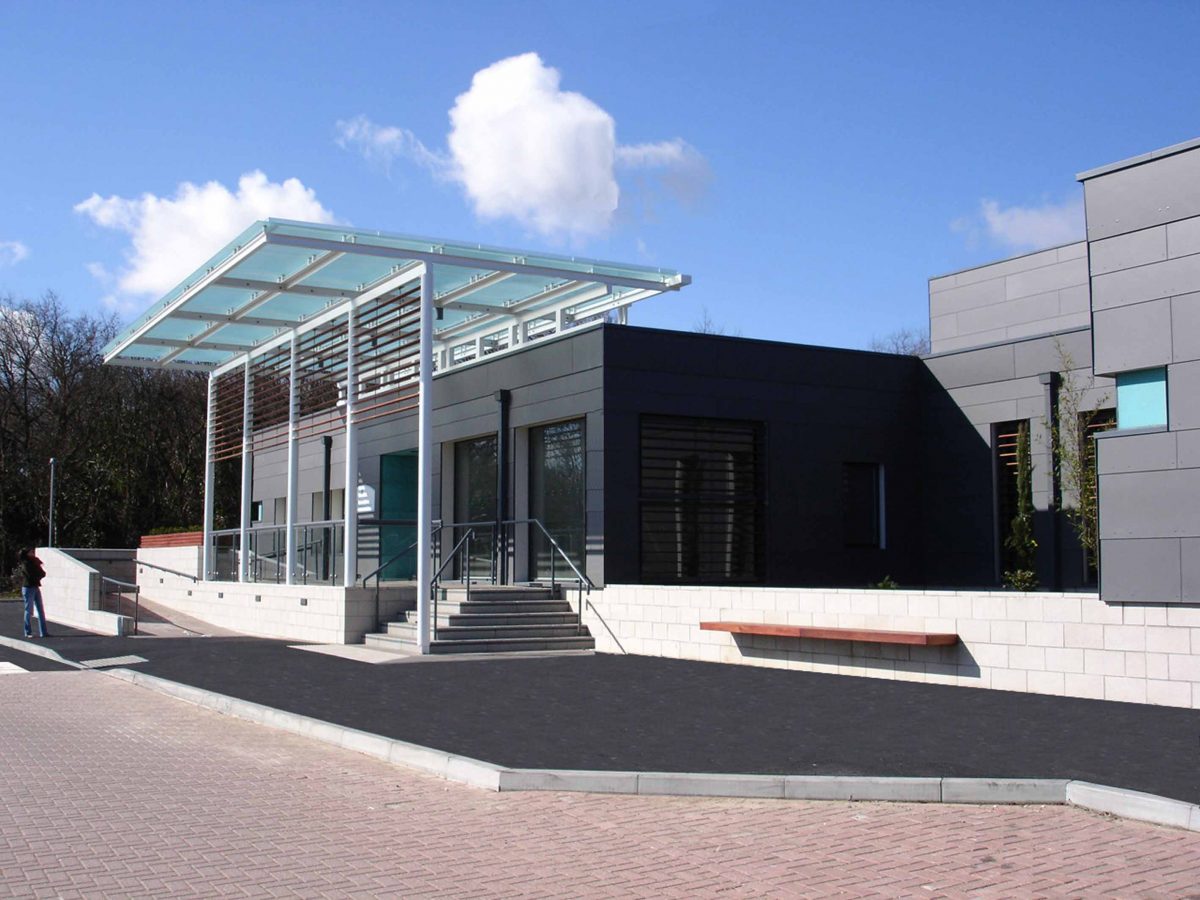 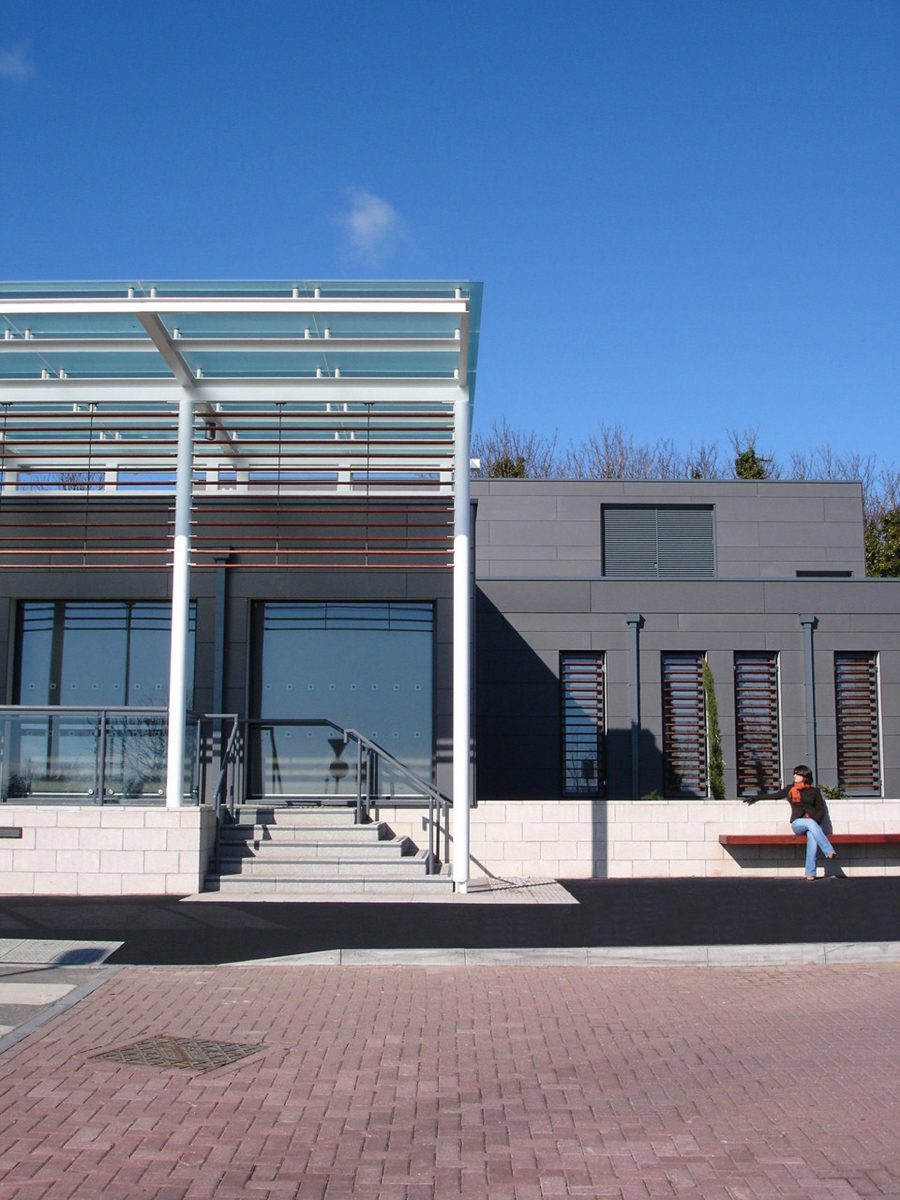 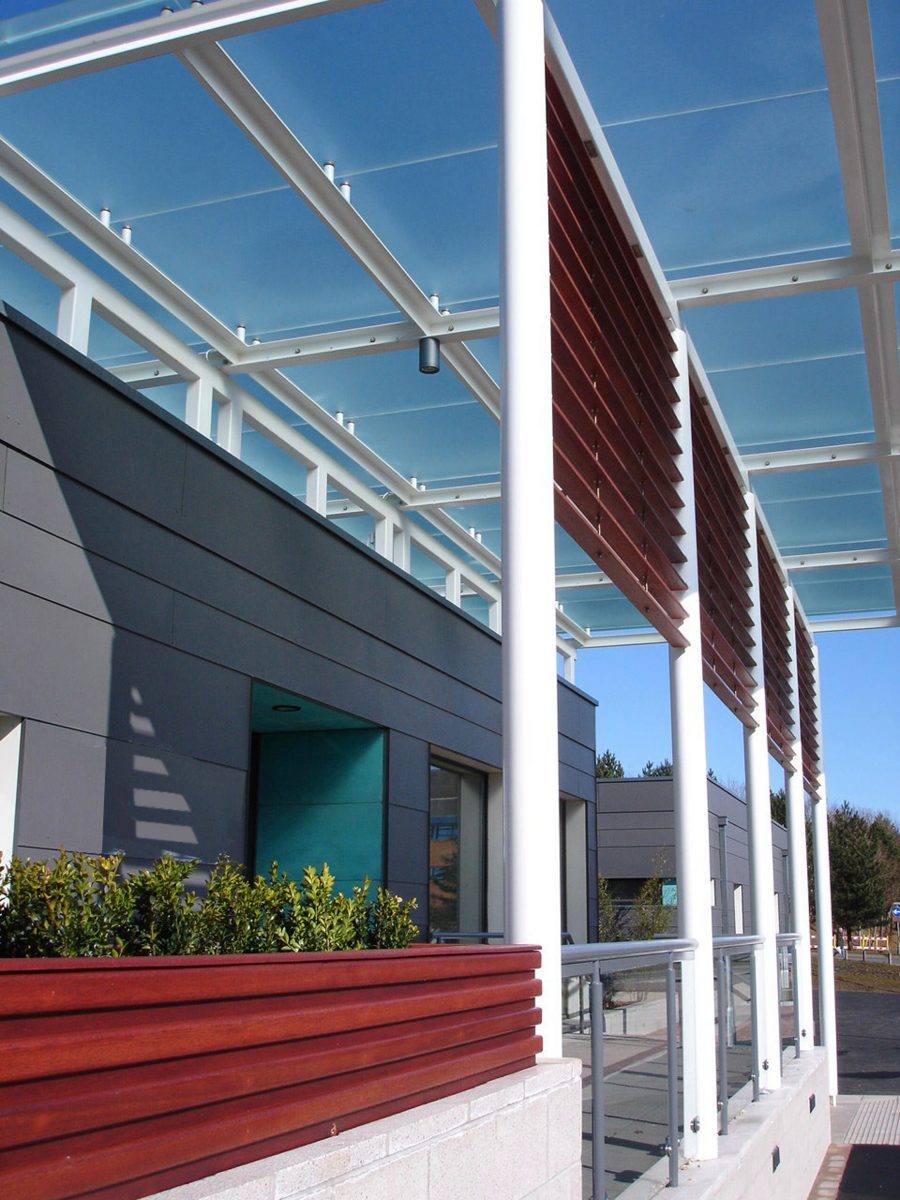 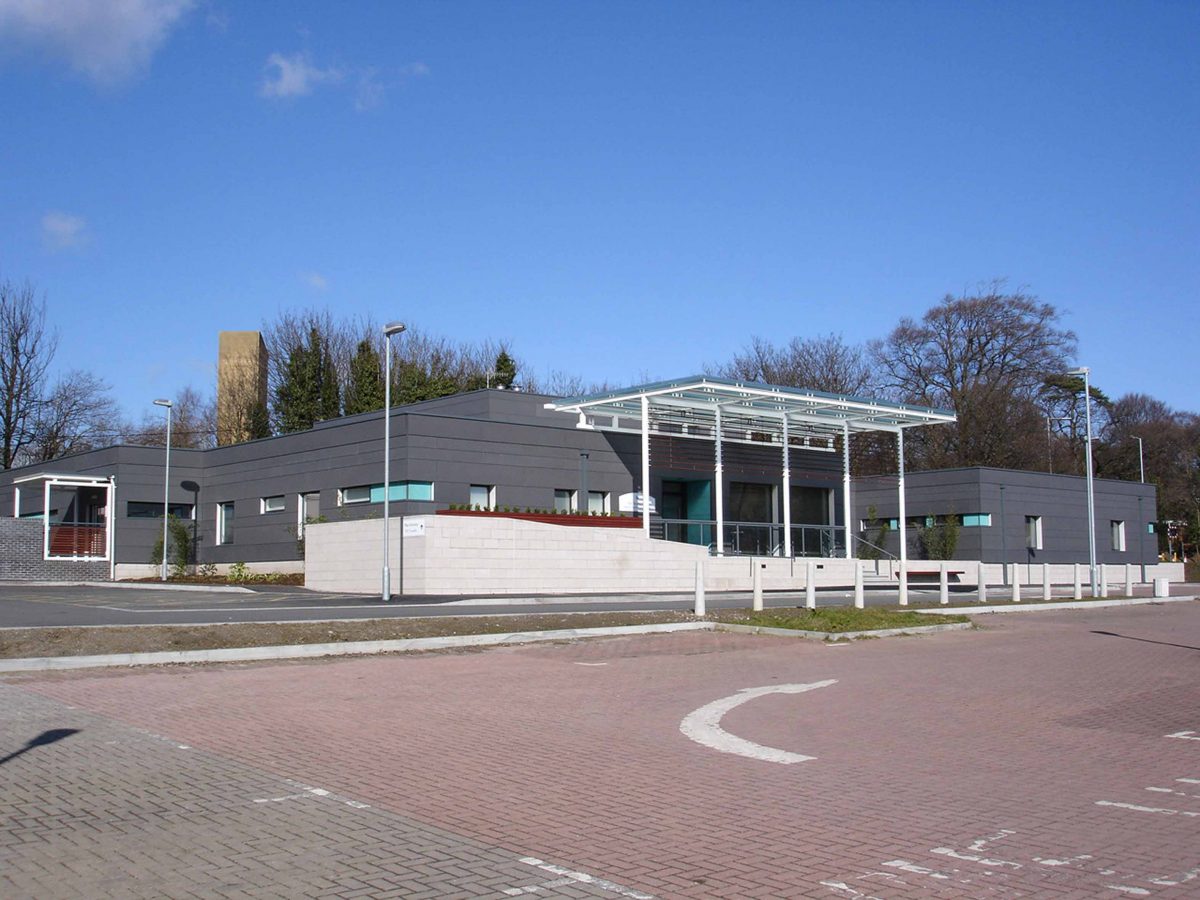 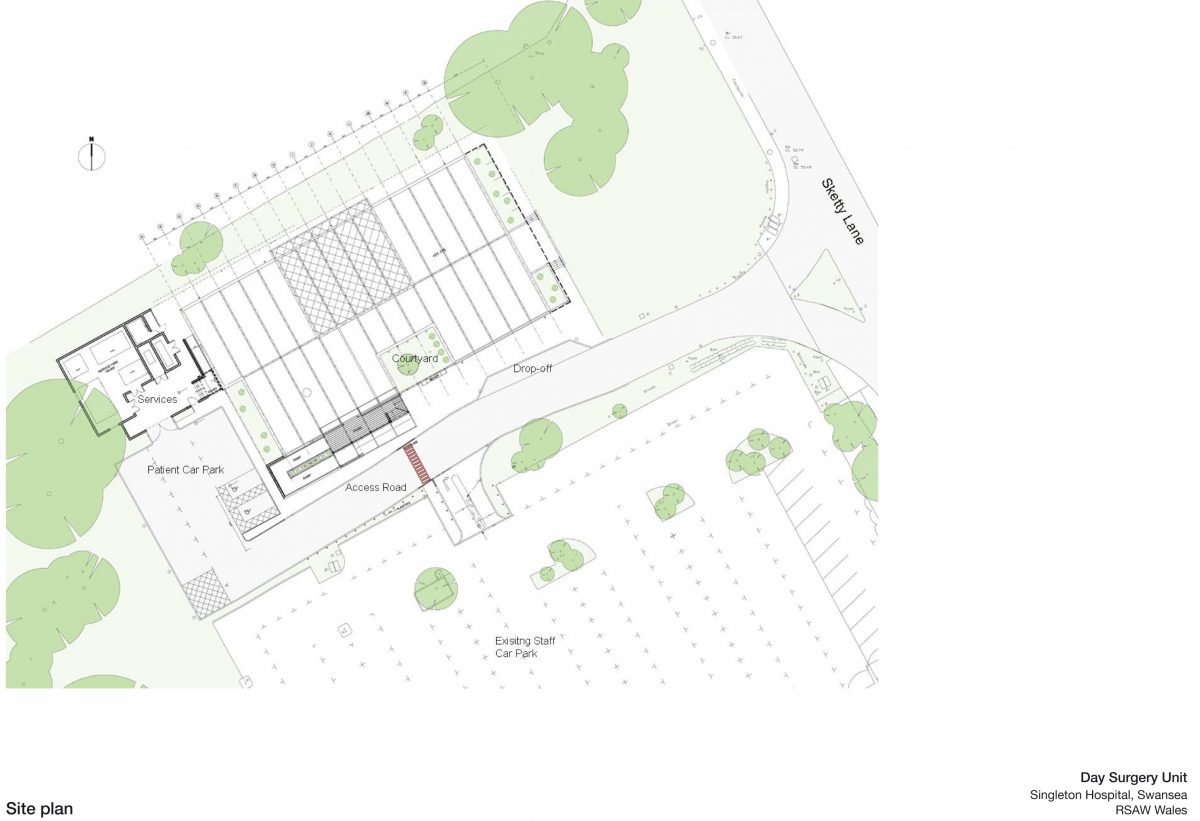 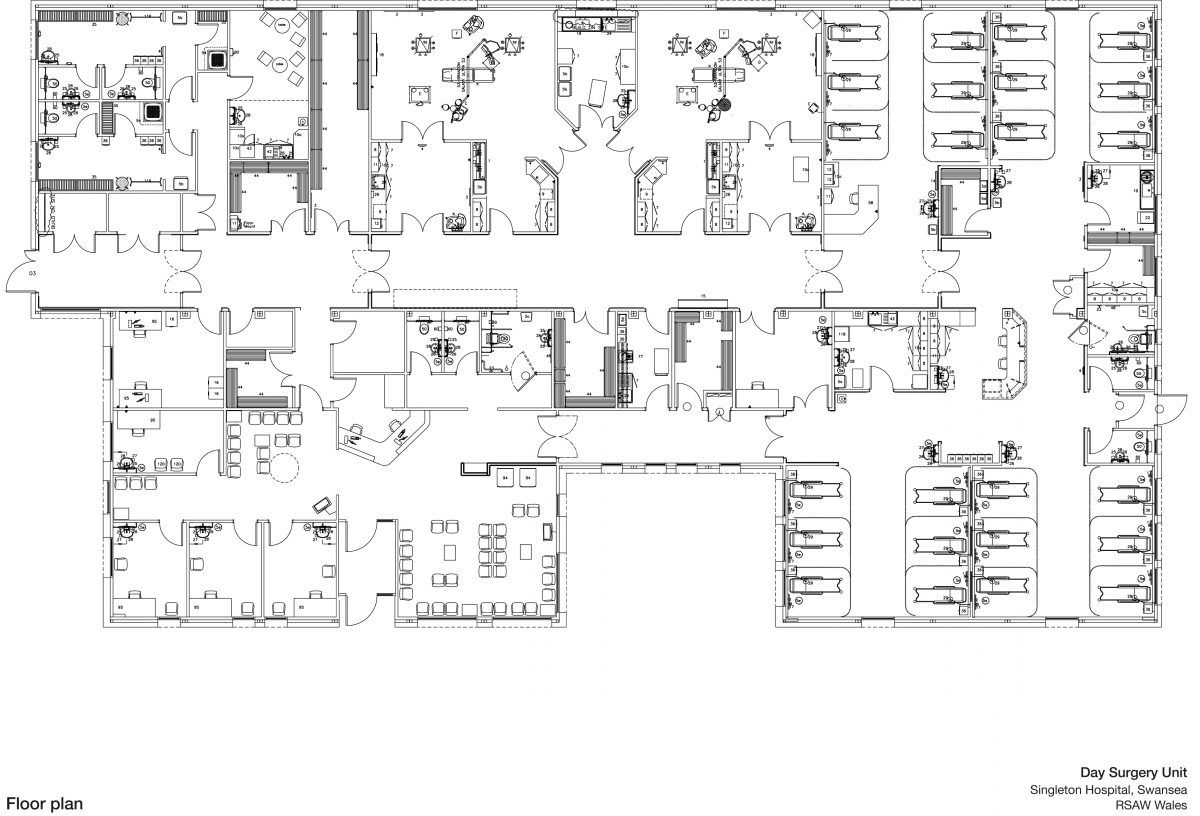 Singleton Hospital Day Surgery Unit required two new operating theatres and a 24 bed recovery suite, with pre-assessment facilities and staff support spaces. The challenge was to provide the facilities, creating an environment to enhance both the patient and staff well being, within the shortest timeframe achievable. The site for the development is at the northern end of the existing Singleton Hospital car park, across Sketty Lane, from the main hospital complex.
The development site is at the highest point of the Singleton Hospital West car park which slopes steadily down to the south. It is bordered on three sides by existing landscape with the main views from the site to the south out over the car park to Swansea Bay and to the west across Oystermouth to Mumbles, its Pier and Lighthouse. Opportunities for framing these views and screening the parked cars are exploited by the elevated position of the unit which through its precise siting also optimises the ground works, cut and retention, required.

Design Process
The building is roughly rectangular and orientated west-east along its long axis and north-south across the short axis. This responds efficiently to the slope and maximises the southerly aspect and views.

On the east west axis the building is set back from Sketty Lane beyond the group of existing trees to frame the westerly view. On the north south axis the building is located close to the line of the existing access/exit lane to ensure as level an access to the unit as possible. The result is the building itself is able to effectively act as a screen to the delivery and services area at the north west corner of the site.

Cutting into the site to create a level plateau, combined with the natural screening provided by the existing trees and shrubs means that only two elevations are highly visible with the other two almost completely obscured.

The speed of delivery required by the client, Swansea NHS Trust, determined that conventional forms of building and procurement would simply not have enabled the Trust to deliver the additional capacity by the required date and therefore only a ‘Volumetric Off-Site Manufacture’ (VOSM) approach to construction would enable the Trust to meet the objective of providing additional surgical capacity in the time frame specified.
The Need to Embrace New Working Methods
One of the key factors in speeding up the procurement of new health facilities is to bring the facility constructor/supplier/manufacturer into the process as early on in the project development as possible. By doing so, the traditional design, tender and construct phases are all overlapped with a consequent saving of time.
A second key factor is the constructor’s access to the ‘supply chain’ which brings both technical expertise and, through repeated use of the same supply chain (leading to longer term, stable, repeat supply contracts), a reduction in price.

A third key factor is the ‘right first time’ or ‘zero defects’ approach, at the heart of which is volumetric off-site manufacturing (VOSM) or modular construction.
The Architects view was that the only approach which would provide the best possible chance of achieving the required date for delivering additional capacity was VOSM. The consultant team therefore worked closely with a leading VOSM provider, to develop designs, costs and programmes from the outset.

Through collaborative working the standard VOSM product was used, but enhanced both technically and aesthetically, to develop a scheme that was client specific and significantly more visually appealing than a standard VOSM build.
The architectural approach has therefore been influenced enormously by the rigours of the volumetric manufacture method.

The concept was to create a contemporary building that responded directly to its location and used many of the features of vernacular buildings set within the landscape to recede rather than contrast or stand out.

Fibre cement horizontal boarding has been used, retaining the dark, slate grey colour but giving a more engineered appearance. The vertical joints between boards are butt tightly whilst the horizontal are overlapped like clap boarding to give a sharp clear line at every horizontal joint. This is an important detail to obscure the simple repetitive vertical geometry determined by the joint line between modules of the VOSM units and is done deliberately to signal that this is not a ‘temporary’ building but is as ‘permanent’ as any other modern healthcare facility.
The direction in which the cladding is fixed is also a response to the VOSM approach. The units (4m high by 3m wide by 12m long) arrive on site and are jointed together at which point the building is watertight. There is no need for a further roof to be added. The relatively long low profile of the 15-unit long building has been emphasised through the horizontal emphasis achieved in the cladding.

A site-specific external appearance referencing traditional materials and methods of cladding but executed in a way which achieves a more contemporary and consistent appearance has been achieved. The dark grey mass of the Unit is set on a light grey concrete block plinth, raised above the ground separating the contemporary, engineered and man-made from the natural ground.
The dark colour chosen for the cladding reflects the grey of slate and is fundamental to the idea of the building receding into the strong surrounding band of trees and shrubs much as black agricultural buildings and dark grey rendered or stone and slate roofed buildings do.

The only break in the long low form is the courtyard cut into the south side of the building which creates further opportunities for gaining natural light and heat, views to key patient and carer/visitor areas and provides a planted space immediately outside the main entrance and waiting area. The courtyard also acts to physically separate the internal public spaces from the more private recovery areas.

The addition of five VOSM units forming the plant room at first floor level to the north of the courtyard provides a vertical axis to anchor the building by its massing emphasises the location of the main entrance. The engineering plant has been split to be part on the roof – within this plantroom and part on the ground in a service area in the northwest corner. This enables us to balance the massing, avoiding a large roof top plant room whilst maintaining the appearance of a long low single storey building whilst keep the building away from the trees on the east (Sketty Lane side of the site) by having a small ground level services area.
The service area is screened from the car park by rendered walls and a timber slatted, steel framed gate and from rooms along the west of the building through the use of low rendered blockwork walls and tree planting to create a small semi enclosed court.

With little surface modulation to the east and west elevations, pre pattinated copper cladding is used as an infill layer at window level to create a band effect within which the smaller or horizontal windows sit. They also serve to direct the view to the main south elevation.

The main entrance is signalled by the massing of the plantroom, the courtyard and large areas of glazing looking on to it and by the raised timber slatted canopy. The entrance is reached by steps or ramp and the timber of the canopy is repeated in the planter around which the ramp wraps.
Sustainability Credentials
The VOSM method of construction has an inherently lower embodied energy level than traditional construction techniques by reducing waste through controlled construction within a factory environment. In addition, many components are recyclable once the building has reached the end of its 60 year design life. The use of natural light and ventilation has been maximised which brings benefits through relatively low energy consumption as well as improving the interior environment for both patients and staff.
Designers Evaluation
The VOSM approach greatly improved the timescale between project inception to completion. The whole building was transported to site, erected and made watertight in 5 days, and the period from inception to the first patient operation was 12 months.

Considering the building type and sector, this was a considerably quick programme and demonstrates what can be achieved when client/consultants and supplier/contractor work together from the offset and share knowledge in an open fashion.

The scheme is an award-winning project which demonstrates the opportunities of modern methods of construction, in particular VOSM construction, one of a very few built in Wales and for the public sector. The approach to the envelope, unlike other built schemes, demonstrates an innovative approach, utilising a dry-fix factory prepared material, which enables a quick build programme. The use of the cladding also disguises the repetitive nature of the module units, and gives the building a real sense of being a permanent, solid building, which indeed it is designed to be.
The design of the building has led to a significant increase in efficiency, enabling the Trust to perform more operations than was previously possible, due to the design led nature of the clinical layout.

The Trust has stated:

‘The Day Surgery development at Singleton Hospital has enabled the Trust to make major improvements in the delivery of day case surgical care as well as pre + post operative assessment. In focusing this activity in a purpose built, user friendly facility, we have found patient experience to be positively enhanced in terms of accessibility, efficiency and quality. The relatively short project duration meant that the Trust was able to respond to pressures such as waiting list targets in a proactive manner.'

The scheme was awarded a commendation award at the City of Swansea Lord Mayor's Design Awards ceremony in 2006.