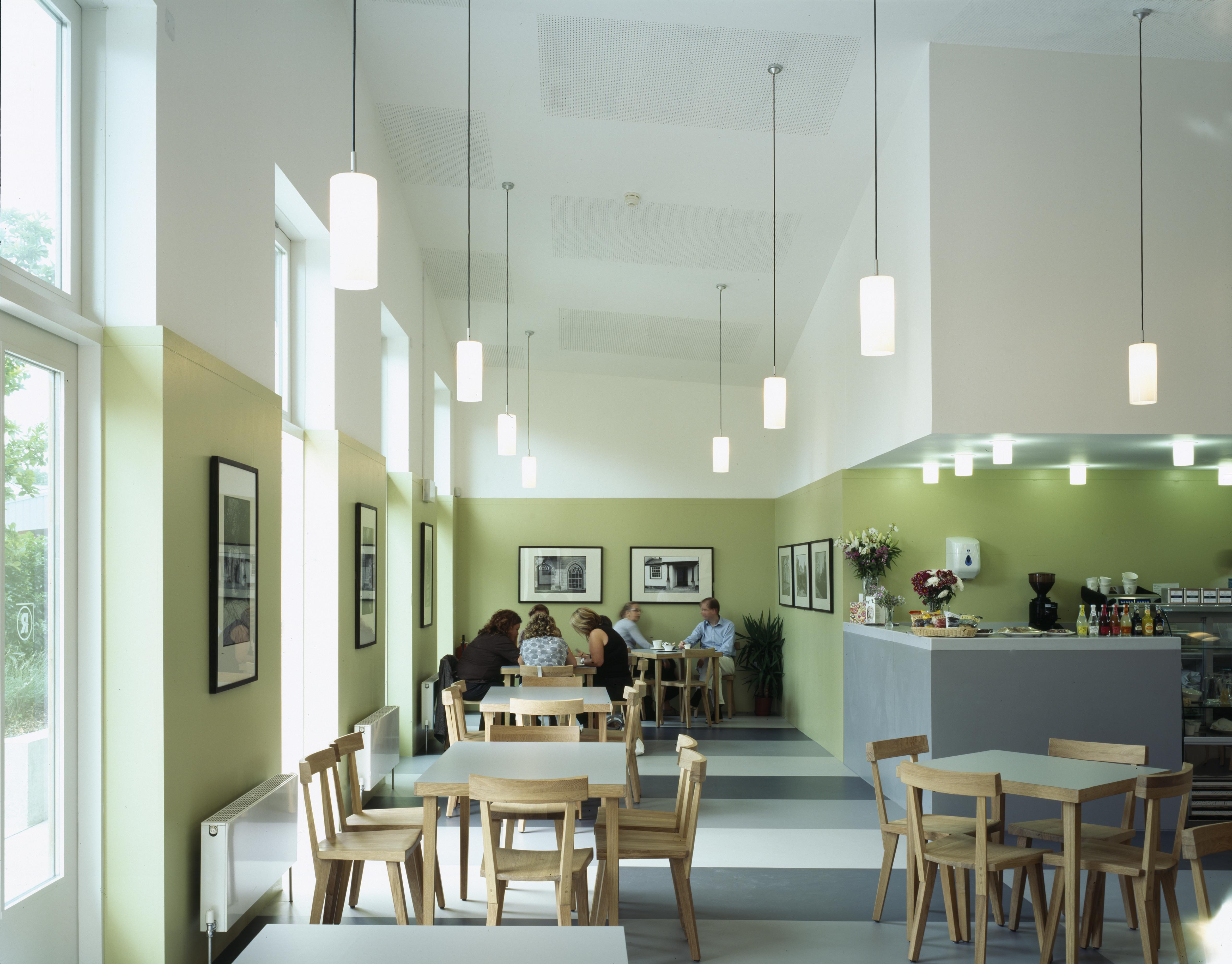 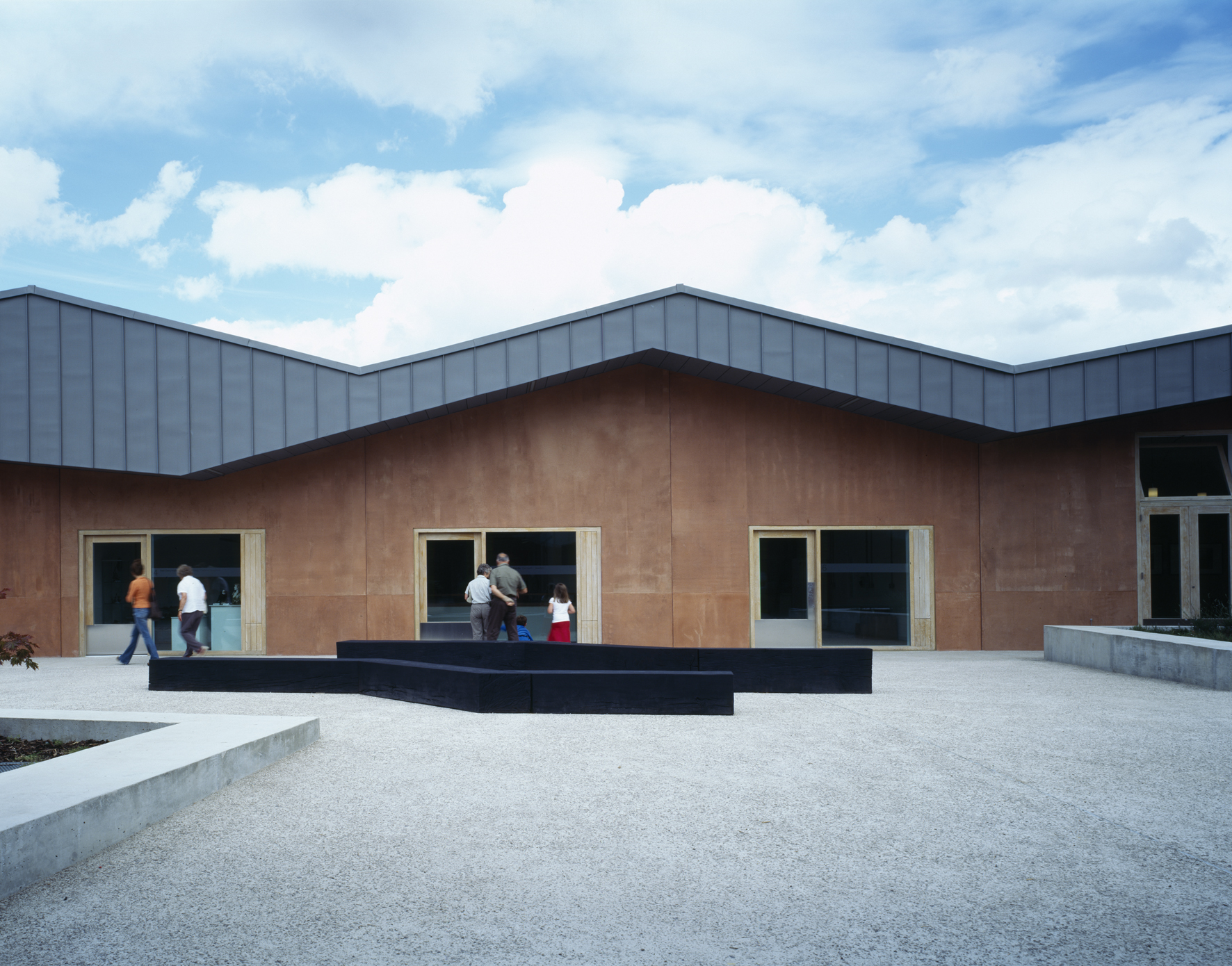 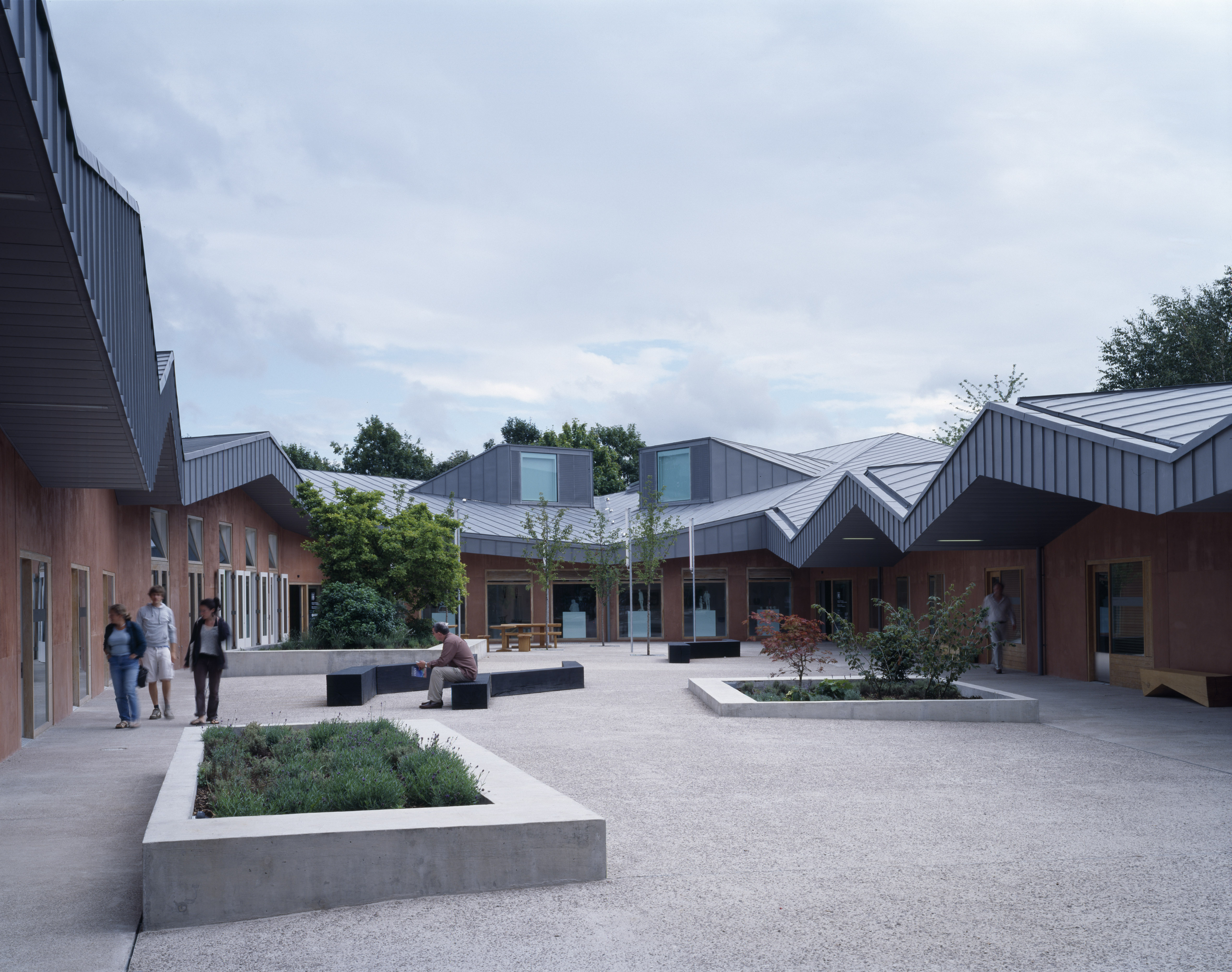 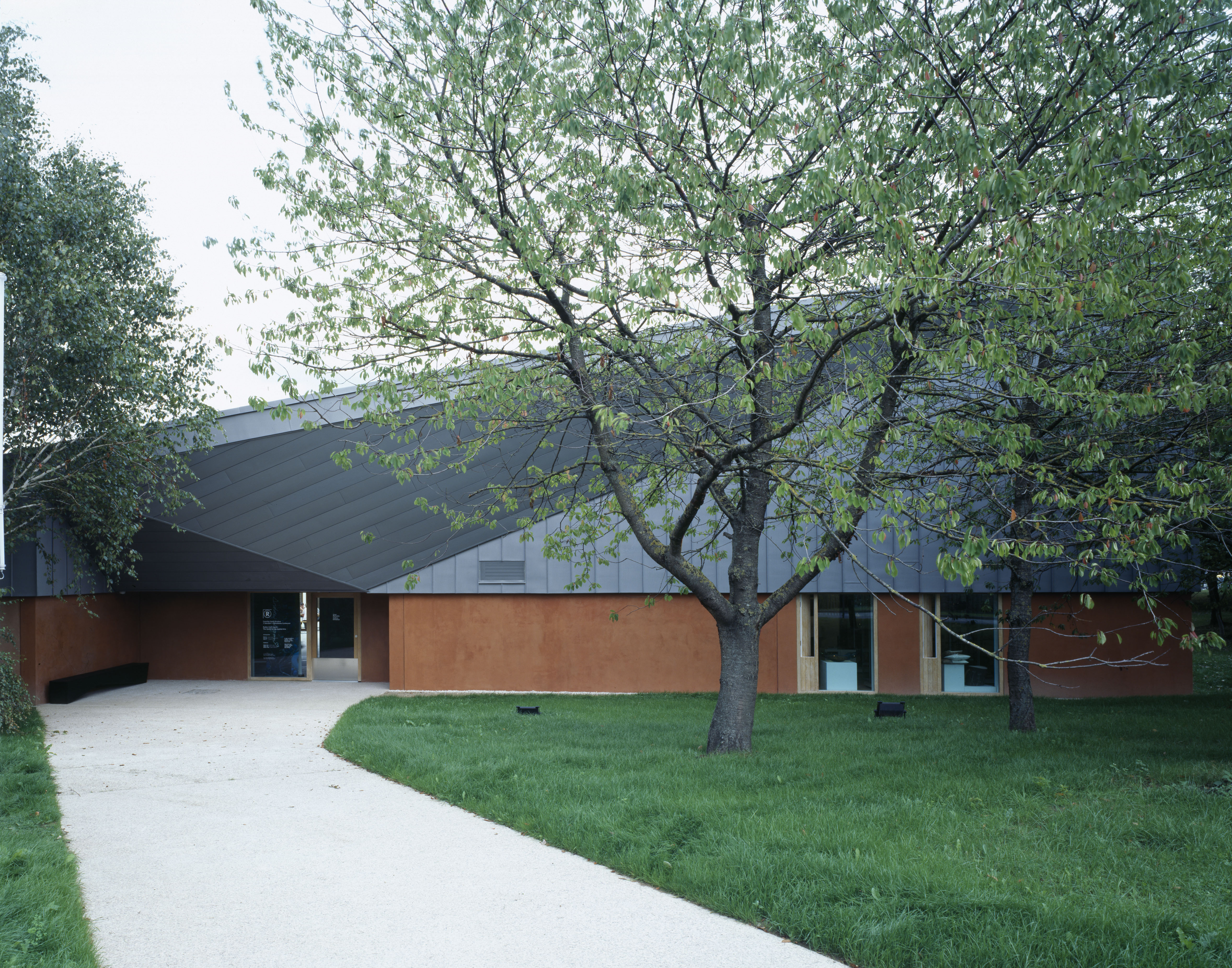 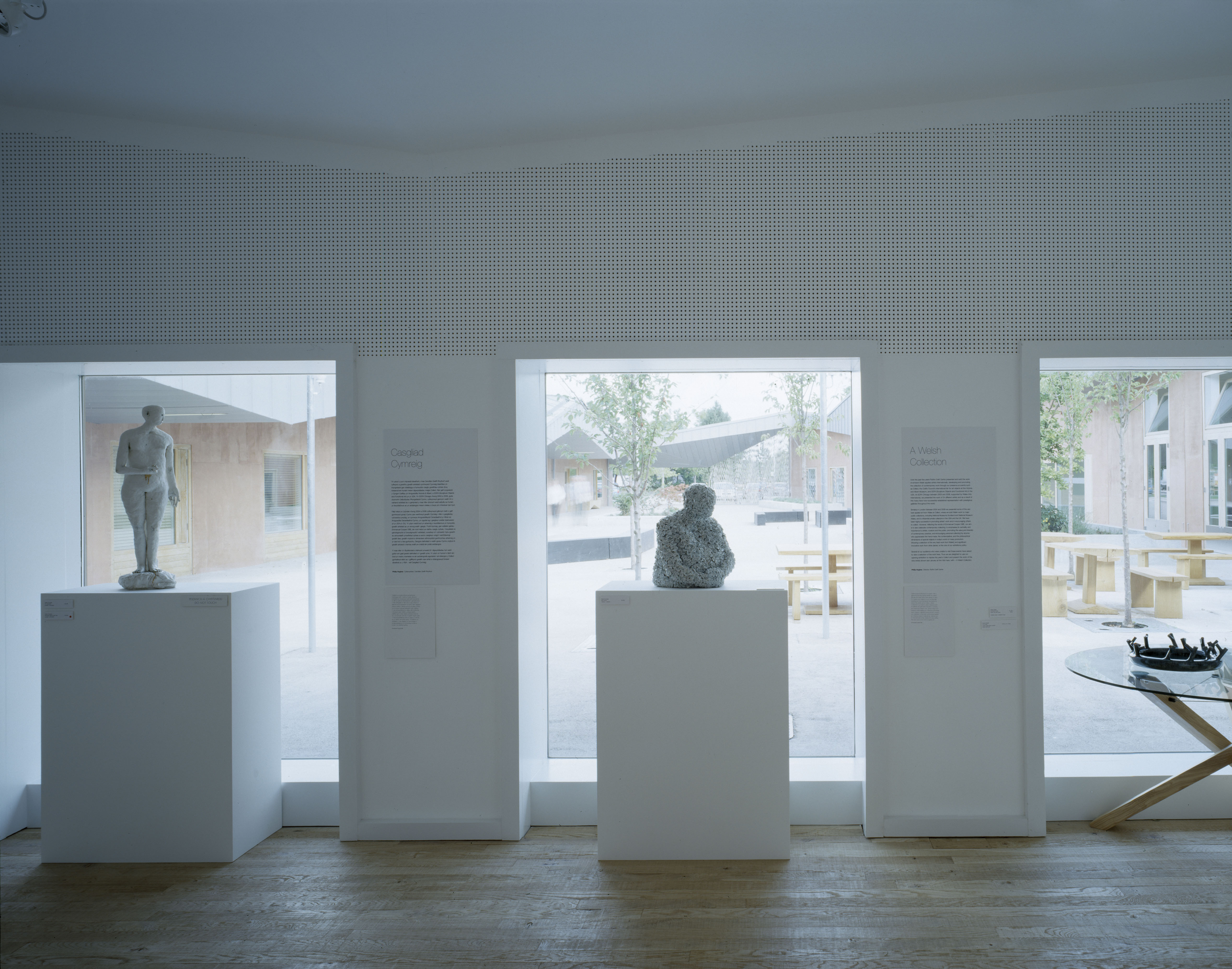 The design concept aimed to enhance the essential characteristics of the former building, its courtyard typology and its relationship with the surrounding landscape. The courtyard is the principal communal space, creating a protected environment and an important transitional space between the interior and the surrounding town. The restaurant, education room, workshops, studios and entrance hall open directly into this landscaped space with external seating and covered areas.

The external form of the building is a complex composition of sloping rooves, which shift in plan and section and are quietly reminiscent of the Clwydian range seen above the site. Zinc panels of varying width are detailed as a wrapping over roof and wall, with alternating seam arrangement creating a weave pattern. The cast concrete walls are pigmented to give a clay-red hue which establishes a visual link with the local red sandstone found nearby on buildings such as Ruthin Castle. The walls were cast on the ground and then tilted up into place. A combination of surface pattern provides texture and emphasis to the walls.

There are three gallery spaces, arranged so as to allow a variety of routes and sequence of spaces depending on the requirements of changing exhibitions. The shop is located adjacent to the principal entrance, with large windows making it visible from the outside. The restaurant is located on the northern side of the courtyard with a south-facing terrace. A high level window on the north-eastern side provides a long distance view of the Clwydian range behind. Adjacent to the restaurant, six workshop studios are arranged in a row with service entrances on the north side and ‘shop-front’ entrances on the courtyard side. The education room, two studios for artists in residence, the Tourist Information Centre and the administration areas are located on the southern side with entry and views into the courtyard. In this way, the different functions of the Centre have a close physical relationship with the daily activities visible, adding life and activity, but retaining a degree of autonomy.

The building has been planned to allow as many spaces as possible to be provided with fresh air ventilation using opening windows and rooflights. Openings on opposing sides of spaces allow crossflow ventilation even in the larger, deep plan rooms. The large gallery space is also ventilated in this way, avoiding the need for energy using mechanical fans, made possible by the approach to the display of precious objects is based on the use of controlled display cases rather than air conditioning the entire gallery volume.

The walls and floor of the building have deliberately been chosen to be of heavyweight construction including materials such as concrete and heavyweight plaster finishes, rather than a lightweight construction. These materials are exposed on the inside of the rooms which allows them to absorb and release heat/energy during a typical day. The gallery rooflight design allows them to be left open during the night in the warmer summer months, whilst maintaining security and weather tightness, to allow the cooler night air to purge the building of heat which builds up during the day. The heavy structure can store cool air, helping to reduce temperatures inside the galleries the next day without resorting to air conditioning.

The amounts of glazing in the external walls are modest so as to reduce winter heat loss and summer heat gain. Rooflights are used extensively to make sure that internal daylight levels are good, allowing less reliance on electric lighting during hours of daylight. Insulation levels in the external walls, roof and floor slab are generous, further reducing the base year round energy needs.

The spaces to the north and south of the courtyard deliberately have larger (taller) elevations on their southern side and smaller (lower) northern elevations to take maximum benefit from useful winter sun to reduce heating energy needs. Any available solar energy is stored in the thermally massive building structure. Roof overhangs on the southern sides of these spaces are small to improve solar access. The gallery spaces which are generally more densely occupied and have heat generating display lighting have a lesser need for solar energy and so do not have any windows on their southern side and use north facing rooflights.