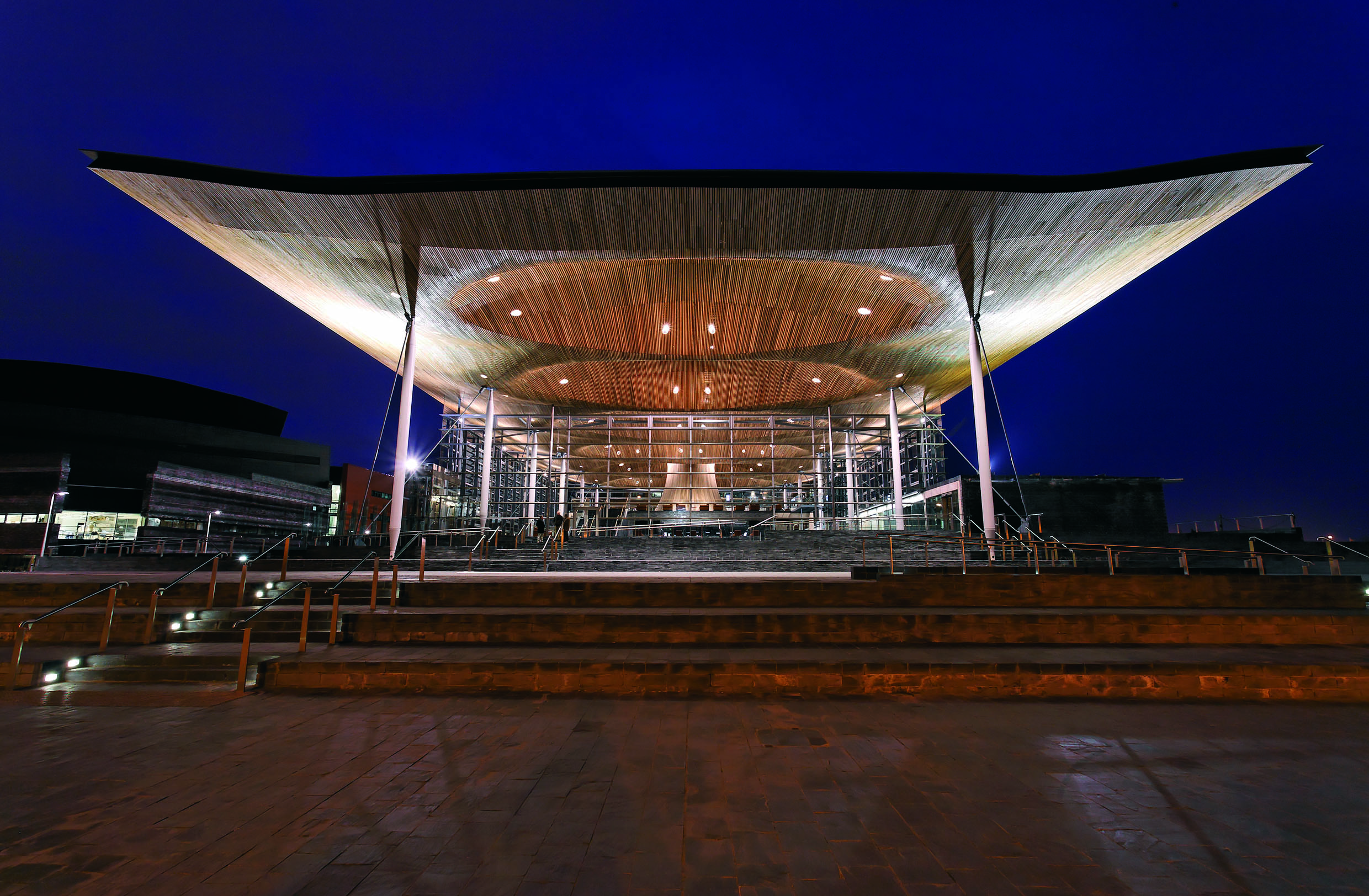 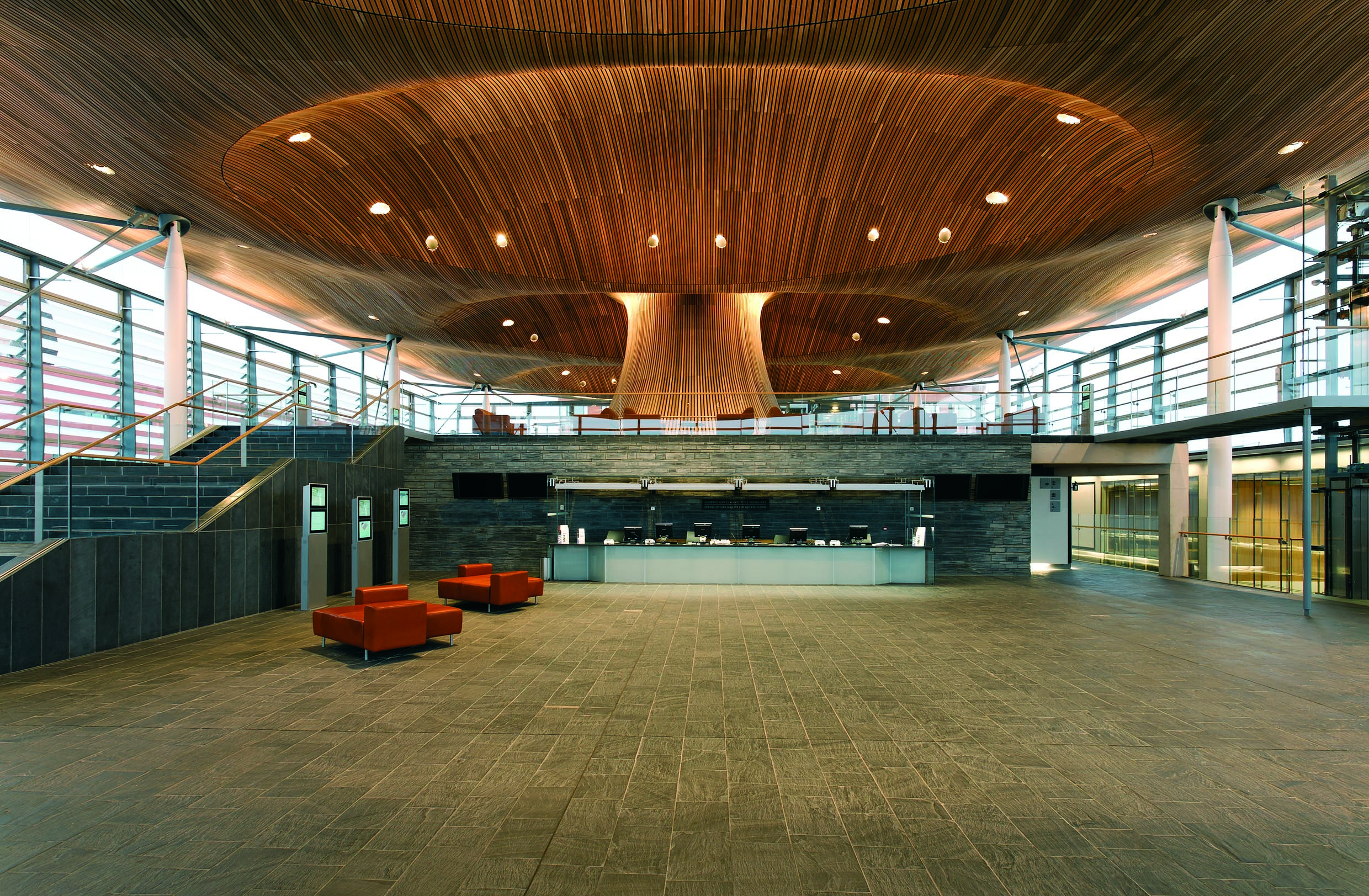 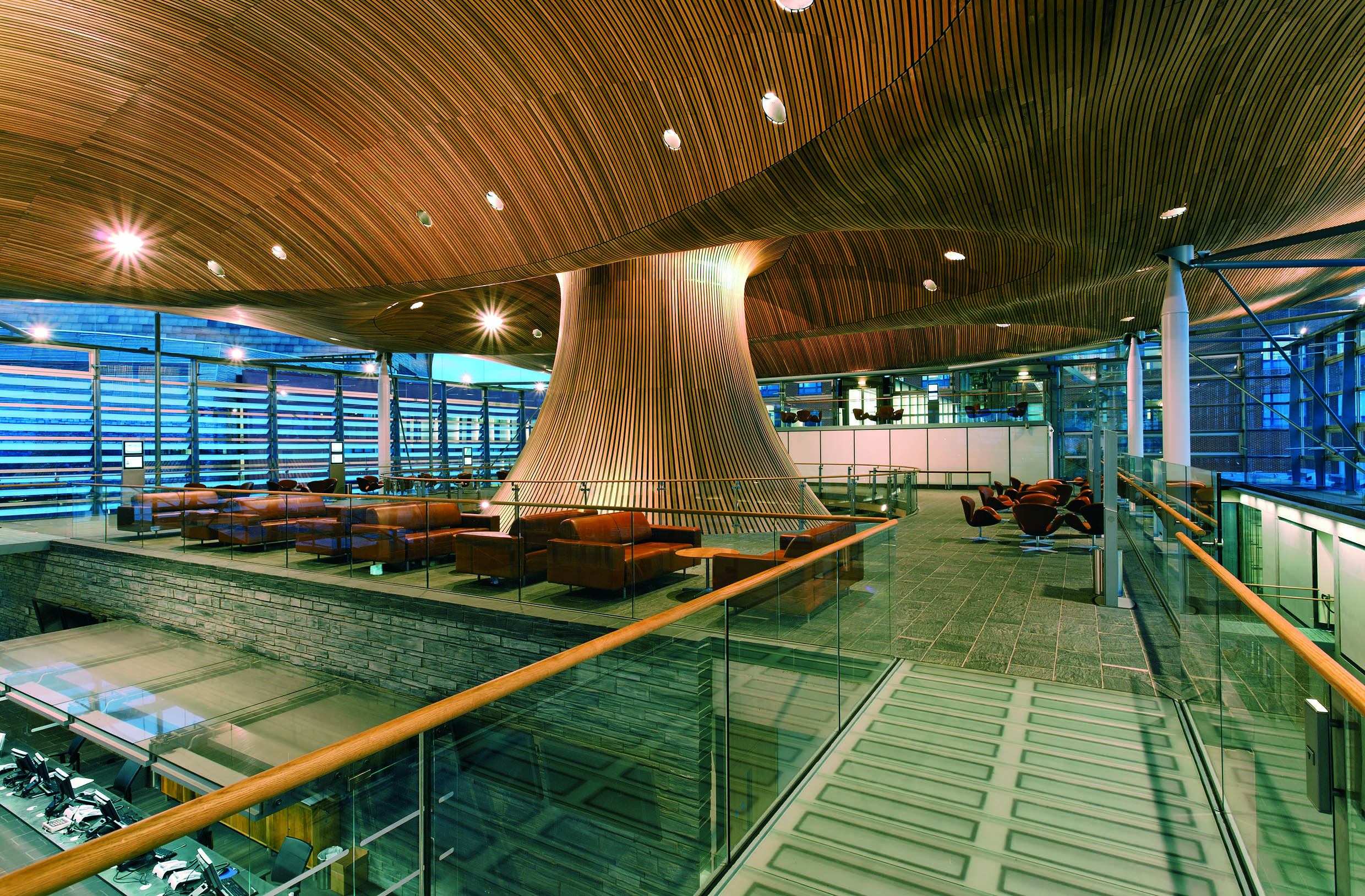 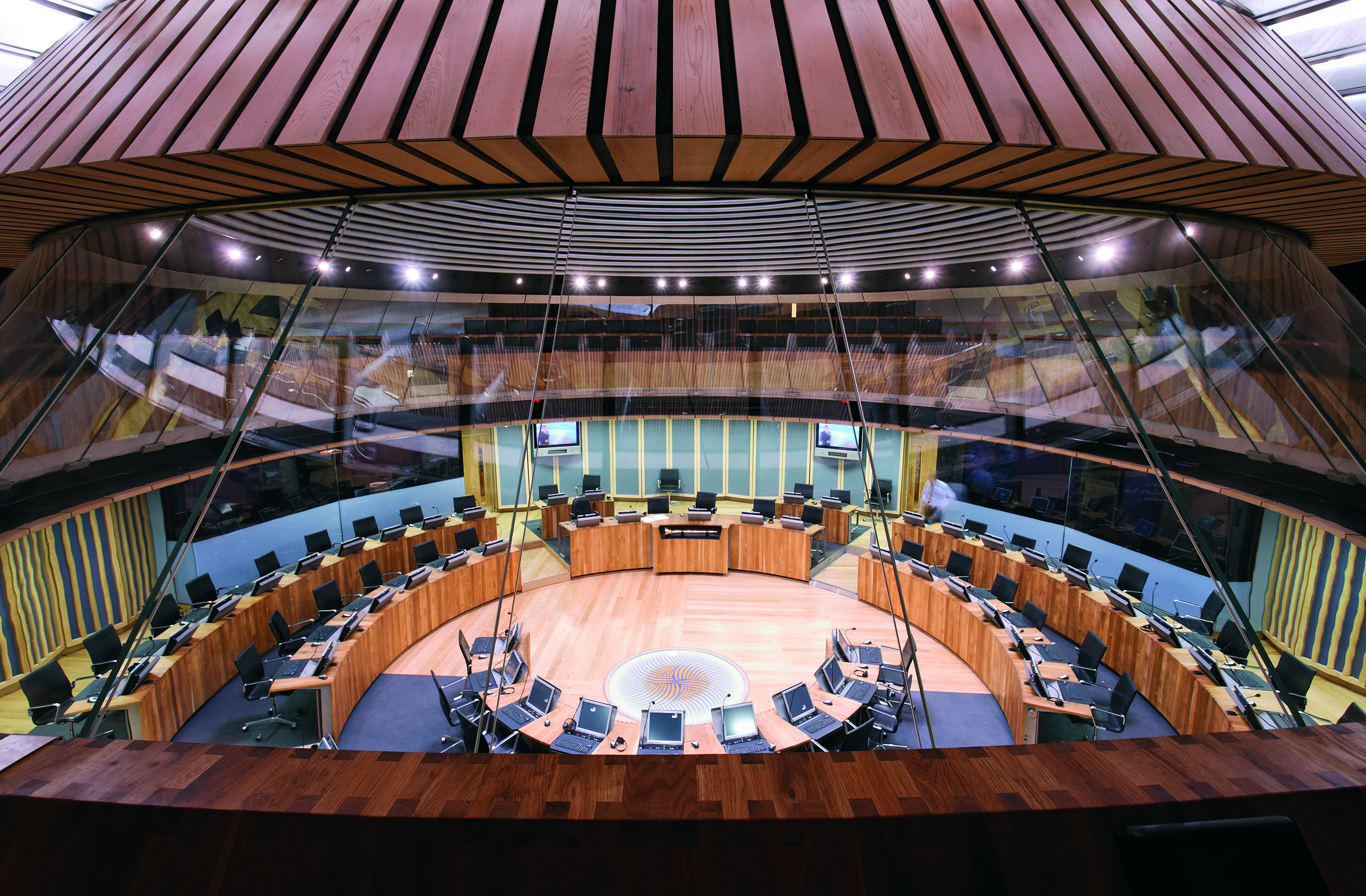 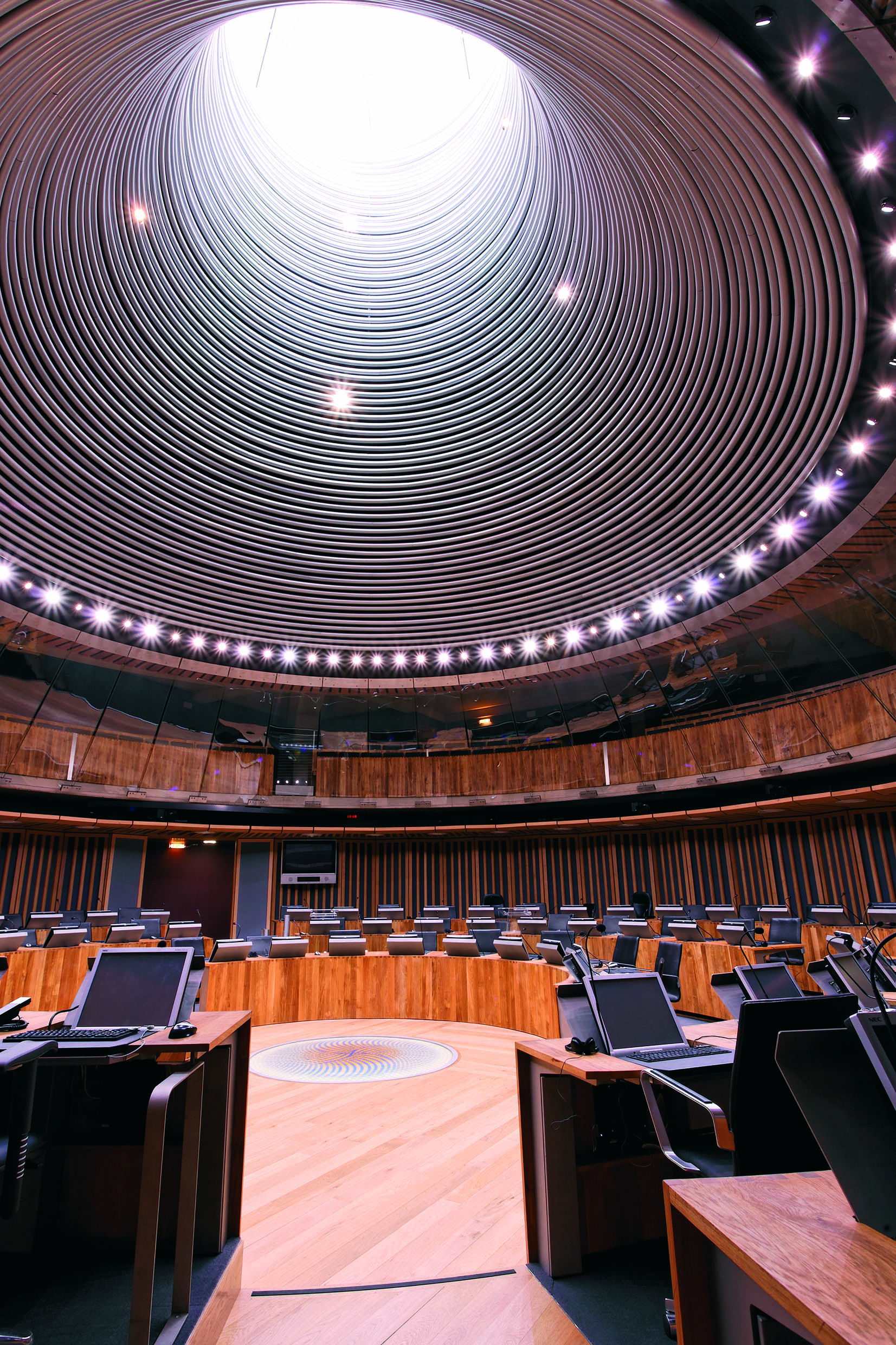 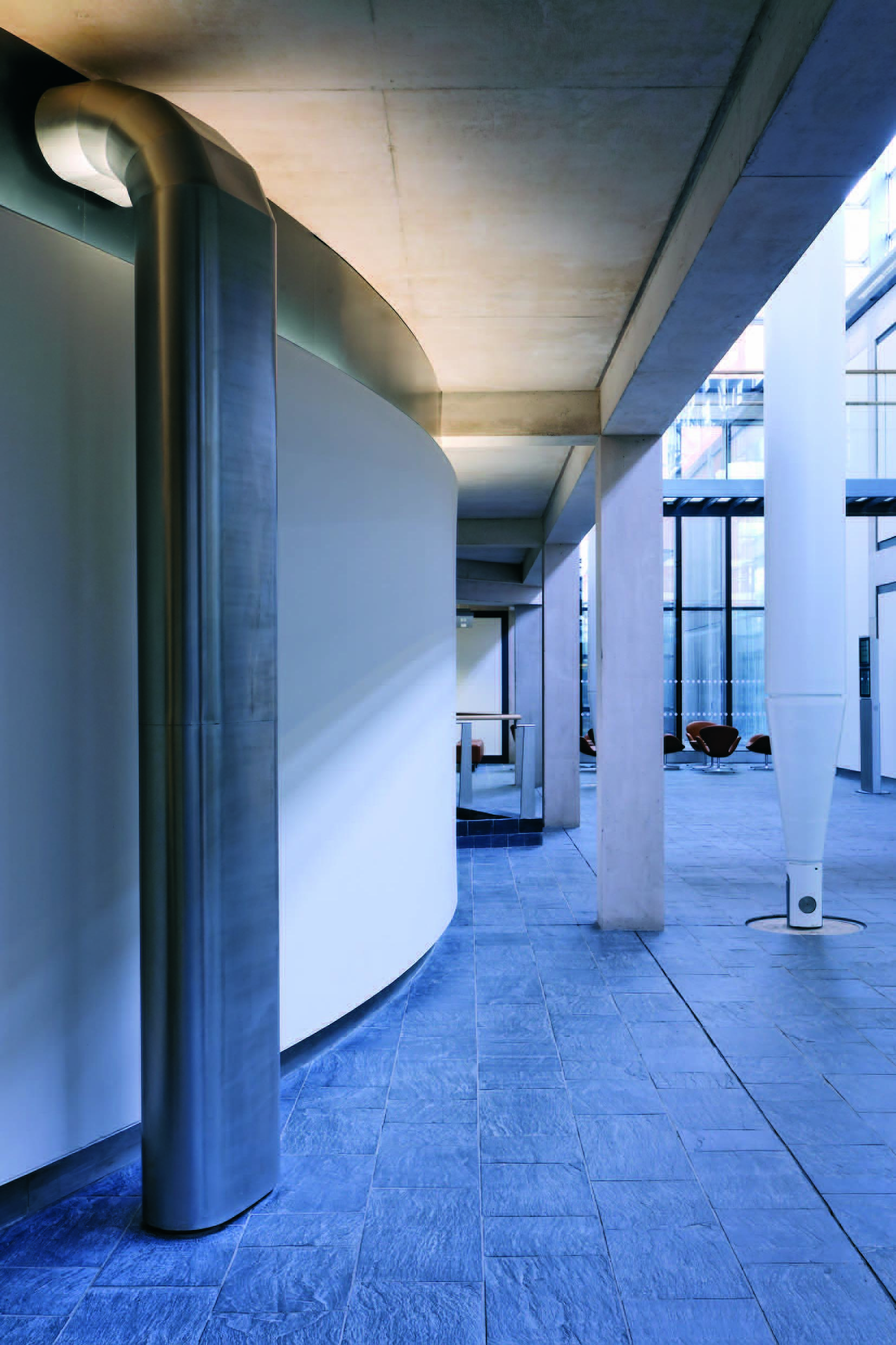 Richard Rogers Partnership employed the idea of openness and transparency as the driving factors in the design for the National Assembly for Wales. Instead of being an insular, closed edifice, the building would be a transparent envelope, looking outwards to Cardiff Bay and beyond; making visible the inner workings of the Assembly and encouraging public participation in the democratic process.

The idea of openness is exemplified by the organization of the building, with public spaces elevated on a slate clad plinth stepping up from the water and cut away to allow daylight to penetrate the administrative spaces below, therefore enabling a visual connection between the electorate and elected. A lightweight, gently undulating roof shelters both internal and external spaces, extending downwards to encapsulate the chamber. The roof is pierced by the wind coil that rises above the debating chamber at the centre of the building.

The Main Hall and the Debating Chamber form the internal, spatial representation of the electorate and the elected respectively and have been of key focus during the design process. The Main Hall is arranged on two levels with the lower entrance level housing the public reception and information facilities. To one side of the large slate and glass reception desk, a flight of stairs leads to the upper level, which accommodates a café and exhibition area with a glass floor allowing glimpses down into the Debating Chamber and impressive views in all directions.

Heart of the building

The Debating Chamber, a large circular space at the heart of the building, is crowned by a dramatic bell form expressed in the roof plane. The interior of the bell is finished in concentric, satin-finished aluminium rings. Surmounting these, a glazed lantern allows diffused daylight into the chamber. The lower portion of the bell is glazed, offering views into the chamber from the public viewing gallery above.

The exterior areas around the National Assembly form a cohesive new open public space that sits between well established areas of differing character and quality. Hard landscape extends from the plinth to the adjoining buildings completing the development in this part of Cardiff Bay. Low slate terrace walls define a series of terraces falling away from the front of the building and onto the existing harbour wall.

The National Assembly for Wales exemplifies high environmental standards and has been awarded a BREEAM rating of Excellent.

Virtually all areas of the building are naturally ventilated. A conical mirror suspended under the wind cowl has been installed to reflect daylight from low altitude winter sun in the chamber. Roof lights and customized roof ventilators serving the committee rooms/offices reflect low-level winter daylight into the space, assisting daylight penetration

A biomass boiler – processing both wood chips and pellets – provides high grade heating to heat emitters. Water usage is minimised through the application of appropriate fixtures and fittings and the utilization of rainwater harvesting to minimise the consumption of potable mains water. The ground source heat pump system provides cooling for mixed mode spaces and technical computer suites and low grade heat, which is required for the under floor heating system.