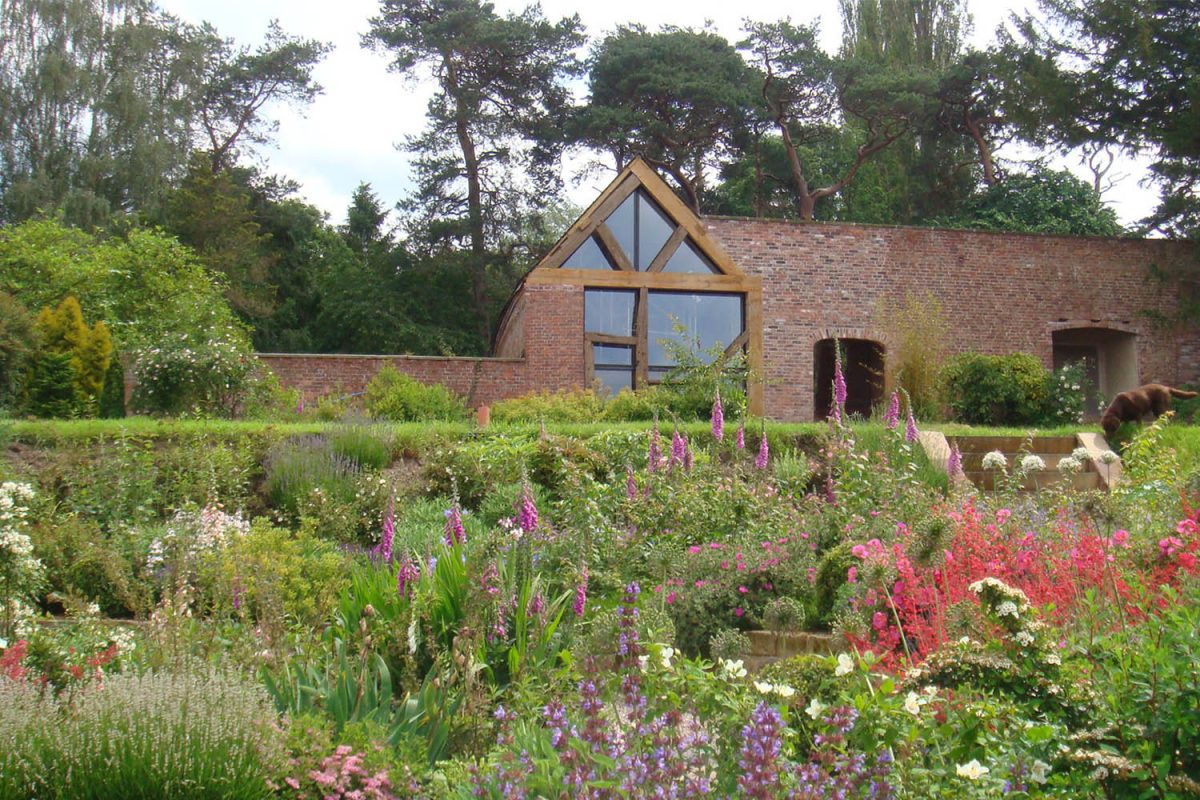 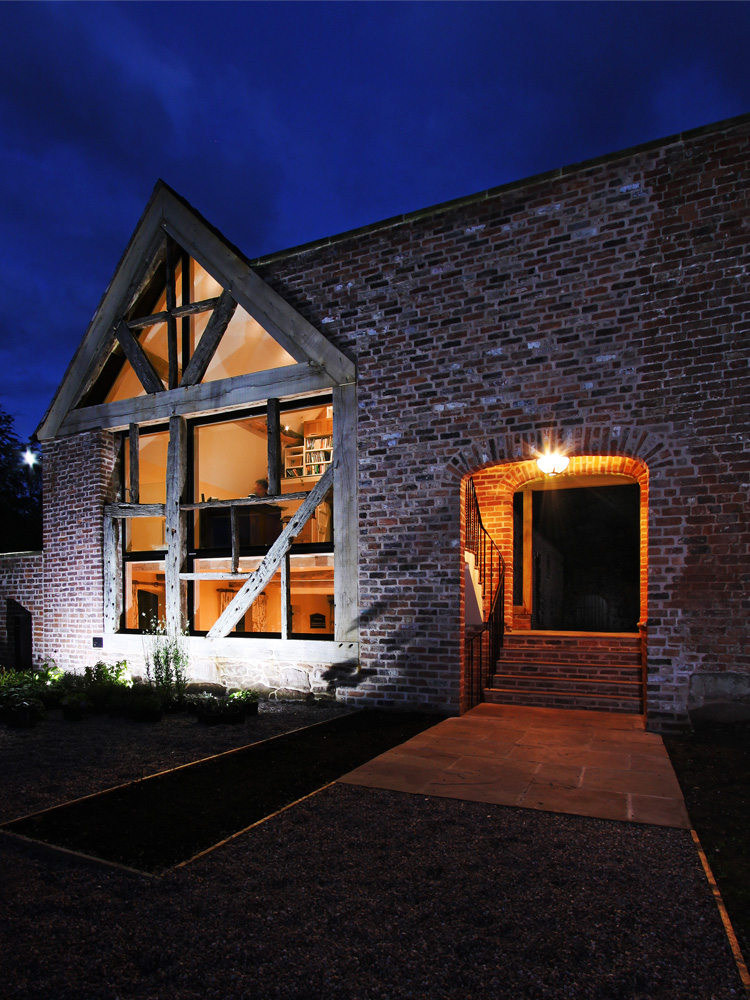 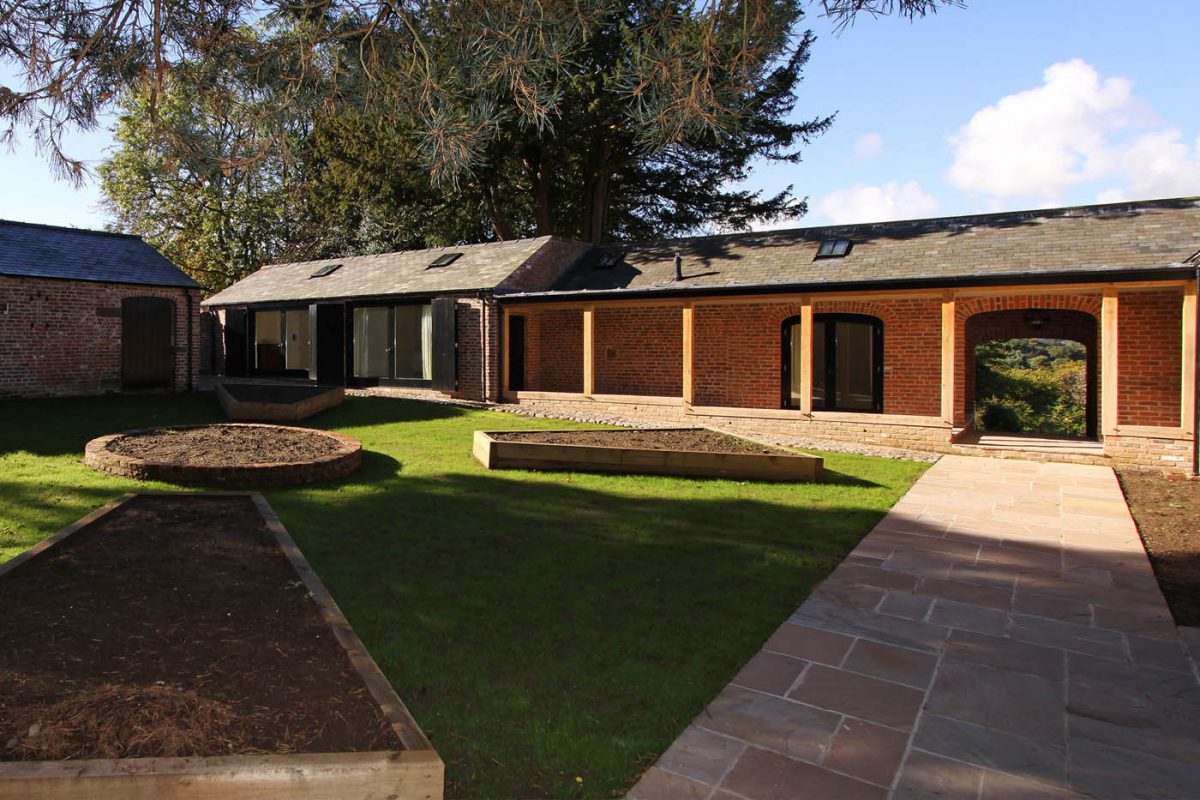 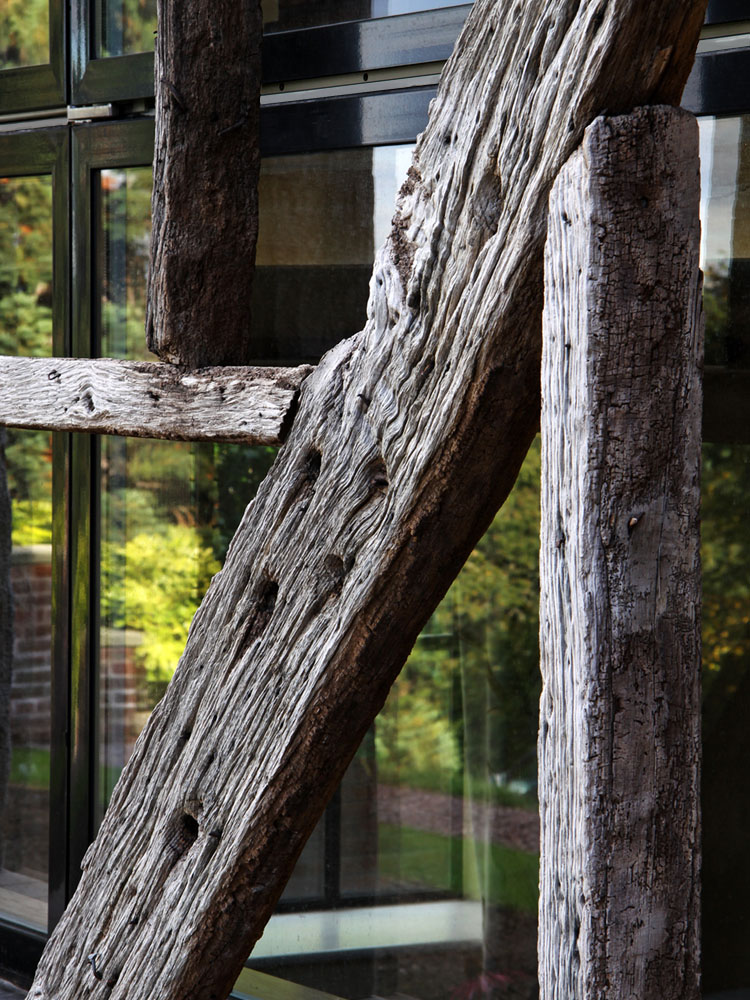 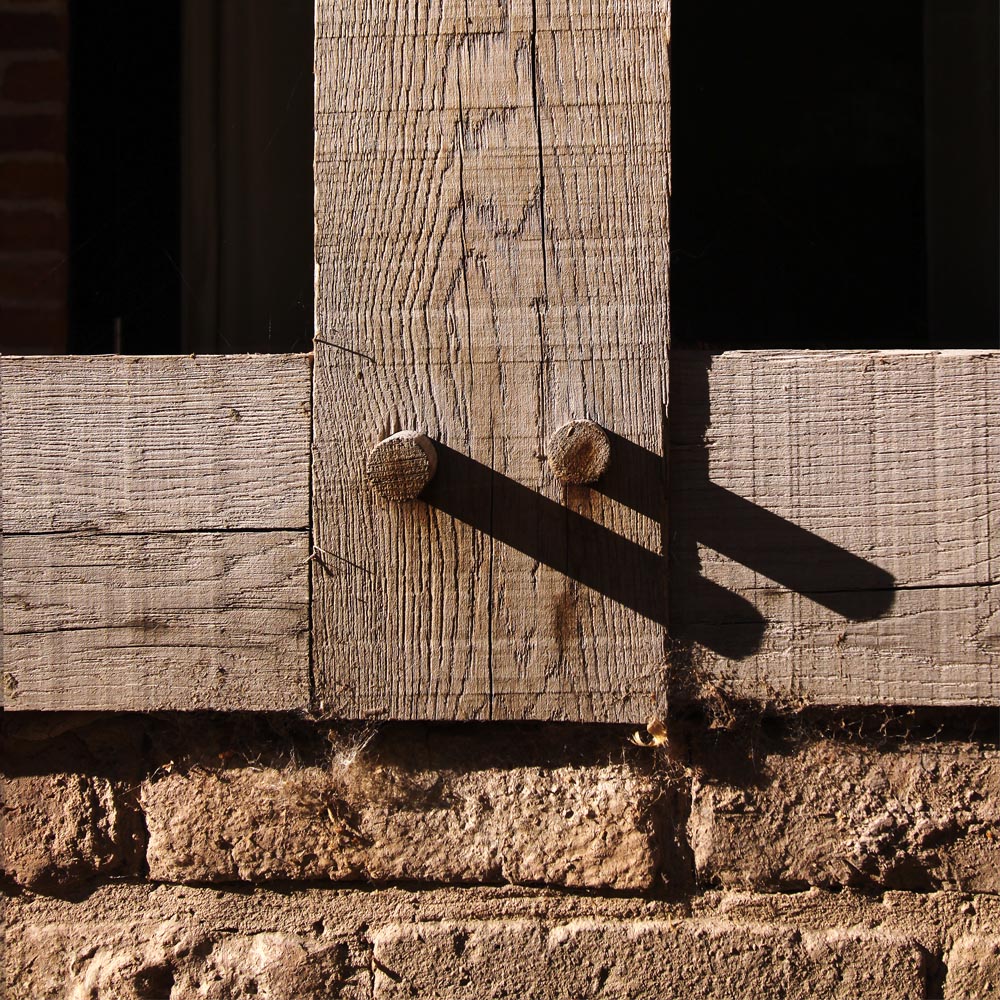 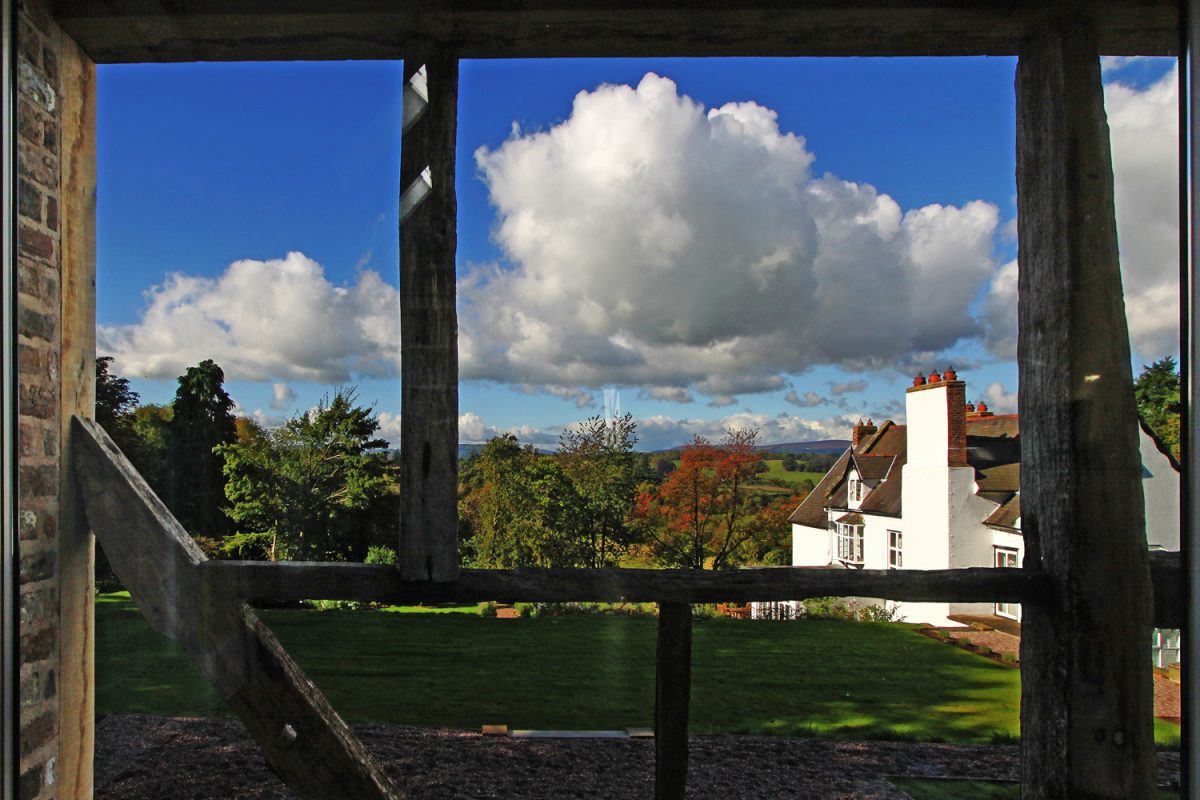 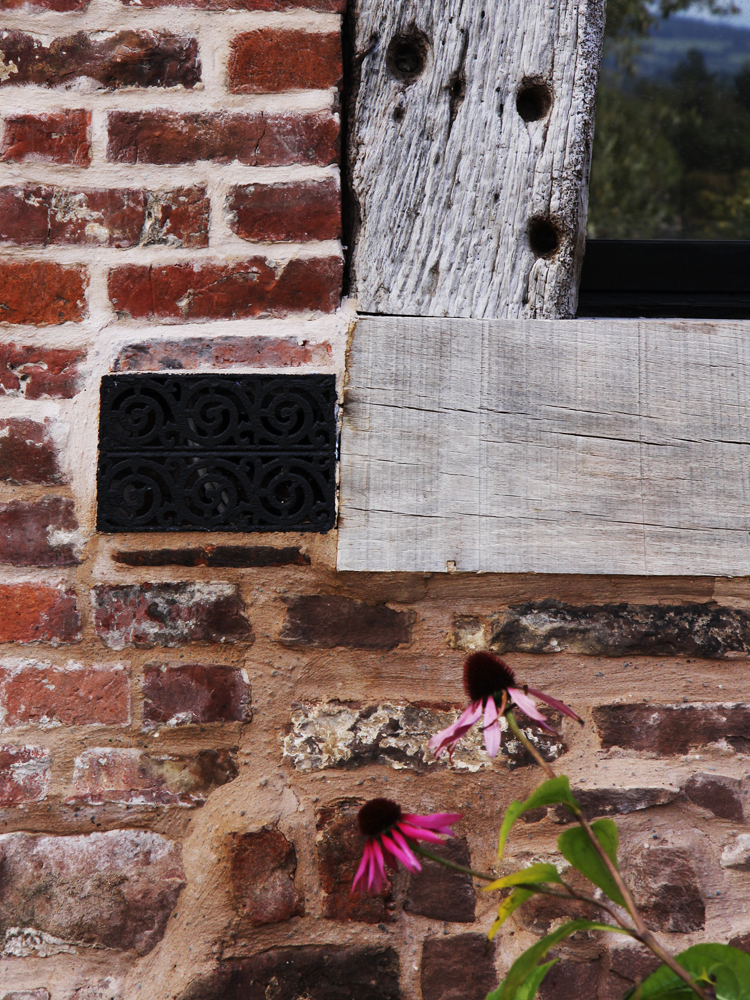 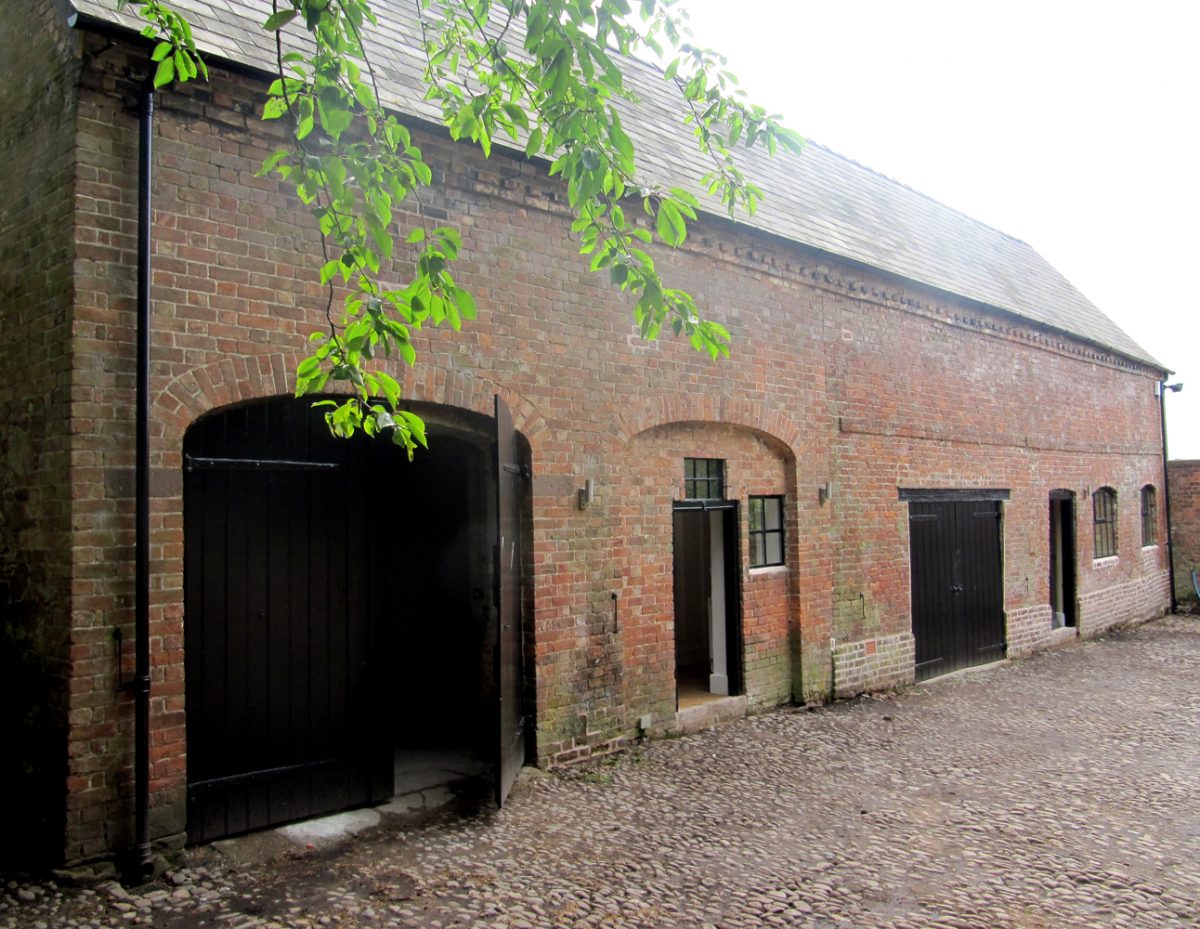 From the start it was the client's intention to renovate the buildings in order to prevent further dilapidation. It was proposed that they would be used as ancillary accommodation to the main hall, including leisure rooms as well as a home office and guest bedrooms. It was accepted by the local Planning Authority that bringing the buildings back into gainful residential use was the only viable way to secure their future.

A major concern was the access to and circulation through the buildings. Access from the coach house to the other buildings was poor and there was no convenient access from the main house to either of the courtyards or buildings.  To resolve this issue, a new archway was introduced to the stable building to allow for a direct route from the main house and 2 stairs were added to link the different levels of the buildings. A new covered walkway creates a contemporary addition to the ensemble and a protected connection between the bedrooms in the stable wing and the coach house.

The implemented design respects the existing arrangement and fabric of the buildings and only intervenes where required to make them suitable for their new use. The interventions are designed to be in keeping with the simple and functional architectural language of the ensemble. The new walkway is constructed from solid oak on a brick plinth and the roof is clad in lead - traditional materials that are sympathetic to the existing.

Special consideration was given to the preservation of the original timber framed western gable of the coach house. It is believed that this part of the building is one of the oldest in the ensemble. The design, which introduces a contemporary glazed screen behind the original timber frame, keeps it outside the insulated building envelope which, not only preserves it but, turns it into the central feature of the ensemble. It affords the home office extensive natural lighting and stunning views over the garden, the valley and the distant Welsh hills. The weathered and aged original timber framing sits in sharp contrast with the precision of the aluminium and glass façade behind it.

Overall, the works have transformed the ensemble of dilapidated buildings into contemporary accommodation that will secure their existence, use and value in the future.

Due to the advanced degree of dilapidation to the internal fabric and finishes throughout, the local Authority Conservation Officer accepted the architects proposals to install insulation to the inside face of all walls, as well as to the roof and floors. This has allowed significantly higher levels of insulation to be achieved than would normally the case in a listed building.

The works also include the replacement of all windows with new double glazed steel framed windows. A new efficient oil boiler is supported by a wood burner on the lower level of the coach house. A ground mounted array of solar photovoltaic panels was installed in a location remote from the buildings in order to avoid impact on the ensemble itself while providing an additional sustainable source of energy.

"We employed Randal Turner of Andy Foster Architects to design and oversee the conversion of an 18th century Grade II listed barn.  His design was modern and imaginative whilst at the same time maintaining the integrity of the old building.  He dealt admirably with both the planning and conservation departments of the local council.  He was also appointed to oversee the building works, and in this respect Randal was meticulous in his attention to detail and conscientious.  He was a pleasure to work with, both for us as clients but also for the contractor.  We would highly recommend him to anyone considering undertaking this type of project." The Clients