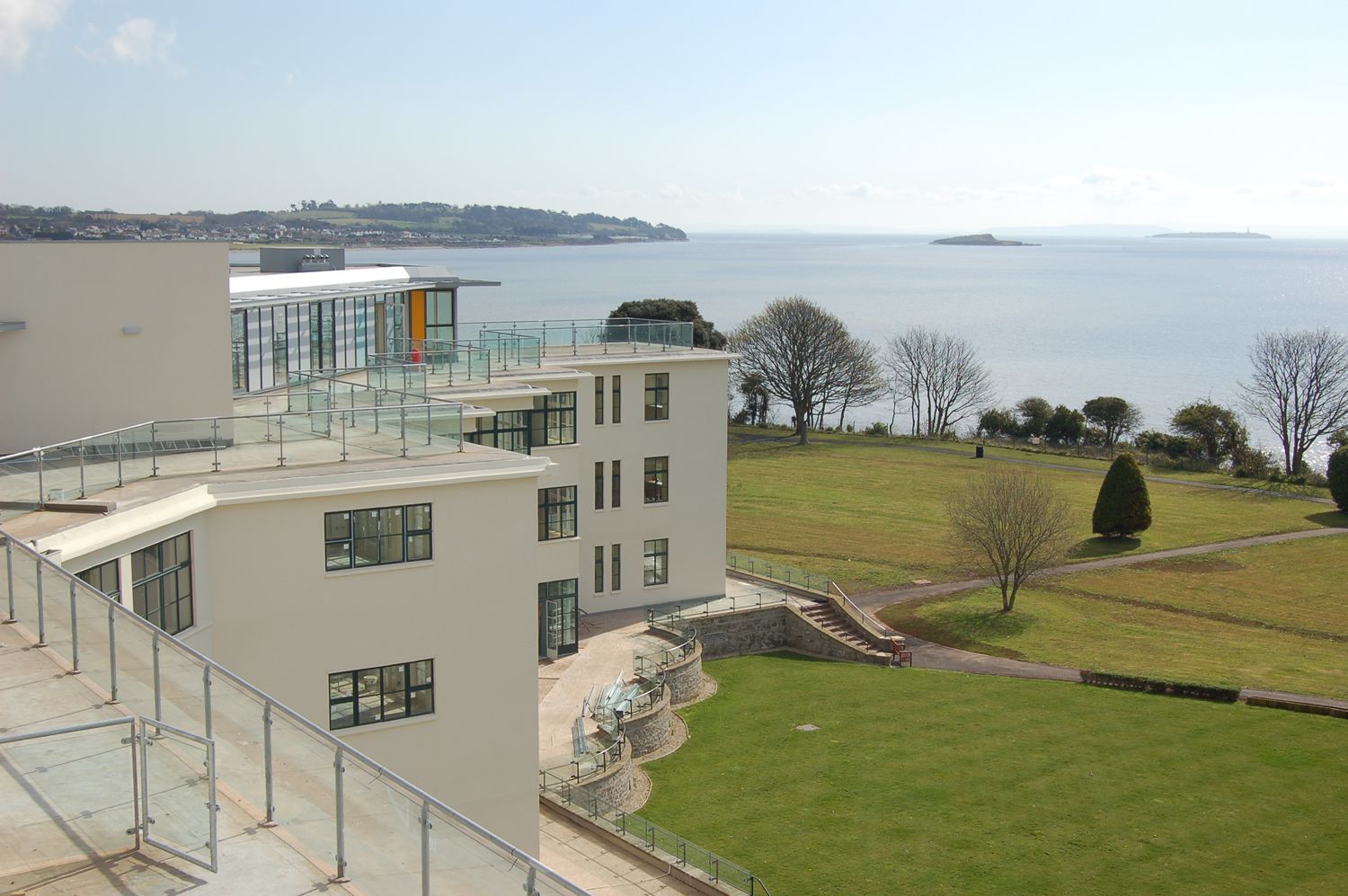 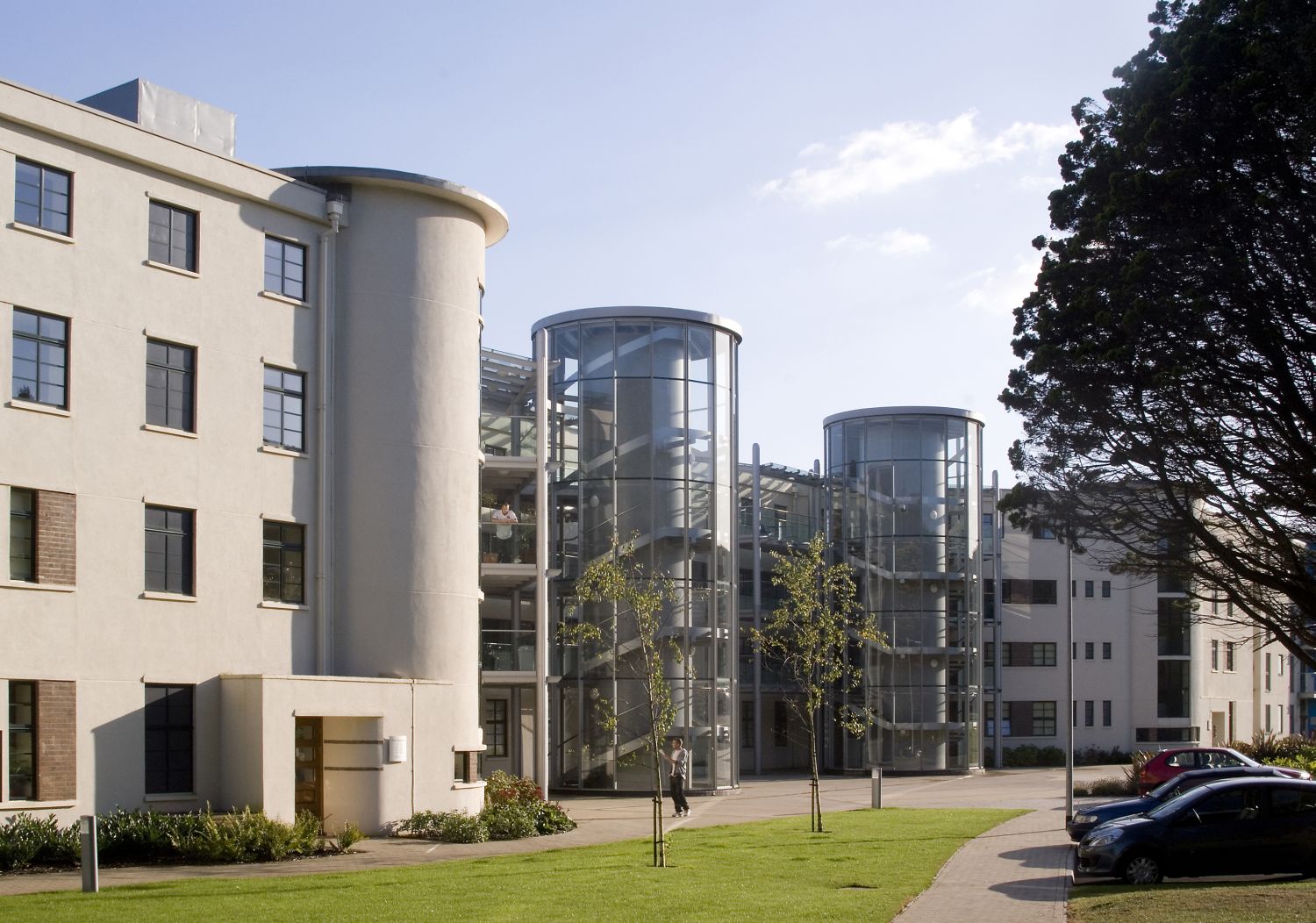 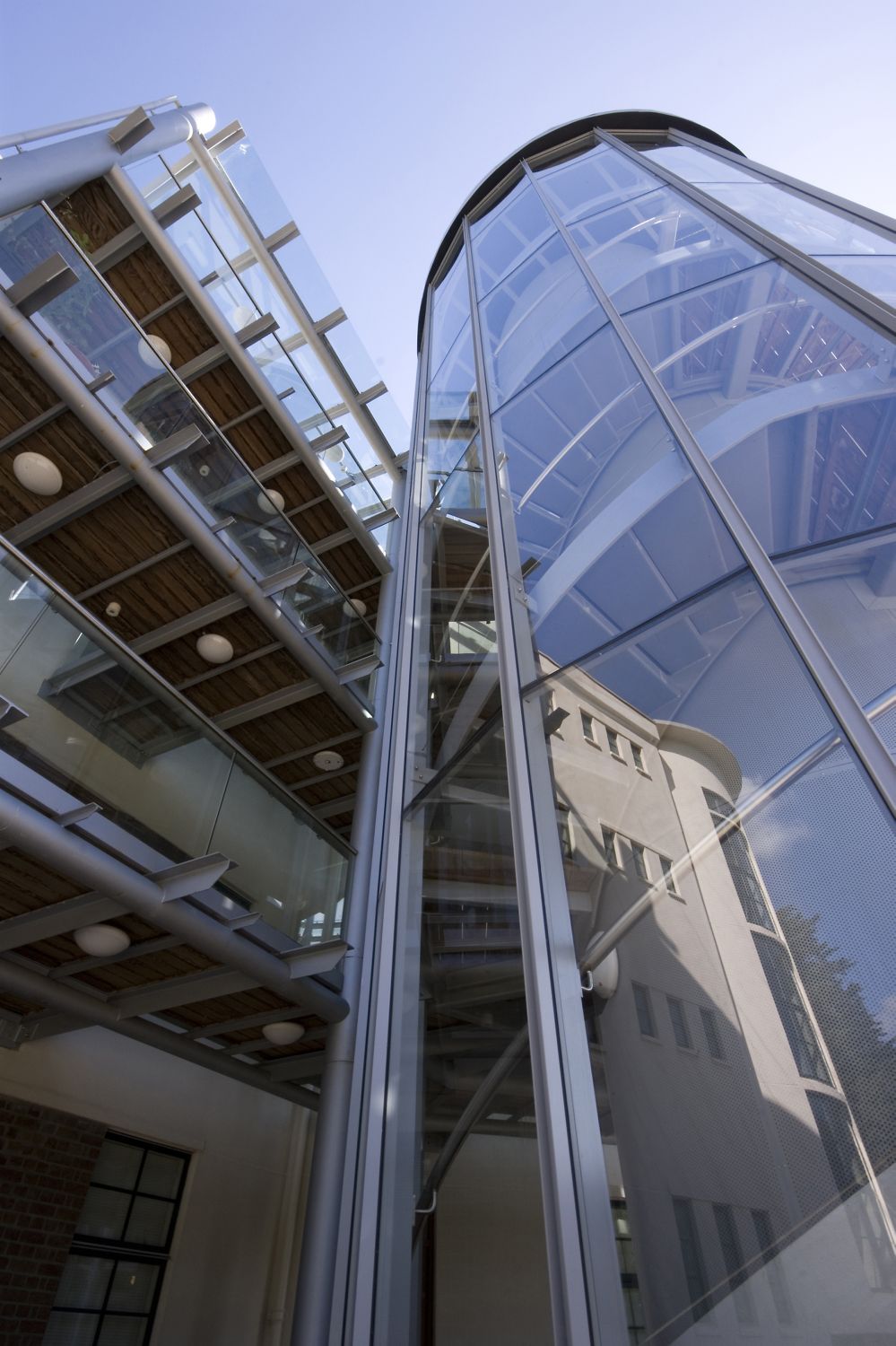 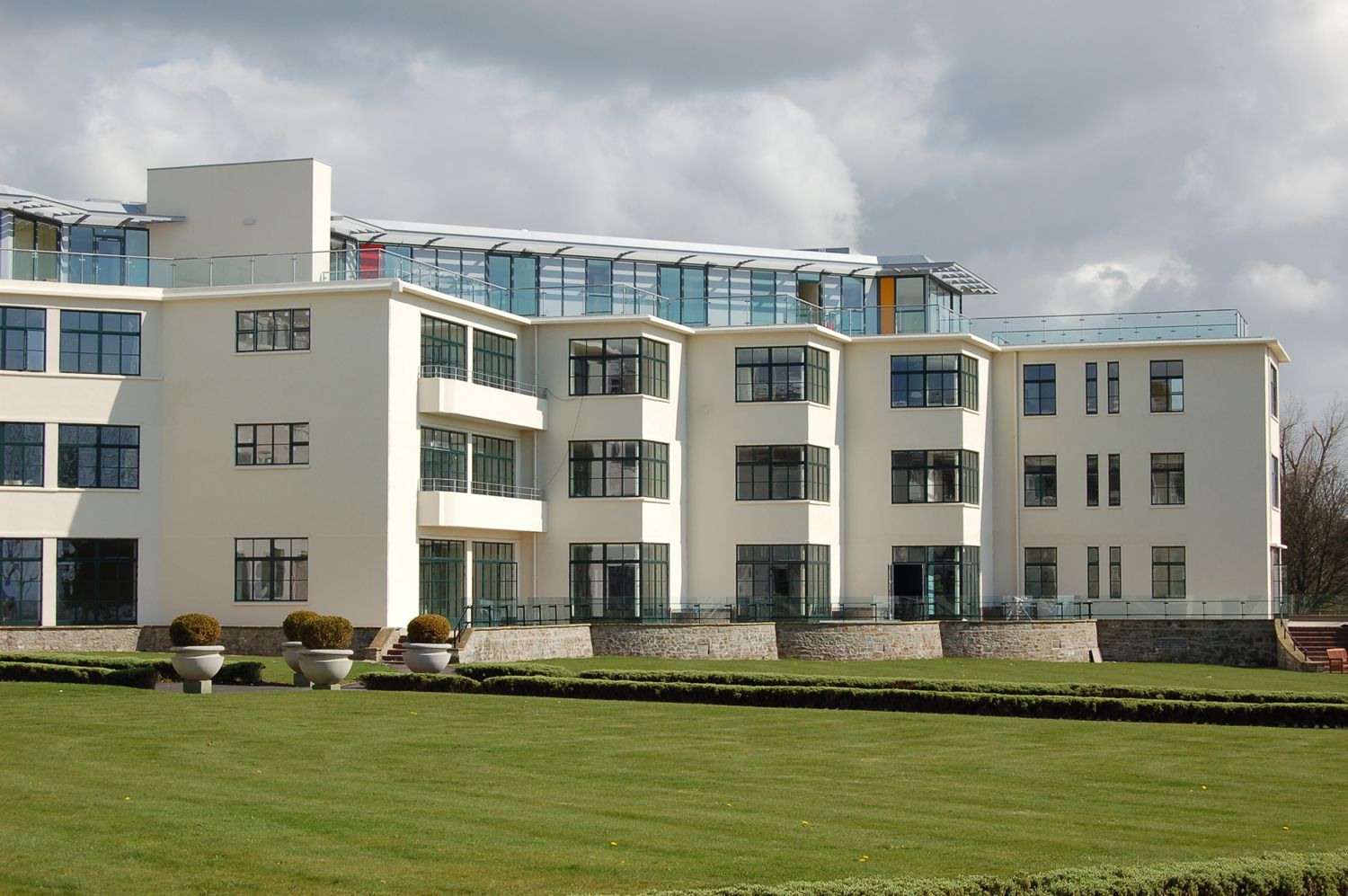 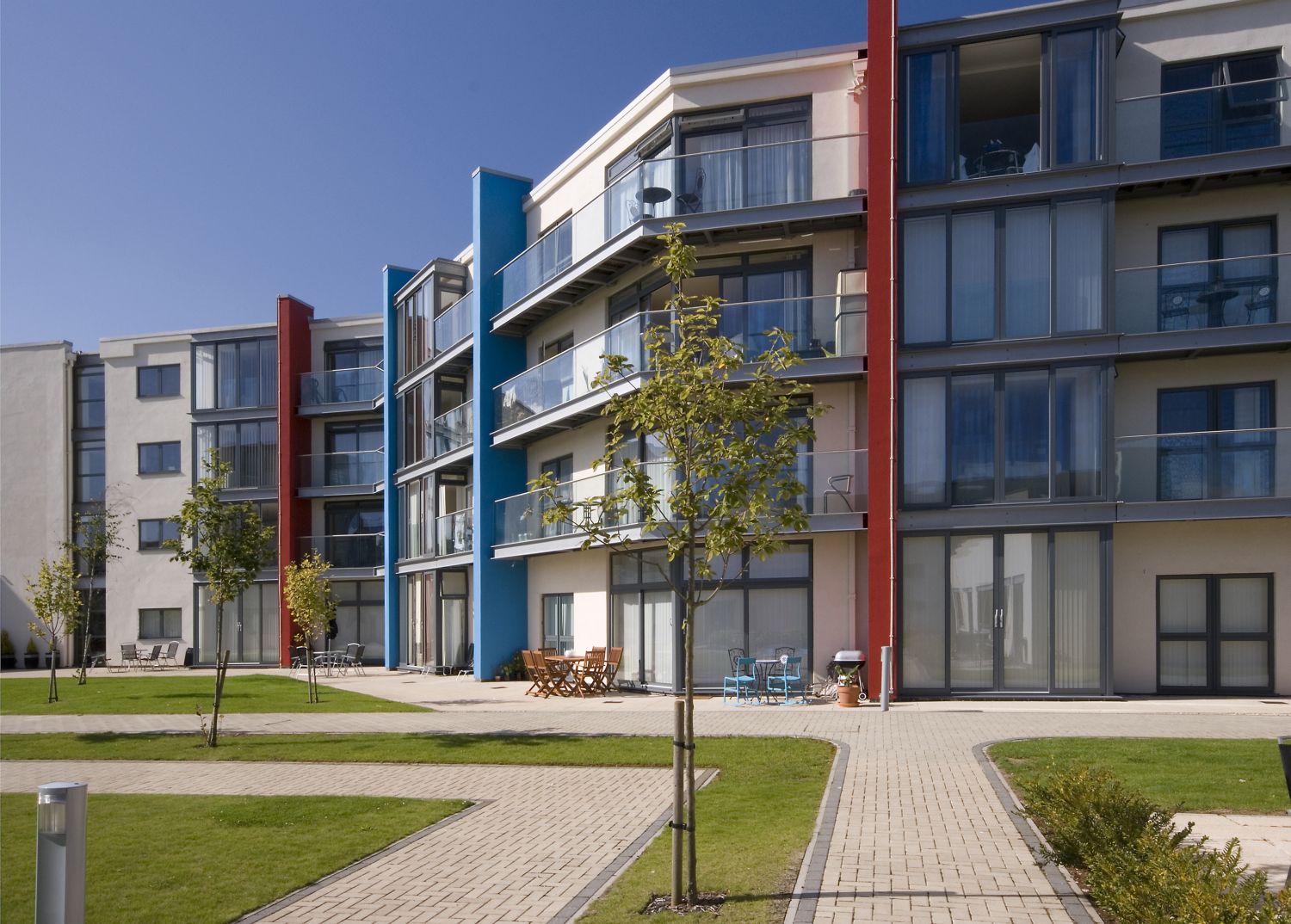 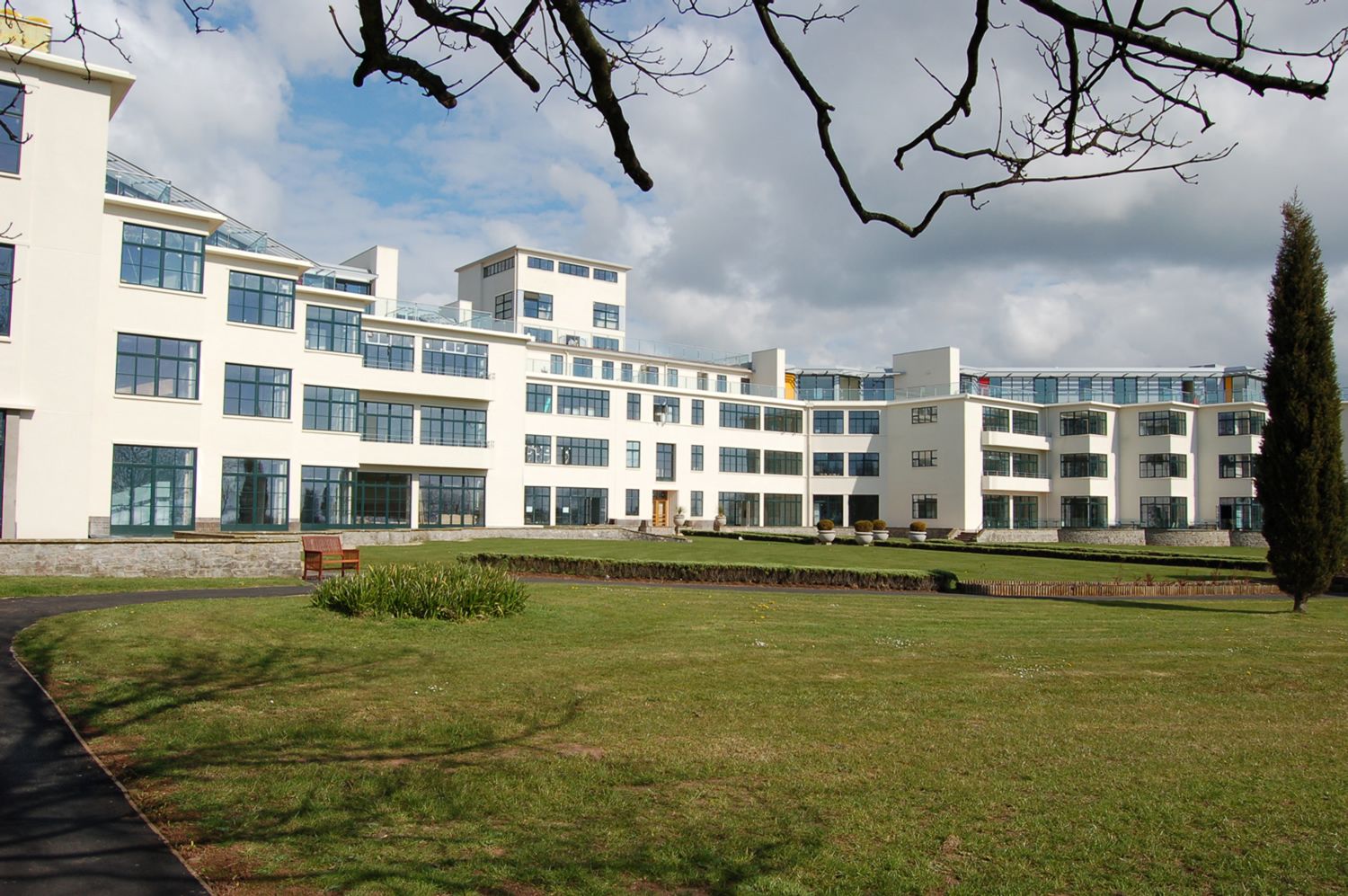 The principal aims of the development were to secure the long term future of the Grade II* listed building and to upgrade the associated grounds, improving the buildings setting. The original brief was to provide, on behalf of Galliard Homes, new residential accommodation within the structure of the existing buildings, together with new accommodation in the east and west extensions of the woodlands block. An additional floor was created and set back from the south façade on the headlands. New additions to the courtland elements were constructed to provide balance and symmetry to the overall plan.

The additions do not copy or pastiche the existing design but utilise the same palette of materials, principally of steel windows set within a rendered façade with horizontal banding echoing the brick panels on the original building. The fundamental design approach to the redevelopment of the old hospital is that the final developed building closely follows the original 1930s concept of a symmetrical building set within a generous landscape.

Key to the development was the repair of the listed buildings which had suffered as a result of general weathering and poor maintenance since becoming vacant. All the elevations were repaired and re-rendered to once again provide the crisp white finish synonymous with the hospital’s historical appearance. New materials on both the new and existing structures were of high quality to match the existing range of materials and all works were carried out in conjunction with conservation experts, the Vale of Glamorgan and Cadw.

Given the challenging scale of the project in providing over 240 flats, the control of the repairs and the consistent approach to detailing uniquely employed a Design Manual prepared by the developer’s conservation architect Frank Woods, in liaison with the architects Atkins Walter Webster (AWW). This was agreed between all the parties, including the local planning authority, and was used as a day to day basis for making decisions, and imposing a strong discipline in maintaining a consistent approach to detail.

From the outset it was important to develop a scheme that would be accessible to all people with disabilities. This raised some matters related to the listed structure, and the change of use required the complete refurbishment and re-organisation of the internal layouts and spaces. The layout of the units is such that they have been grouped around smaller ‘cores,’ this has reduced the scale of the development and provided a sense of ownership for occupants. Within these cores all circulation routes are kept to a minimum so to utilise outward views from the apartments.

A key feature of the movement strategy through the site was the retention of the existing ‘spine corridor’ this is a listed feature which runs directly though the centre of the development from north to south. This link allows the smaller cores to be accessible from this main route and provides a pedestrian route through the development. Movement through the site is assisted by the installation of coloured portals on key routes. These are designed, coloured and located in key areas to signify features within the spine corridor. They have been segregated into 3 types and colours to highlight information points, accessibility points and larger spaces and finally changes in routes. By the simple use of colour these spaces are more legible and accessible to the user.

The overall design utilises a logical approach which allows for an efficient layout and maximises the positives of the site. Stairs and lifts have been inserted / located into the areas which do not benefit from the views over the site and have been grouped close to the apartment entrances to keep travel distances to a minimum. The sub-division of the building allows each segment to have its own character and feel. This is further aided by the existing buildings which differ in their layout, orientation, scale and mass. For example the ceiling height is greater in the headland block (former ward element) than in the more intimate woodlands block (former nurses’ accommodation). These existing features have been incorporated into the scheme and provide a distinct character throughout.

Care and attention to detail was taken to provide an appropriate alternative to the original W 20 series steel window glazing sections – the obvious replacement with new W 20 profiles was not acceptable because of cold bridging. The developer, Galliard, sanctioned research with the window manufacturer Salisbury Glass, to have new dies made for aluminium profiles which exactly match internally and externally the W 20 profiles but which are deeper in section to accommodate the necessary thermal bridging.

The scheme was constructed in a phased development which allowed for a handover of the completed elements when complete. The development followed a southerly path with the northern elements completed initially, and the headlands building overlooking the channel completed and occupied last.

The current structure was built using a solid wall construction which was typical of the period. As a result of this method of construction and the site’s proximity to the Bristol Channel, the structure suffered severely from water damage and damp. Part of the refurbishment was to dramatically increase the thermal properties of the building by adding insulation and dry-lining to prevent water penetration in the living accommodation. On certain elements, insulated breathable render was also specified. In addition, all the existing concrete roofs were repaired and rebuilt with new insulation and weather protection. These simple additions reduced heating requirements and provided internal spaces which are efficient and comfortable to live in and offer a great improvement on the existing structure.

Linked with the thermal improvements was the need to find a replacement for the existing Crittal W20 steel windows. With over 350 windows in the scheme, a replacement was required that would improve the buildings’ thermal properties and be low maintenance and durable enough to cope with the external conditions so as to have a long life span. The new window system developed provided windows with increased thermal properties as well as satisfying the appearance criteria set by Vale of Glamorgan and Cadw, resulting in profiles which matched the original frames.

Decommissioning and removal of the existing clinical incinerator and associated outbuildings on site was also required. At peak use and still with licence to run for a further 17 years, the incinerator was burning some 985 tonnes of clinical waste per year including human tissue and low grade radioactive waste from the diagnostic radiology department. Aside from the visual benefits of removing this facility there was the very significant environmental improvement delivered including the remediation of contaminated ground, improved local air quality, health and amenity benefits for local residents and the cleansing of the surrounding natural coastal habitat.