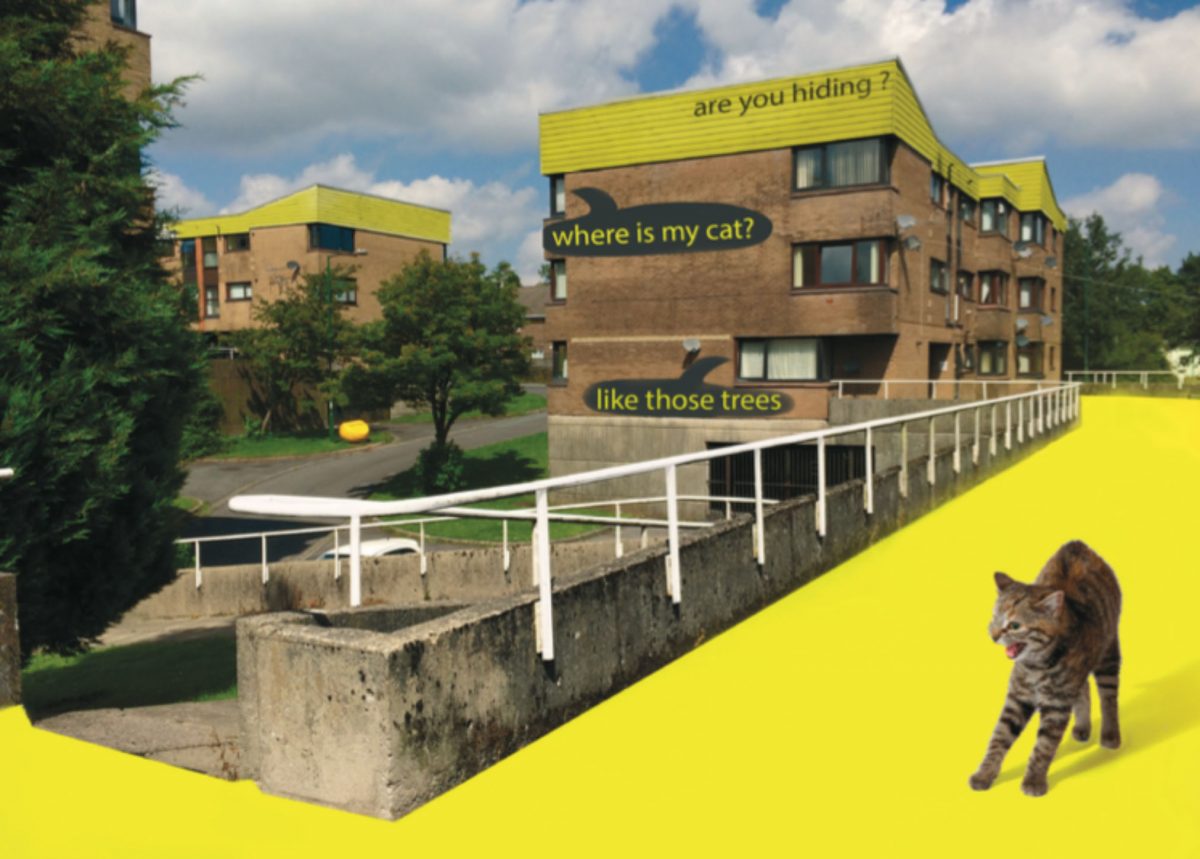 A recent change to the requirements for pre-application consultation with the community and other stakeholders in the planning application process has highlighted the need for to think about how to engage. Can we avoid ticking yet another box and going through the motions? Can we add value through engagement and participation and if so how? September’s HATCH network meeting considered these issues and the challenges and opportunities presented by consultation and engagement.  Three built environment professionals were invited to share their experience and thoughts on the subject and stimulate debate.

Ruth Essex shared her experiences of working with people through a ‘tactical urbanism’ approach. Ruth is a regeneration consultant and creative producer who currently manages the Arts Council of Wales’ Ideas-People-Places programme. She began by challenging the language of ‘engagement’ and ‘consultation’ by instead suggesting that describing the activity as ‘working with people’ or ‘co-production’ can create a different dynamic that can be more productive. Ruth described tactical urbanism as ‘DIY urbanism’ which allows people to quickly change their environment instead of spending time talking about possible changes. She explained that, from her experience, this method of working with communities to change their built environment has been more productive than the classic model of consultation-then-action. It allows ‘quick wins’ which are motivating for communities as they see instant change and are given agency to change their environment. This direct approach can be more exciting for people than looking at plans for a potential project - it essentially minimises planning and maximises activity.

Ruth noted that as well as better engaging people, tactical urbanism can also be used to test different ideas before possibly settling on a more permanent intervention.  Ruth noted how conventional planning processes emphasise the need for perfect results, following lengthy consultation, without room for testing, and learning from the testing process.  Therefore the tactical urbanism method can allow for trial and error whilst preventing costly changes if a project is unsuccessful. An example might be wasted or unused space in towns and cities, awaiting development, that provide opportunities for tactical urbanism to allow ideas to be implemented and tested early. Part of this testing, she noted, is the ability to observe how people use the space and any newly installed hardware, which can help inform future action in the area.

A number of examples from around the world were highlighted by Ruth to demonstrate how this concept had been used in practise. A well-known example was Times Square in New York where a sequence of interventions were successful in leading to pedestrianising the area. Examples from central Europe and the UK demonstrated a range of projects of different scales. 72 Hour Urban Action is a unique architectural competition whereby eight teams are given a different public space in one city and they must design and build a project in three days and three nights. Ruth described this as a successful model for engaging and motivating the community and creating almost instantaneous action in public spaces.

Following Ruth, Owen Davies discussed his recent experience of community engagement on the Arts and Minds project by Arts Council in Wales. Owen is director of Owen Davies Consulting Ltd, a regeneration and planning practice focusing on making places more liveable, memorable and viable. Owen began by defining ‘consulting’ as the action of seeking advice or information, as opposed to ‘engaging’ which is to occupy attention, meaning that engagement should be viewed as a long term interaction with a community.

Owen described his involvement in a particular project which provides valuable lessons for successful engagement. The example was an estate improvement project St George’s Court in Tredegar, South Wales. The team had developed a ‘yellow brick road’ idea and in order to catch people’s attention, prior to organised consultation, they painted a yellow strip through a well-used car park on the estate. This served to signal change and stimulate curiosity amongst the community. In terms of organised consultation sessions, Owen stated that the intention was to make the community feel comfortable coming to the team to talk about their area, so hot water bottles and an abundance of tea and cake were available at the sessions. Although small gestures, they made people feel welcome and ‘warm’ during these events which naturally aided discussion and engagement. Following the event all of the written material was left in situ, to allow residents to view the content and as a reminder that change will happen.

In order to develop a long term relationship with the community, Owen described how the team used a vacant flat on the estate as their project base. This was open every Wednesday for the community to pop in and discuss the project or any other issues relating to the estate. This open house approach led to discussions with the residents about their real day to day concerns, one of which was a concern about front doors being replaced for safety reasons. In order to address this concern the resident artist started to photograph every door in the estate as a record and these images were subsequently displayed on the estate. The process of doing this not only made the project personal to each resident, but also facilitated a reason for one to one contact with and between residents.

Owen concluded that this level of attention and time given to engagement with the community led to a better understanding of their concerns and how the project could help improve their wellbeing. However he noted that the provision of funding from the Arts Council meant this process could be facilitated, whereas in the case of other projects this close and lengthy contact may be less possible.

Like Ruth’s description of tactical urbanism, the observation was made that the success of this engagement could be the punctuation of a long term process with physical interventions and activities. In this instance the social regeneration was most important and this engagement created a sense of ownership and legacy that would outlive the project itself.

The value of creativity

Emma Price is Director of EMP Projects, an arts consultancy which works in brokering curatorial partnerships specialising in the planning of small to large-scale creative and cultural developments. Emma began by reiterating the distinction between consultation and engagement and the many different terms used to describe this process, both within the development and art ‘worlds’. In specific relation to her work Emma explained the value of having an artist on a design team, not necessarily to create a piece of art work but rather to provide a different perspective and alternative method of engagement. Examples she cited were artist Rick Lowe’s What We Made: Conversations on Art and Social Cooperation from Project Row Houses, Houston, Texas, 2006 and The Blue House, a durational art project initiated in the Netherlands by artist Jeanne van Heeswijk in 2005, which was an example of creating space within a development for creative interaction and exchange of ideas. This example demonstrated the benefits of having artists’ in residence within a city and for new development.

Emma also provided some examples of working with artists as creative place-makers and art for the community which is about peoples’ experience of a place, such as the ‘art of getting lost’, whereby participants were directed around a town in such a way that led them to discover a part of their area with which they were unfamiliar.

Emma had a positive outlook on the changes to consultation requirements and saw these as an opportunity rather than a burden.  She has experience of working with developers on the type and scale of projects that will be affected by the new consultation requirements. She works on projects where a portion of the arts budget from private sector developments, via section 106 agreements, is allocated towards arts and creative projects which may have no physical presence. This included national house builders and the challenges of engaging with not only new residents, but existing ones. Emma noted the example of Hafod care home in Barry where funding was allocated for an artist in residence, Heloise Godfrey-Talbot who welcomed new residents as they moved in and gathered stories about them and the place.  Another example was the commissioning of artists Owen Griffiths and Fern Thomas to work with the community on a project based around ecology at a Barrett Homes development in Wick.

The concluding remarks from Emma were that effective engagement through art and design can be about talking with and listening to people and developing a dialogue to allow ideas and creativity to flow. She has found that action attracts a wider range of people, not just objectors, and so can be more effective in creatively engaging a community. Emma recommends that, where a 1% section 106 agreement is allocated for public art, clients and design teams should make the most of it and that in practice she is seeing more developers engaging with this creative process because they see the value of it, rather than out of necessity.

Several examples demonstrated the value of creativity and of tailoring engagement to different projects to yield effective results. The speakers in their different roles documented varying methods to engage more usefully and purposefully with communities, but there was a clear consensus that long term engagement is very different to one-off consultation and that participants will be better engaged with creative change rather than formal consultation.

Sifting the comments from the speakers and the debate, and reflecting on the event I thought that the typical ‘classic consultation event’ is insufficient to truly engage a community on the issues that affect them and will ultimately mean a significant change to their built environment.

How we approach engagement on different schemes and proposals will require creativity with regard to the type of development, the location and the local demographic. As we’ve learnt from the speakers, these creative ideas could vary from tactical interventions, to resident artists, to tonnes of cake! Tailoring ideas to suit the specific project and community will be invaluable. I don’t think that a different form of engagement needs to take a huge amount of time or resources. Even if there is only the time and budget for one consultation event, a little more innovation and forethought can make events different and more engaging and can really make the difference.

From my perspective as a planner, the new consultation requirements can be seen as an opportunity to engage earlier and more usefully with a community and with Statutory and non-statutory Consultees. If the design and development team enters into the process as a creative, stimulating exercise, rather than as a necessary box ticking exercise, great value can be added.

The statutory requirement is for details of consultation to be recorded and regarded within a Pre-Application Consultation report, to be submitted with an application. However if consultation is inadequate and the community and stakeholders are not properly engaged it will be difficult to demonstrate a worthwhile process that improved the quality of the proposals. So this early consultation is only likely to be useful and meaningful if the form and methodology of the engagement is genuine, innovative and creative. If not all participants and design team will fall into old habits and fail to discover fresh, value adding opportunities.