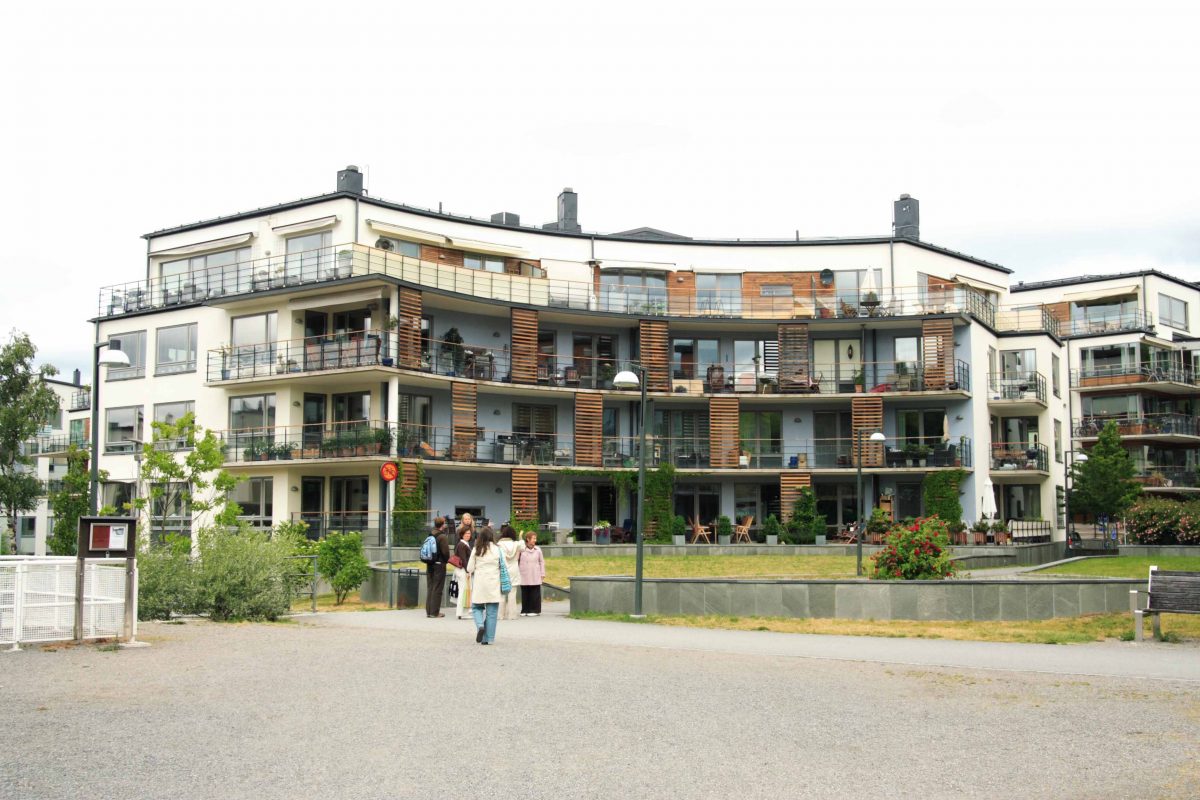 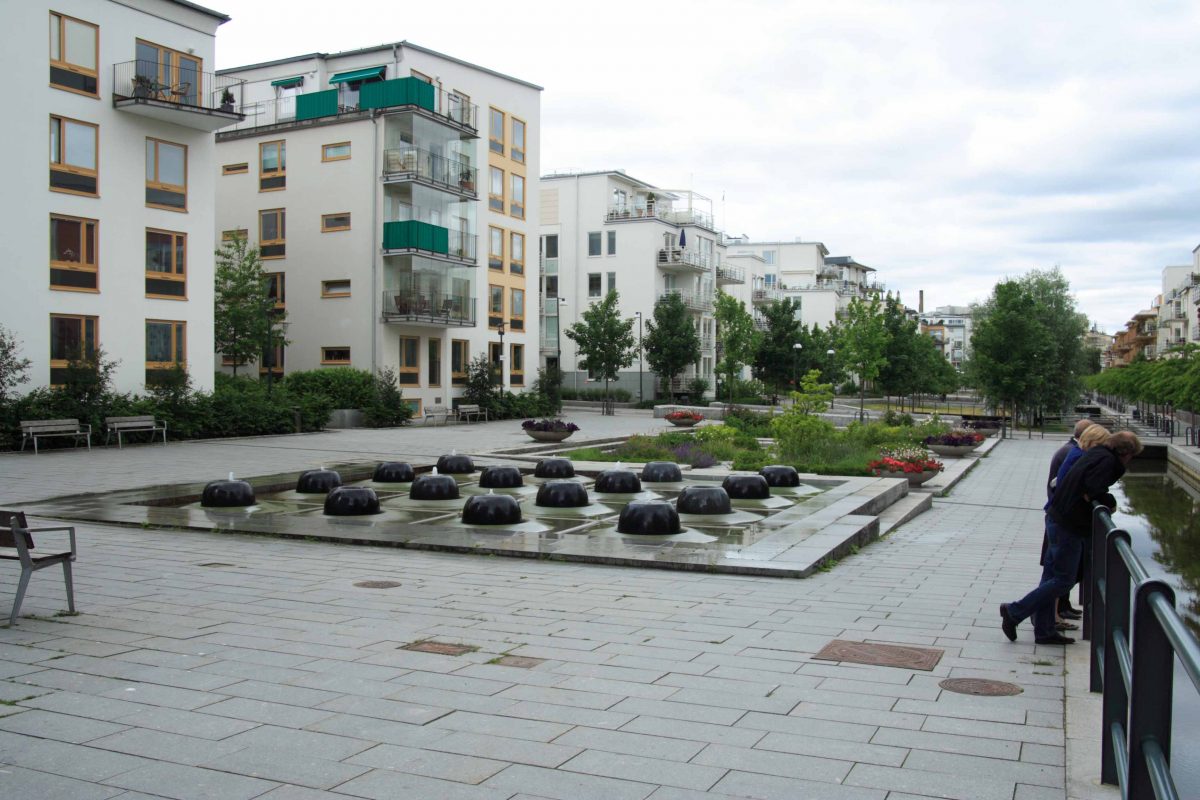 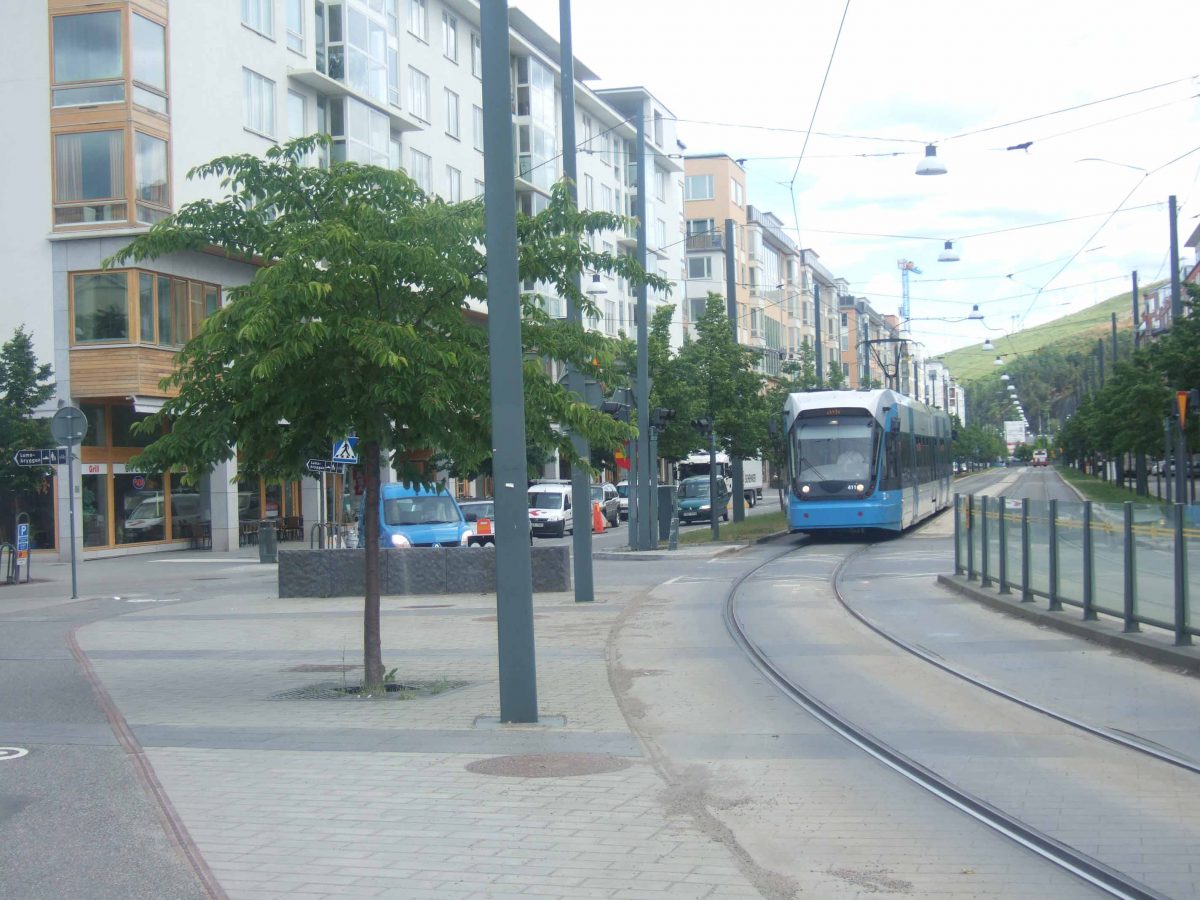 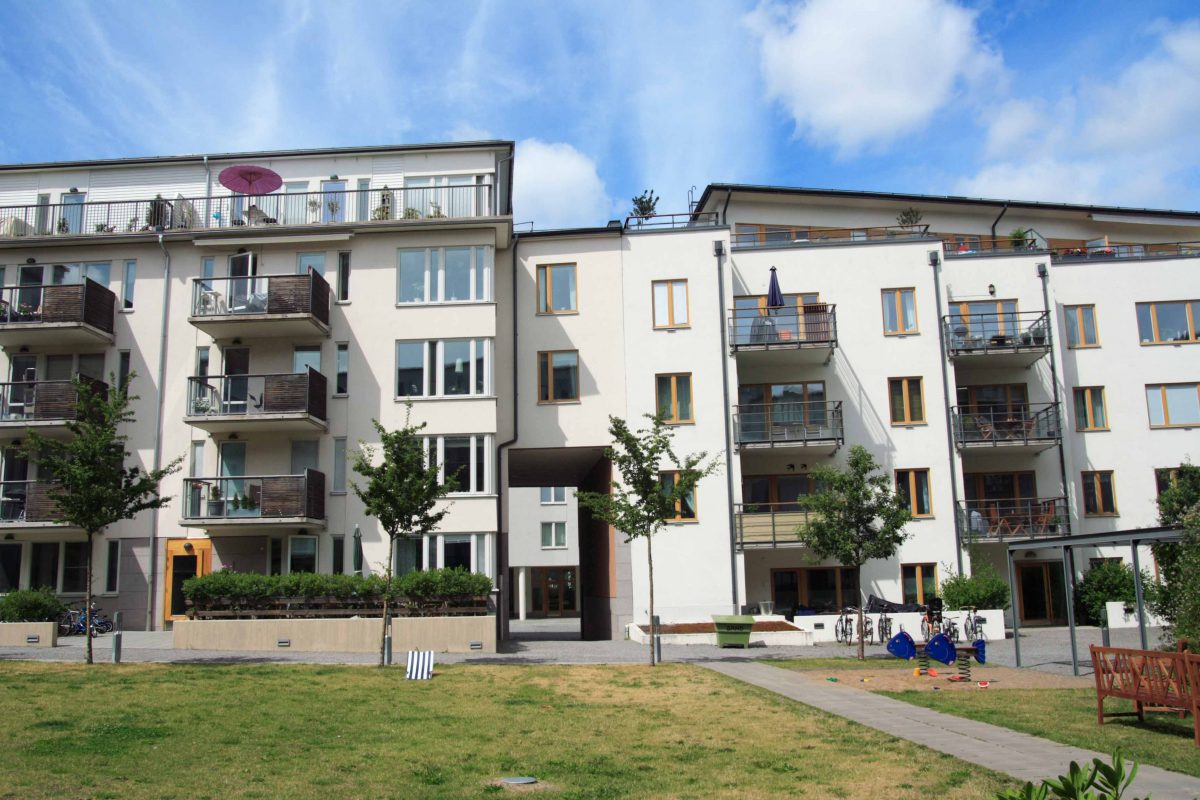 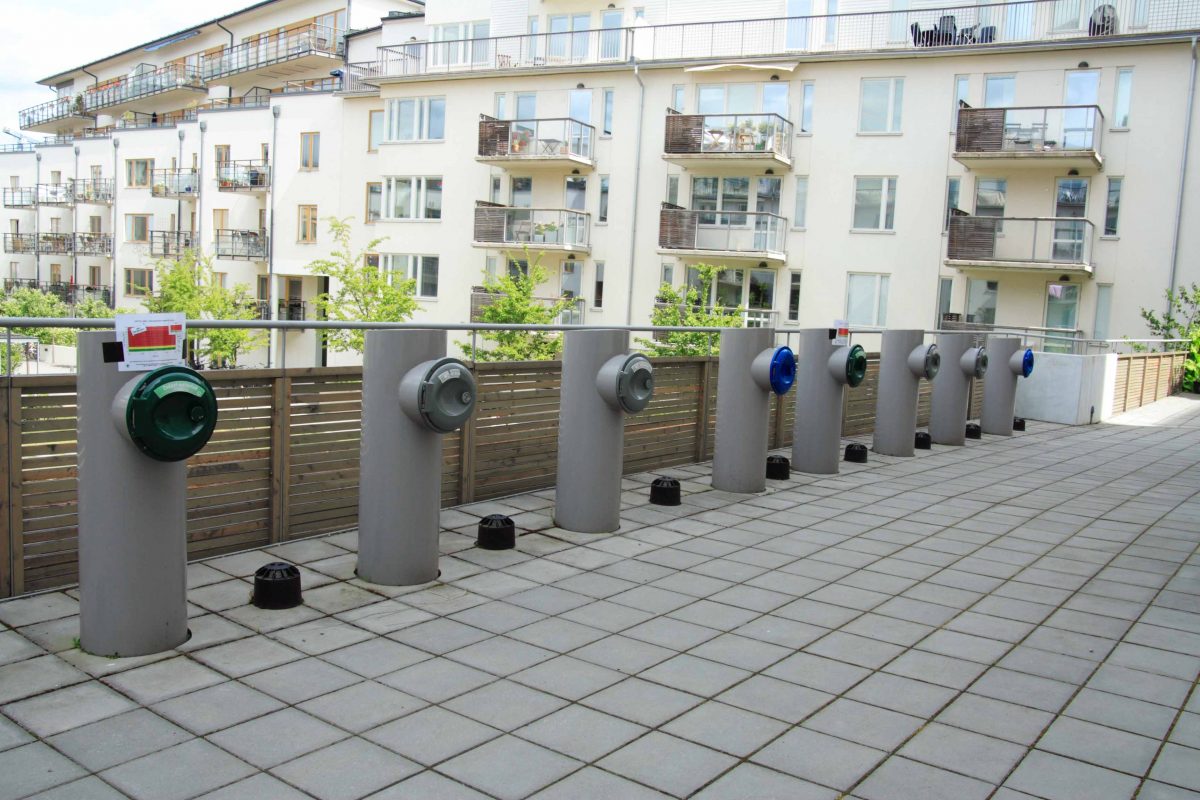 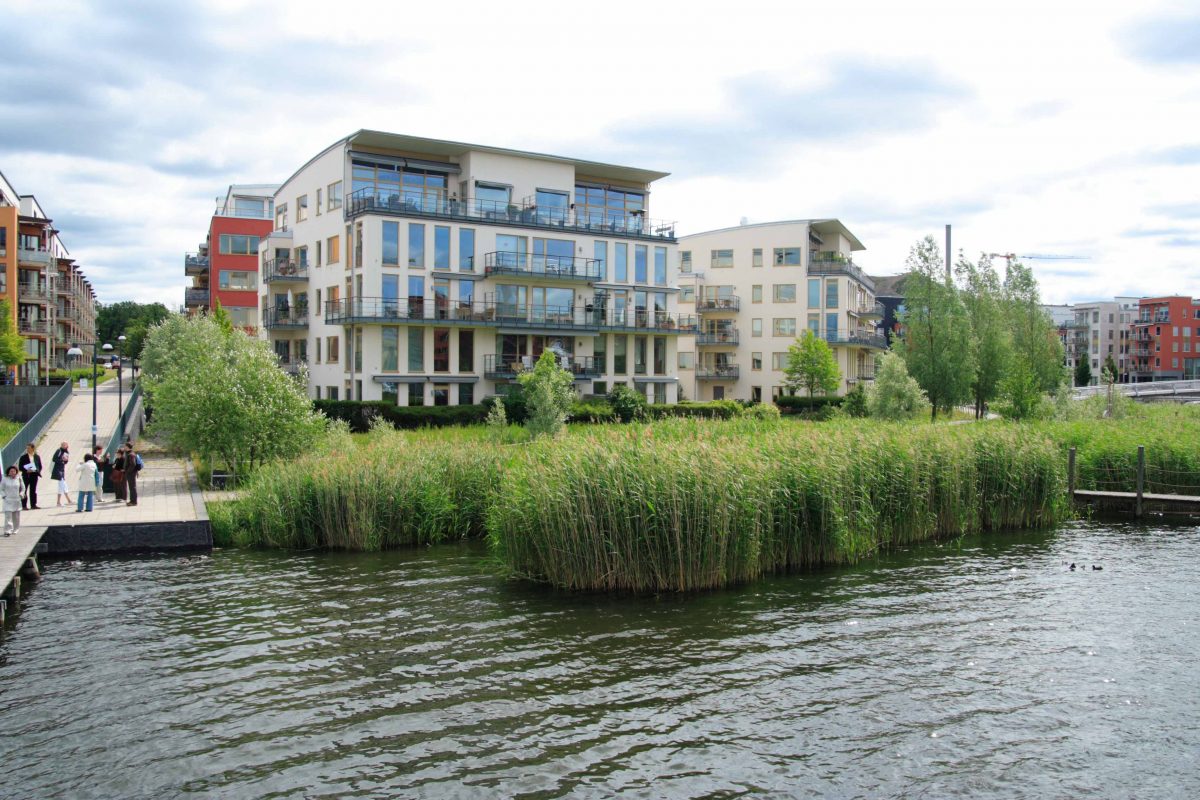 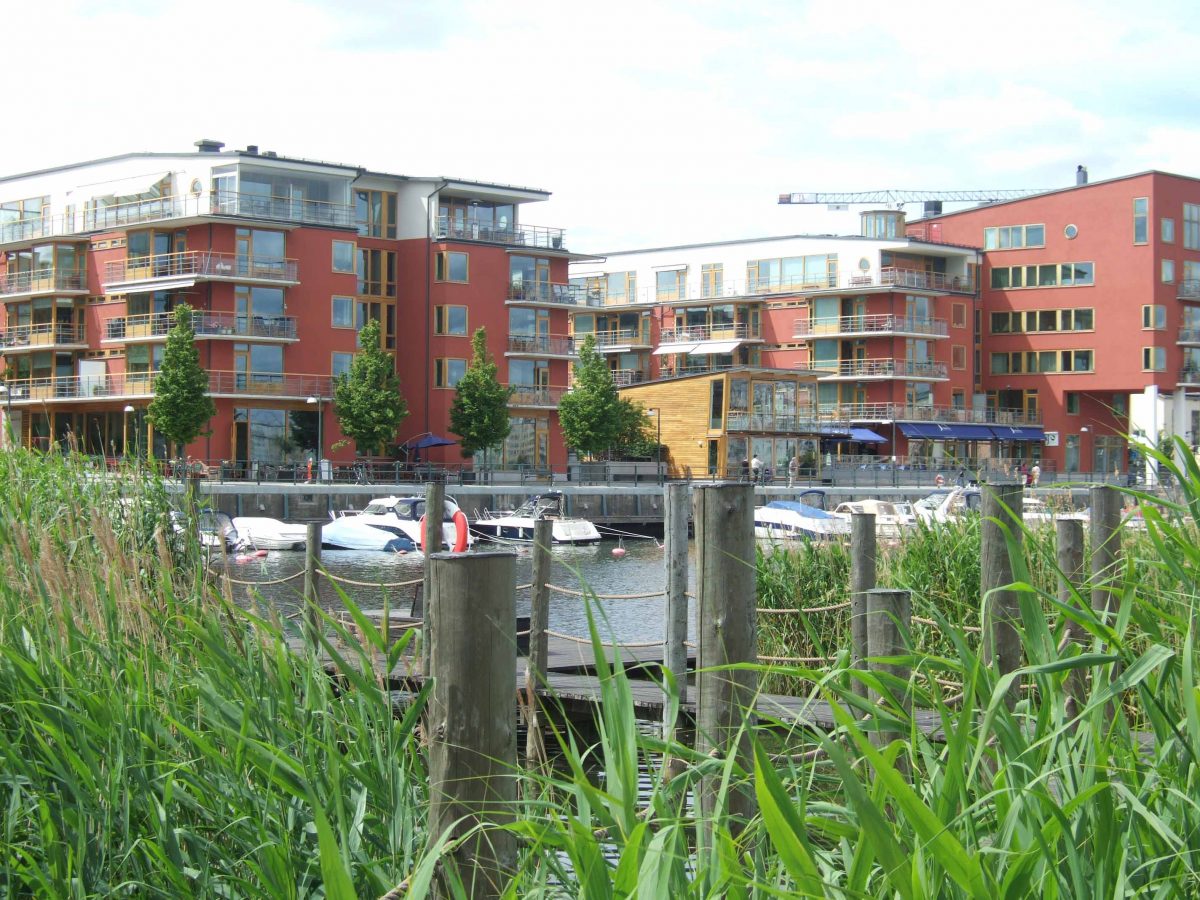 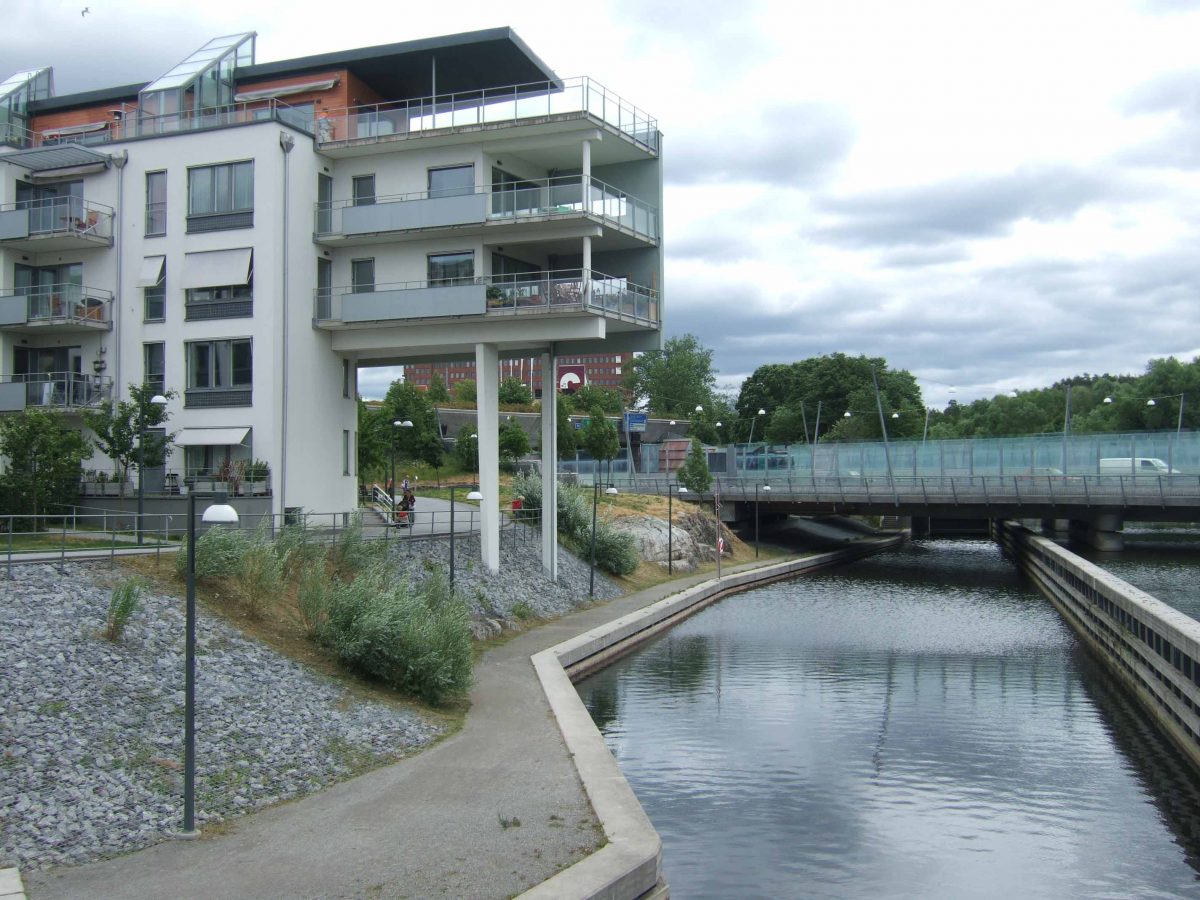 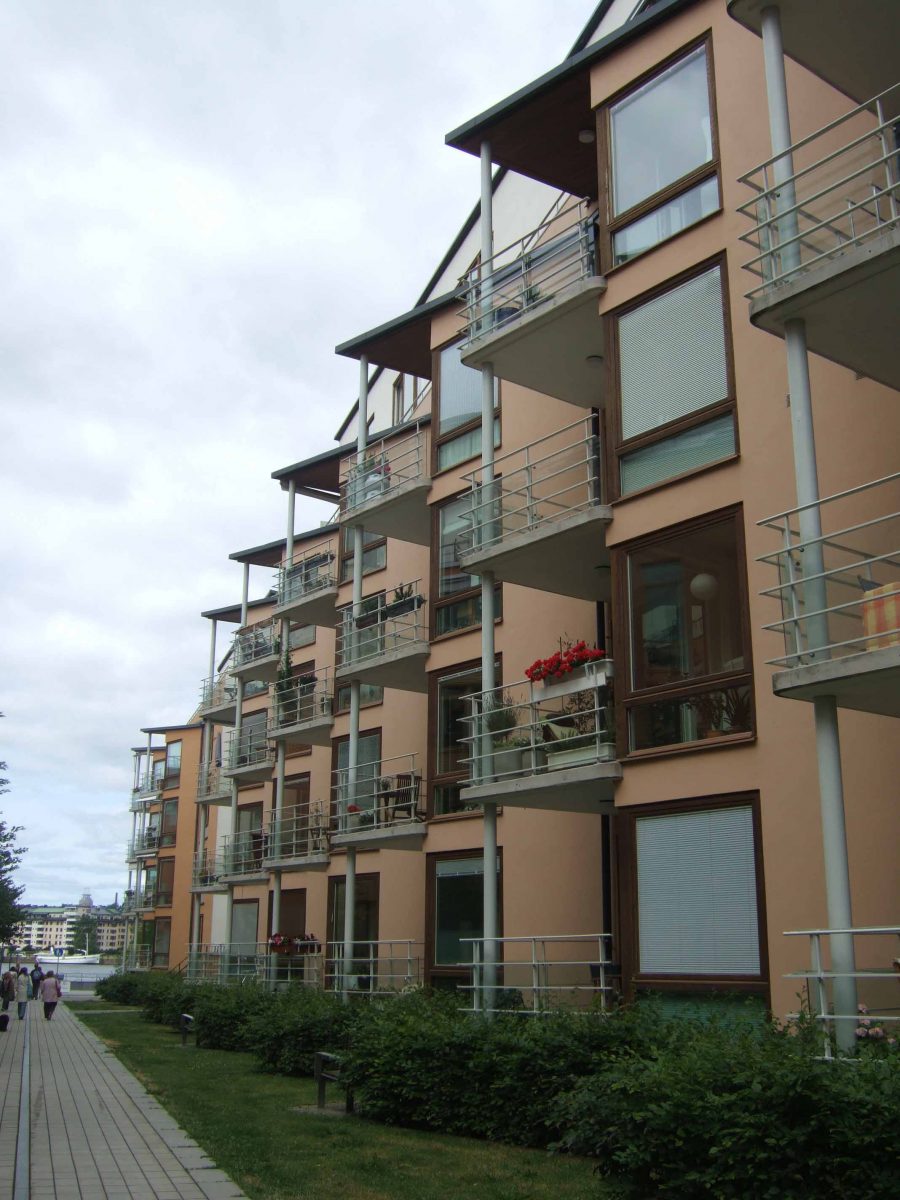 Introduction
Hammarby Sjöstad is a showcase urban extension containing a good mix of uses and sustainable residential development. A former derelict industrial site to the south of the city centre, the area is now identified as part of the city centre core. Masterplanned in the 1990s as part of the bid for the 2004 Olympic Games, the site was originally intended as a modern city district, with a core area housing the Olympic Village. Despite the failure of the bid, the original masterplan was largely adopted to govern the development and from the outset the municipality imposed strong environmental targets for buildings, infrastructure and transportation, alongside an ambitious goal of ‘twice as good’ (i.e a 50% reduction in overall emissions compared with new housing built in the early 1990s] – ref: http://www.hammarbysjostad.se/

Description
Location: Stockholm is located on Sweden's east coast, to the west of the Baltic Sea. The central parts of the city consist of fourteen islands close to Stockholm’s archipelago. The new development district Hammarby Sjöstad (‘Hammarby Lake City’ in translation) spreads across the southern edge of one island, Södermalm, that is in Stockholm city core and the northern edges of two islands in the Greater Stockholm area of Nacka. The southern border of the central area of Stockholm was extended to incorporate the new Hammarby Sjöstad district.

Design and Development Process
The majority of this brownfield site was acquired by the City prior to undertaking a strategic master planning exercise. The City Planning Bureau divided the development phases into twelve sub-districts, and used an approach known as ‘parallel sketches’ to achieve a final masterplan for each of the twelve sub-districts: The City attracted three to four young innovative design teams to ‘test’ the strategic Masterplan and to draw up more detailed proposals for the sub-district. The city then evaluated the sketches and assimilated the best features from each to arrive at an agreed detailed Masterplan.

Subsequently a design code was prepared by the city and the design team in order to deliver the detailed plan for each sub-district. The design code implementation was secured in an appendix to the development agreement between the City and the selected development partner.

The sustainable environmental measures are not part of the design code. In order to introduce diversity, each plot is designed and developed by a different team.

The built form is dominated by a 37.5m wide boulevard and transport corridor, connecting the key transport nodes and focal points. A grid structure has been used to organise the urban blocks with semi-open block form. The scale of development varies from four to five storeys along the waterfront and 6 to 8 storeys along the main corridor. Retail, food and drink uses are allocated at ground floor level fronting the major public space. Balconies are widely adopted to provide natural surveillance to the street, communal and private amenity. The buildings have a contemporary architectural style but sit within the traditional city block (and density) structure. Glass is used as the core building material, and is supported by the sustainability technology. Landscaped pedestrian and cycle routes benefit from the grid structure invested in by the city and form a permeable and legible environment. Developers are responsible for completing the external, semi-private landscape spaces within their urban blocks. The existing vegetation such as reeds and rushes are retained as a part of the new landscape and an existing protected oak forest has been preserved to create accessible woodland right next to the dense living environment. The development relates well to the waterfront and maximises views to water and green spaces.

Hammarby Sjöstad’s public transport system now forms a part of Stockholm’s integrated public transport network. Trams run along Hammarby Sjöstad’s main boulevard connecting with the city’s underground network and three new bus routes, including a night bus, all serve the area. In addition, a free pedestrian ferry links the southern part of Hammarby Sjö with the northern part on Södermalm (the next main island towards the city). A car-pool managed by car rental companies has been introduced, and is used by 7-8% of the total households.

Living spaces are generous by UK standards and a typical two-bed roomed flat has a floor area of 80m2, compared with the British new build average of 60m2. Floor-to-ceiling heights are 2.8m, rather than 2.4m, to allow more light. The homes vary in size from studios to five-bed family apartments.
Sustainability Credentials
Sustainability was integrated from the outset. This ensured that the necessary infrastructure was installed.

The key environmental measures include:

• Land decontamination and clearance, using biological rather than chemical treatment.
• Environmental assessment of all construction materials, which should be sustainable, non-hazardous and eco-certified where possible. The focus is on durable, recycled/recyclable materials such as glass, wood, steel and stone. The following materials are not permitted: chemically-treated timber; copper pipes for drinking water; virgin gravel and sand. Regular ‘eco-inspections’ are carried out to ensure compliance.
• The Combined Heat and Power (CHP) district heating system, fuelled by biomass and pre-sorted combustible waste provides most of the heat demand as well as generating electricity.
• The remaining heat demand is met by extracting waste heat from the wastewater treatment plant. The cooled and treated waste water is used in the district cooling network.
• A vacuum-driven waste disposal system conveys pre-sorted solid waste to be recycled, or used to produce heating and electricity.
• Domestic water consumption is reduced to 100 litres per person per day.
• Storm water is treated locally in settling tanks. It is then drained into canals which run through the site and is eventually released into the Hammarby Sjö, the adjacent sea.
• Solar panels and solar cells are installed on the roofs of some buildings.
• ‘Ecoducts’ ie planted viaducts and green corridors link the development with the vast forested area of the Nacka nature reserve to the south of the site.
• Substantial investment has been made in public transport provision, in the form of a new tram link, good bus routes, and free pedestrian ferry. A car pool with around 30 biofuelled cars is used by 10% of households. There are numerous pedestrian and cycle paths. The aim is for 80% of all journeys to be by public transport, foot or cycle by 2010.
• A methane digester is used to produce biogas for vehicle fuel and around 1,000 gas stoves in Hammarby. The remaining sludge is used as a fertiliser in the forestry industry.
• Super insulation [250mm+], low energy lighting and triple glazed windows are the norm.
• GlasshusEtt, information centre acts as a community education centre to promote sustainable lifestyles. The building itself has been constructed to achieve a good indoor climate with low energy consumption. This has been done through the installation of solar panels; using a biogas boiler to meet peak heating requirements; a biogas stove for the kitchen area; and a heat pump that takes the energy from the pumping stations own moist heat and the waste heat produced by the mains power installation, provide heating. For the first time in a Swedish commercial building the GlasshusEtt used a fuel cell (an advanced energy converter) generating oxygen and energy. Biogas is used for the fuel cell.

Evaluation
Stockholm Municipality have successfully used their power as a land owner to create in Hammarby Sjostad a remarkably successful and sustainable urban neighbourhood, combining a high quality public realm and residential area with a diverse range of shops, services and facilities. High levels of political leadership and municipal partnerships as well as an integrated planning approach and a collaborative design process, have ensured that the core principles of the masterplan were delivered. Key successes lie in the following areas:
• The use of the ‘parallel sketches’ approach resulted in a high quality masterplan for each of the sub-districts.
• A high quality of masterplan ensured a high quality of public realm, permeable urban form, accessibility for all and a successful green space network with a good mix of land use.
• The use of a design code raises the developments overall quality, whilst allowing for a variety of creative responses.
• Essential public sector partnerships and investment in infrastructure and public transport stimulated the market for residential development and helped secure sustainability criteria.
• Commitment to high standards of environmental performance based on ‘closed-loop’ technologies and district-wide solutions (50% reduction in emissions compared with the 1990s Swedish standard). By the time the development is completed it is estimated that residents will produce 50% of all the energy they need, via district wide systems which recover energy from liquid and solid wastes.
• A well-resourced, highly skilled team within the City of Stockholm, capable of making careful judgments about design quality.

Some opportunities were not pursued in terms of the environmental treatment and there is no provision for recycling the collected rainwater (e.g. for WC flushing); there is no overall carbon reduction target in the project; the renewable energy ambition has not been pursued to its full potential. Overall, Hammarby Sjöstad is a very high quality scheme exemplifying the benefits of well designed layout, good use of coding and a commitment to sustainable transport and utility infrastructure.

Acknowledgements
In June 2008 a delegation from the Commission was hosted by Professor Professor Gören Cars, Head of Urban Planning and Environment and Jerker Söderlind, Researcher at the Kungliga Tekniska Högskolan (Royal Technical Institute), and they provided an overview of the Swedish planning system. The Head of the Strategic Division (Planning Department), Torsten Malmberg, presented the strategy for the development of the city which provided context for the urban extension project at Hammarby Sjöstad. Malin Olsson, head of Division (Planning Department), and Kristina Meynes, Development Department of Stockholm City Council hosted the site visit.