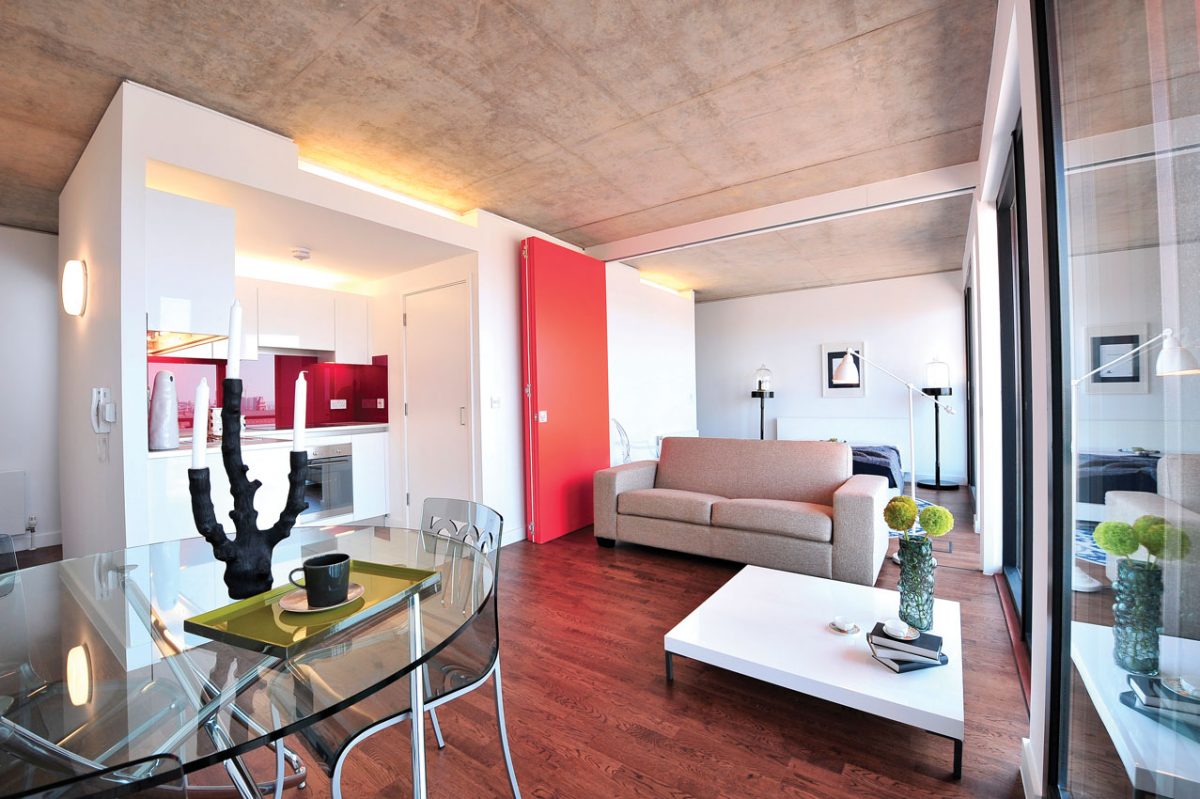 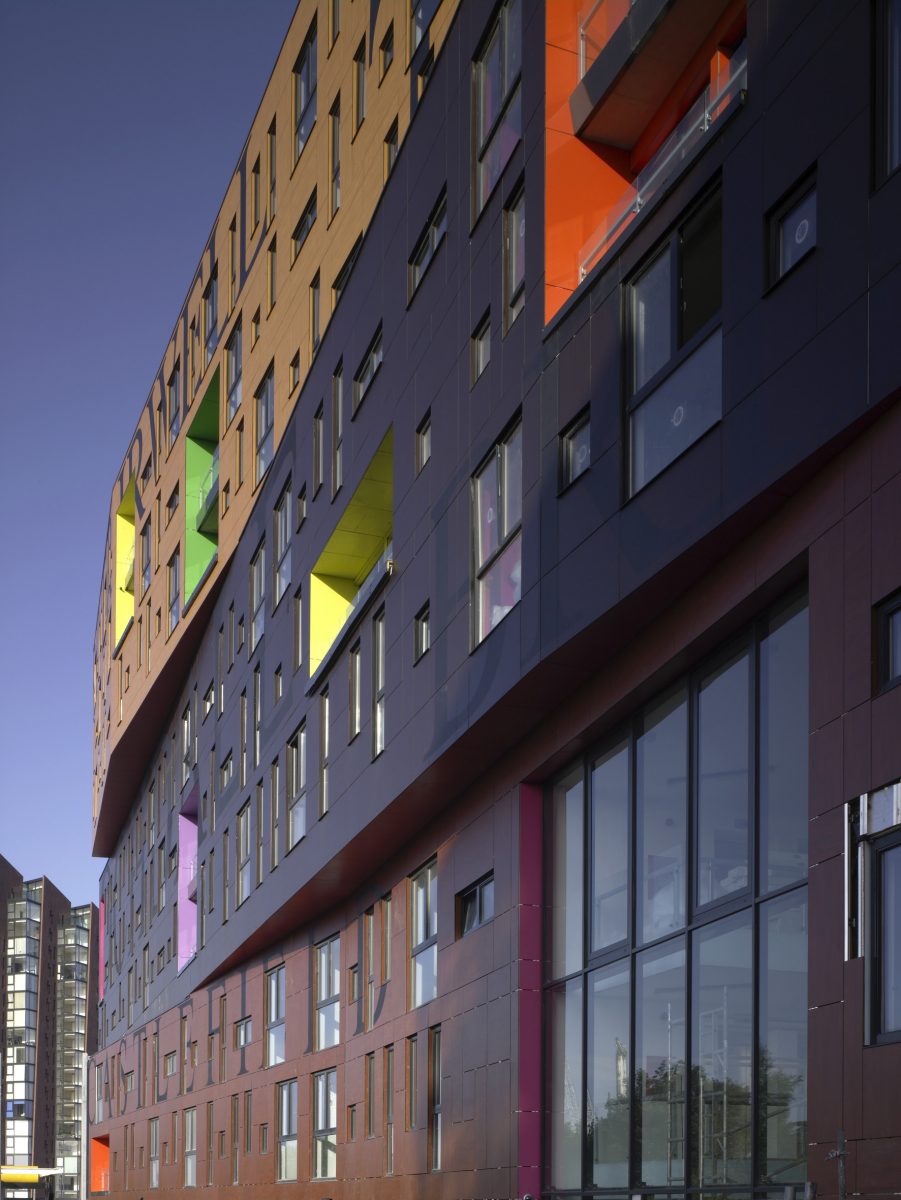 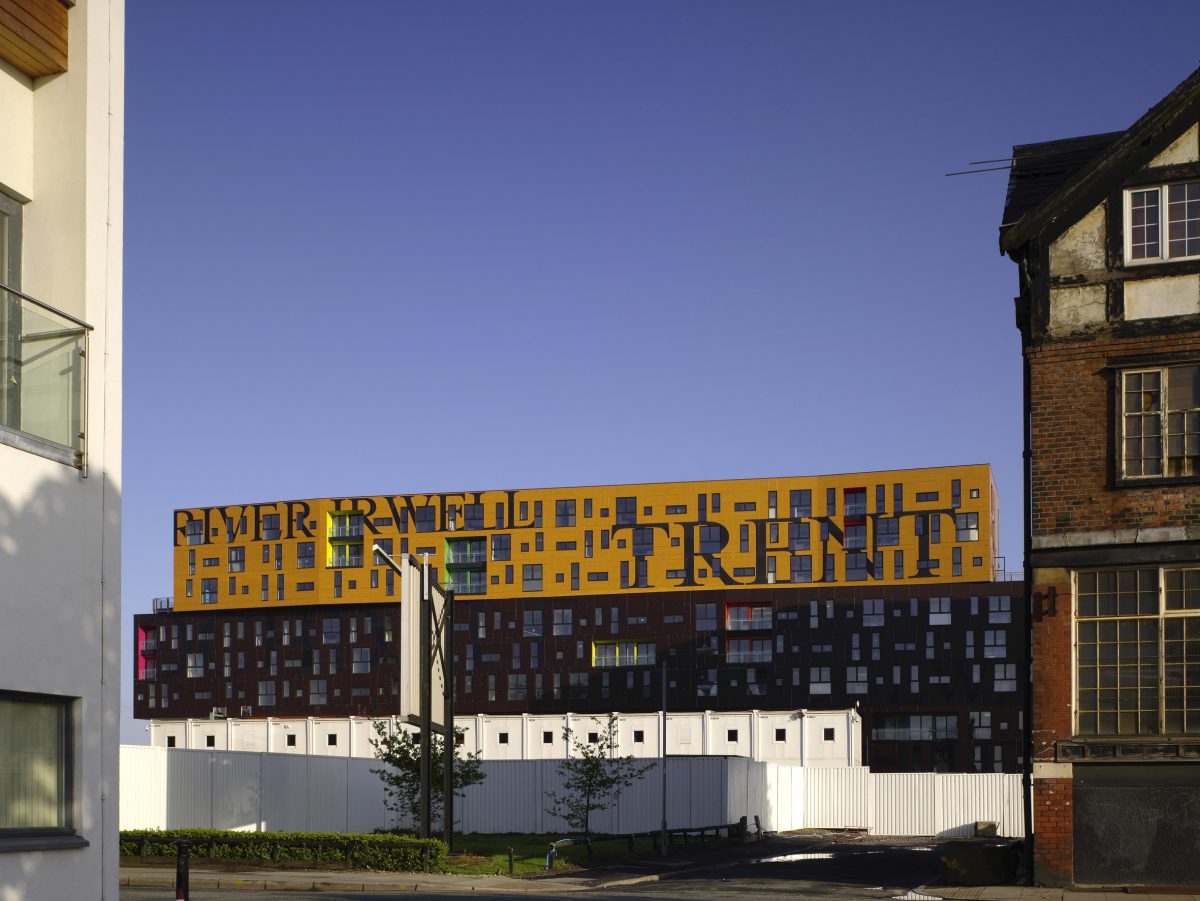 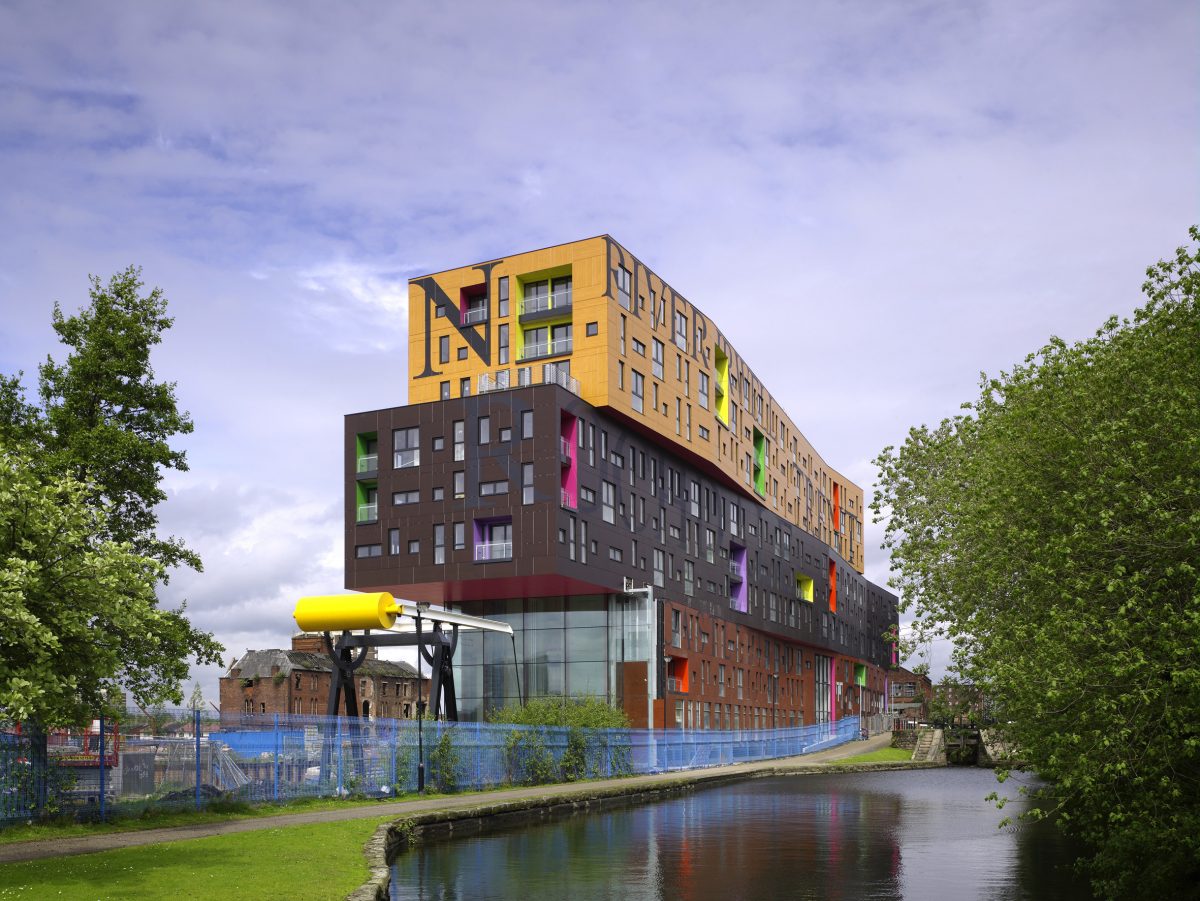 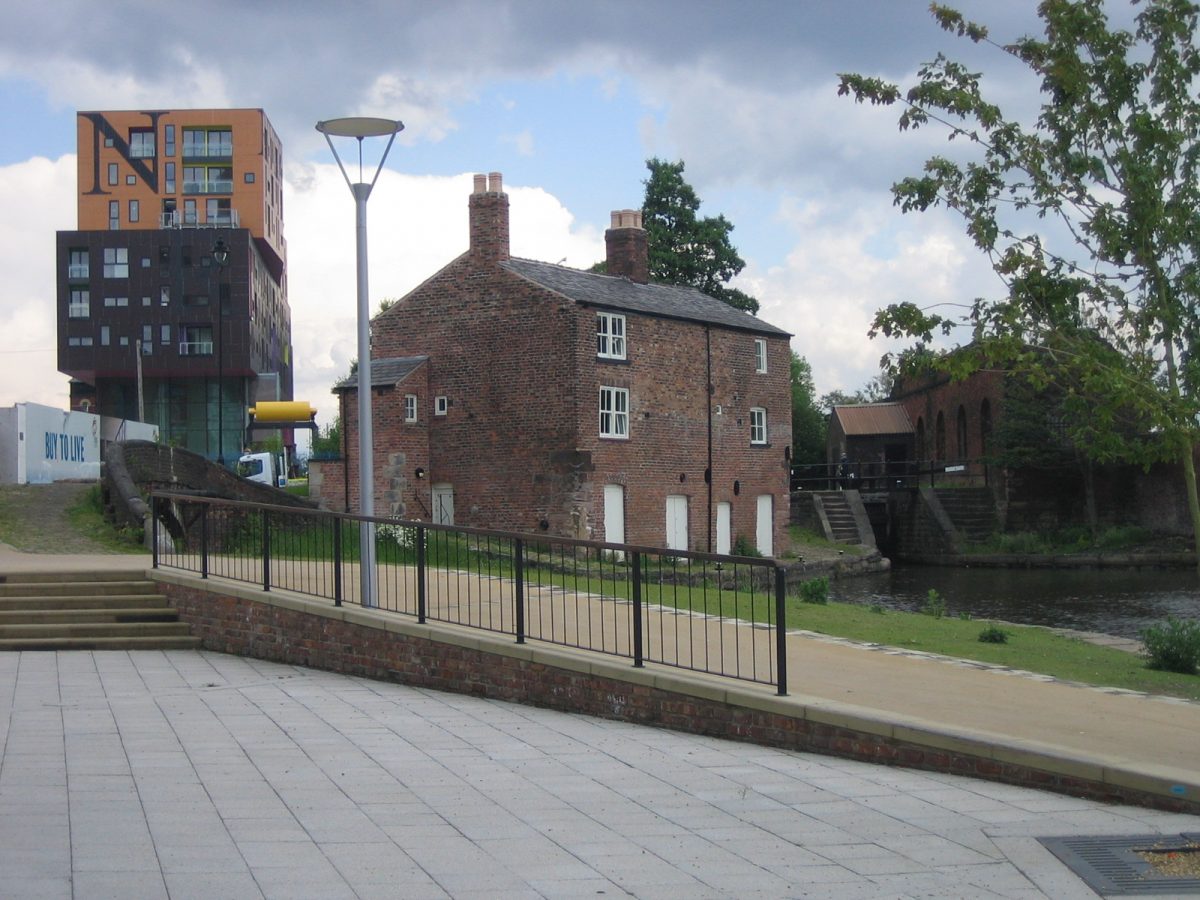 Chips is part of the New Islington Millennium Community in Manchester. This building demonstrates a highly creative approach to an apartment block. It’s bold, colourful and a great addition to the masterplan for New Islington on a narrow, long, site adjacent to the canal, a ten-minute walk from the city centre.

Each of the communities was carefully master planned to include green open spaces, wildlife areas and recreation facilities so as to provide high quality public and private realm where community life can flourish.

Good transport links were a priority, and planners were tasked with giving as much thought to the needs of pedestrians and cyclists as to car-users. The Programme has attracted some of the most talented architects and successful developers in the UK, who all rose to the challenge of delivering exceptional places to live and work.

Seven developments have been delivered regionally. A central team was tasked with ensuring that the standards set were deliverable and consistent, and that the means of meeting the standards were recorded and collated so that lessons learned were widely disseminated throughout the housing industry.

Despite a slow transition through the planning process on some of the sites, all seven are now delivering homes built to the Millennium Community standards including to Eco-Homes Excellent (the relevant standard at the time). Themes contained in the New Islington development address environmental sustainability, social inclusion, new housing typologies and creating a sense of place and destination.
Chips is a 9-storey, 16,200m² gross, contemporary residential development, providing a mix of living, studio and restaurant spaces.

Alsop Architects were appointed by Urban Splash, to design the building in 2002 following the completion of Alsop Sparch’s Strategic Framework for the New Islington area in Manchester, England. The concept for the building was inspired by three fat chips piled on top of one another.

The site for Chips forms part of the New Islington Strategic Framework area to the North East of Manchester city centre. The overall site, which is brownfield, is bounded on the North West by Redhill Street and the Rochdale canal; on the North East by waste ground north of Woodward Place and by Weybridge road and Carruthers Street; on the South East by the Ashton Canal and on the South West by Cardroom Road and Vesta Street.

Specifically, the Chips site is the portion of the area formed on a peninsula directly north of and enclosed on the southern face by, the Ashton canal. Additional canal arms have been constructed to the east and west of the site enclosing it with water on three sides.

The Chips site is narrow and linear at just 28m at its widest point and approximately 120m long. It accommodates a level change of approximately 2.5metres along its length with the south west tip being the lowest and the north east the highest point of the site.

Design Process
Alsop Sparch developed the scheme in close collaboration with the local community. Using the Alsop strategy of engagement, the masterplan and the building design were developed from an extensive community engagement exercise over a six-month period. Local residents were taken on site visits to other high density residential developments that support the sustainable infrastructure desired. They were directly asked about the type of accommodation they wanted, the type of spaces and importantly the facilities that they felt the community would require. Residents’ opinions varied and the wish list included waterside living, healthcare facilities and parks as well as the best chip shop in Manchester!

The ambition for Chips was to create a high quality, high density affordable development, the scale of which was reduced by the juxtaposition of the massing of the architecture. The scheme was conceived to provide variation and unique apartments within a high density block. All residents were to be near water, to see water and to be able to use the new canal arms as a recreational facility.

The mix of apartments, studios, workshops and restaurants stitched into the overall building form creates the necessary diversity of use. The building was raised off the ground so that all units and users are elevated above the ground plain.

The principal idea of the apartments was to reduce the amount of unused circulation area and to make the apartments open plan, flexible and generous. Compact pre-fabricated kitchens and bathrooms sit within an overall apartment plan as opposed to being separated rooms. Folding partitions allow rooms to be joined together to create larger areas. The pods within the apartments house all the electrical and servicing requirements of the unit freeing the outer walls from switches, pipes and clutter. Large and varied window shapes provide variation and maximise daylight.

The building is constructed using a concrete frame which inherently assists with the acoustic and fire protection performance of the development and allows the apartments to have exposed concrete soffits. Externally the building uses a rain screen façade clad in composite Trespa panels which allow for the use of a diverse range of colours and for the large scale text, to be applied to the façade.

Sustainability Credentials
The scheme achieves a BREEAM Eco-Homes Excellent rating, conforms to the Manchester Methodist Housing Trust scheme’s stringent development standards and also meets the sustainability guidelines as set out by the UK Homes and Communities Agency as a part of the Millennium Community programme.

Designers Evaluation
The project strives to define a 'quality of living' statement by combining outstanding design with technological innovation while embracing key concepts of sustainability, integration into the urban landscape and the provision of inspirational and sensational apartment units.