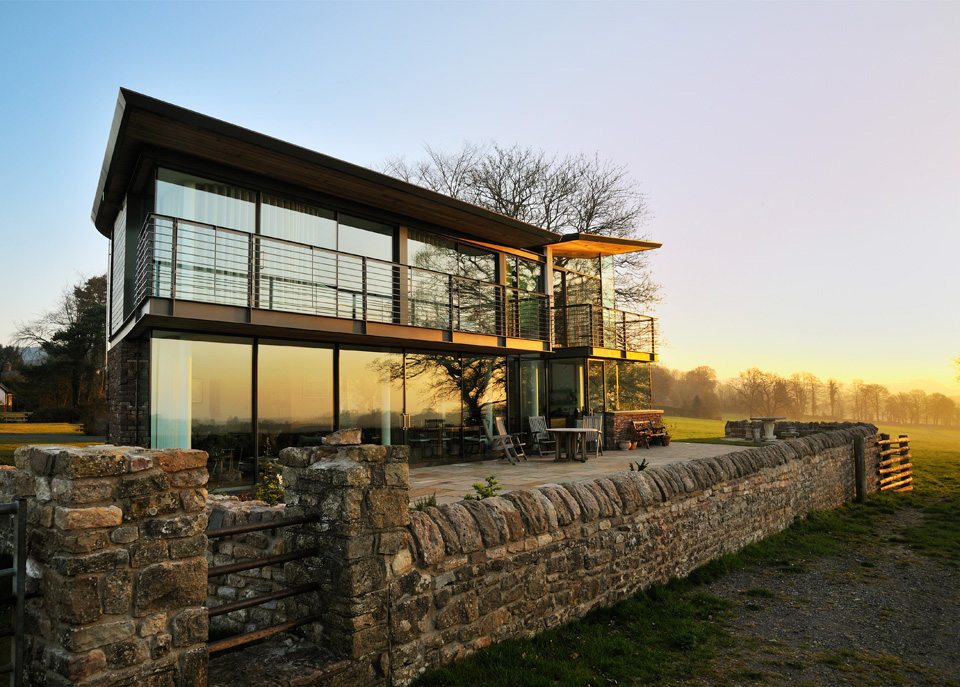 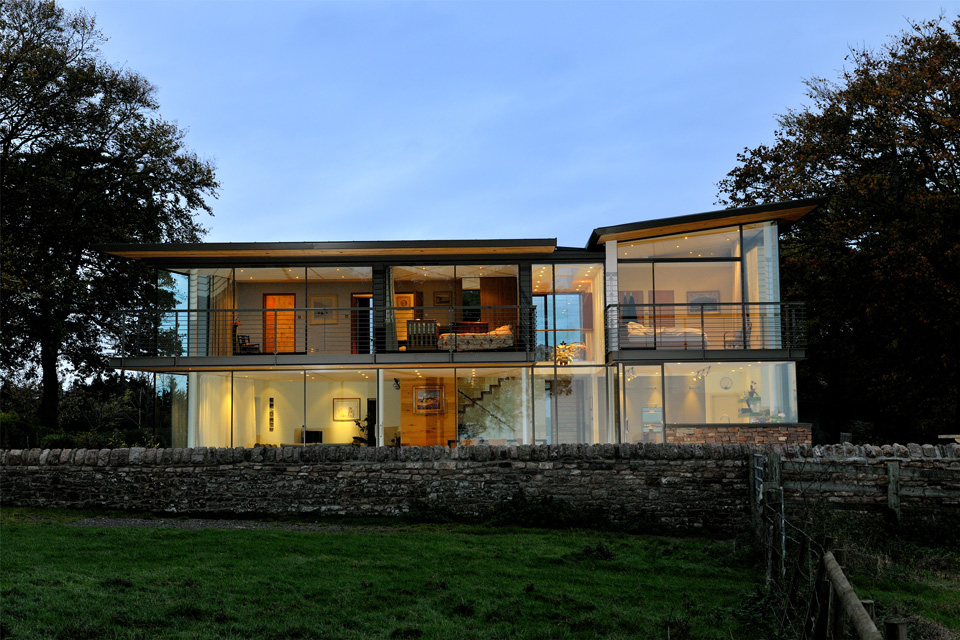 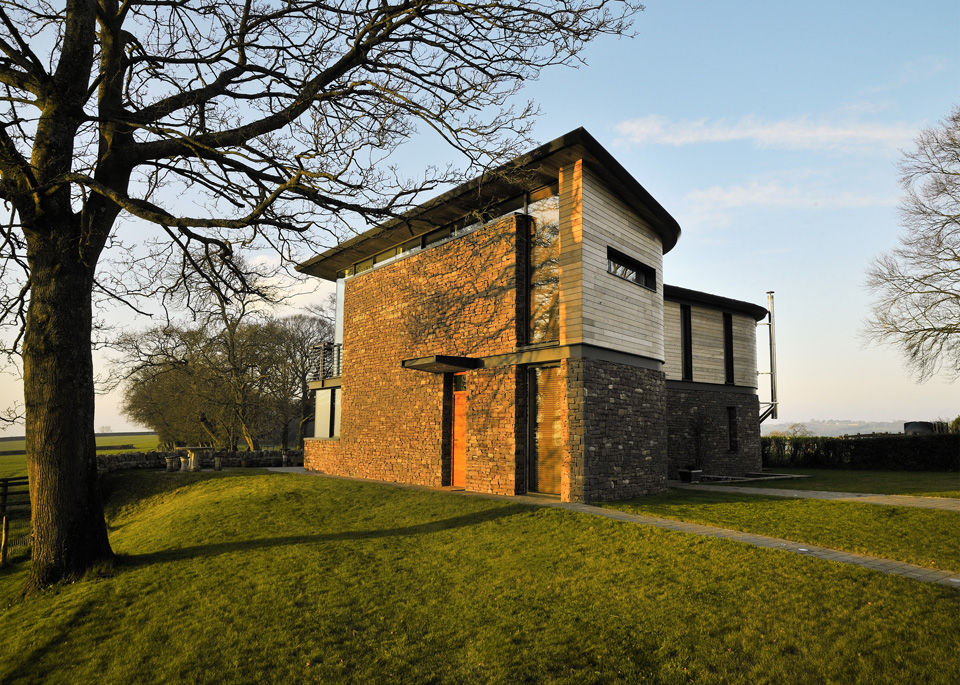 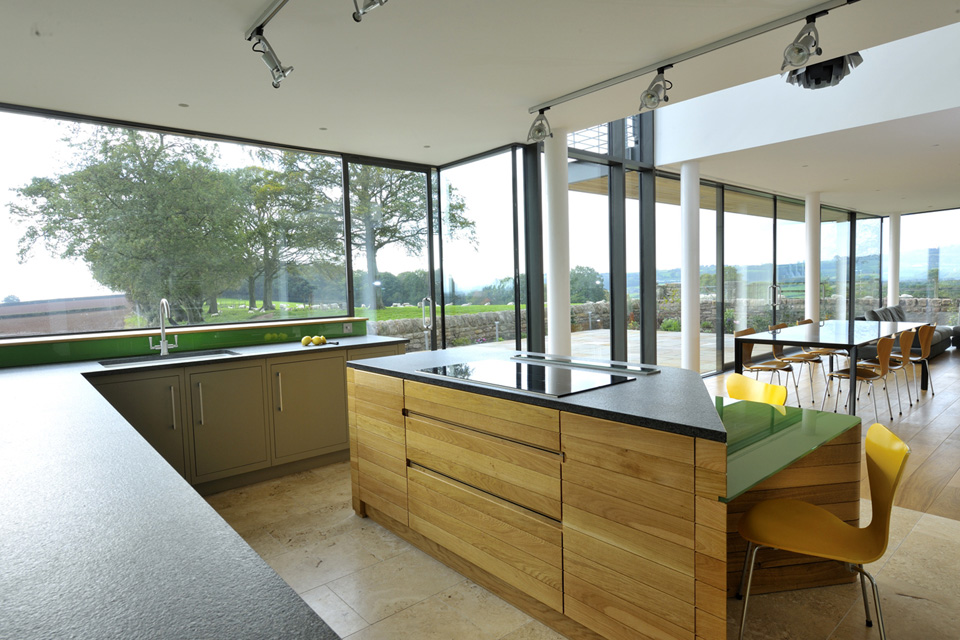 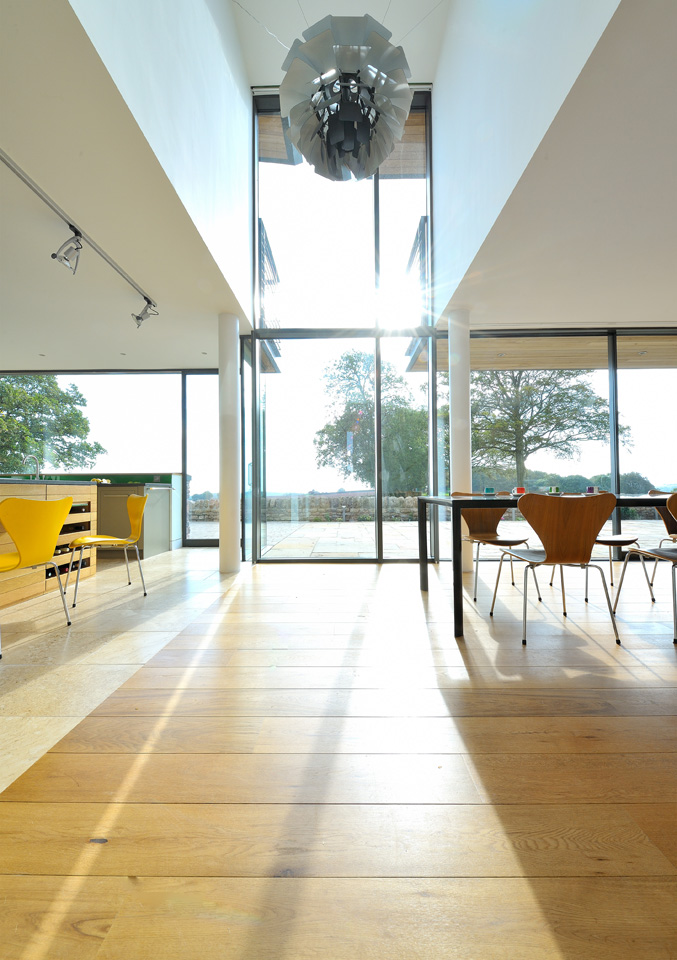 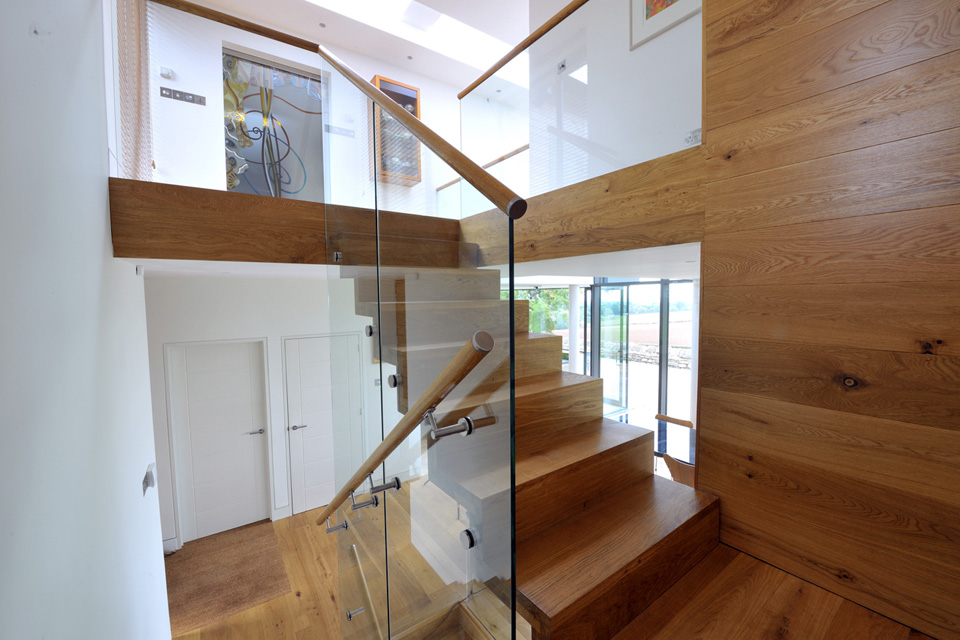 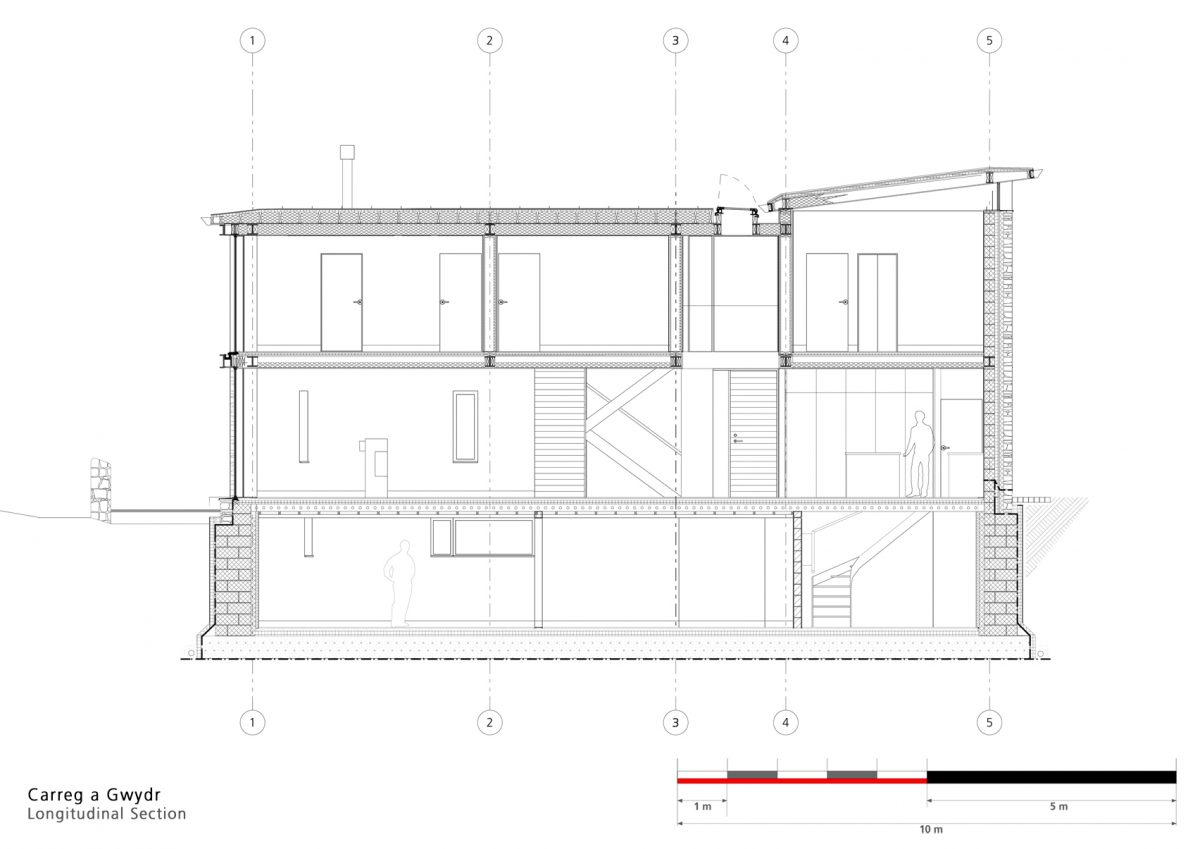 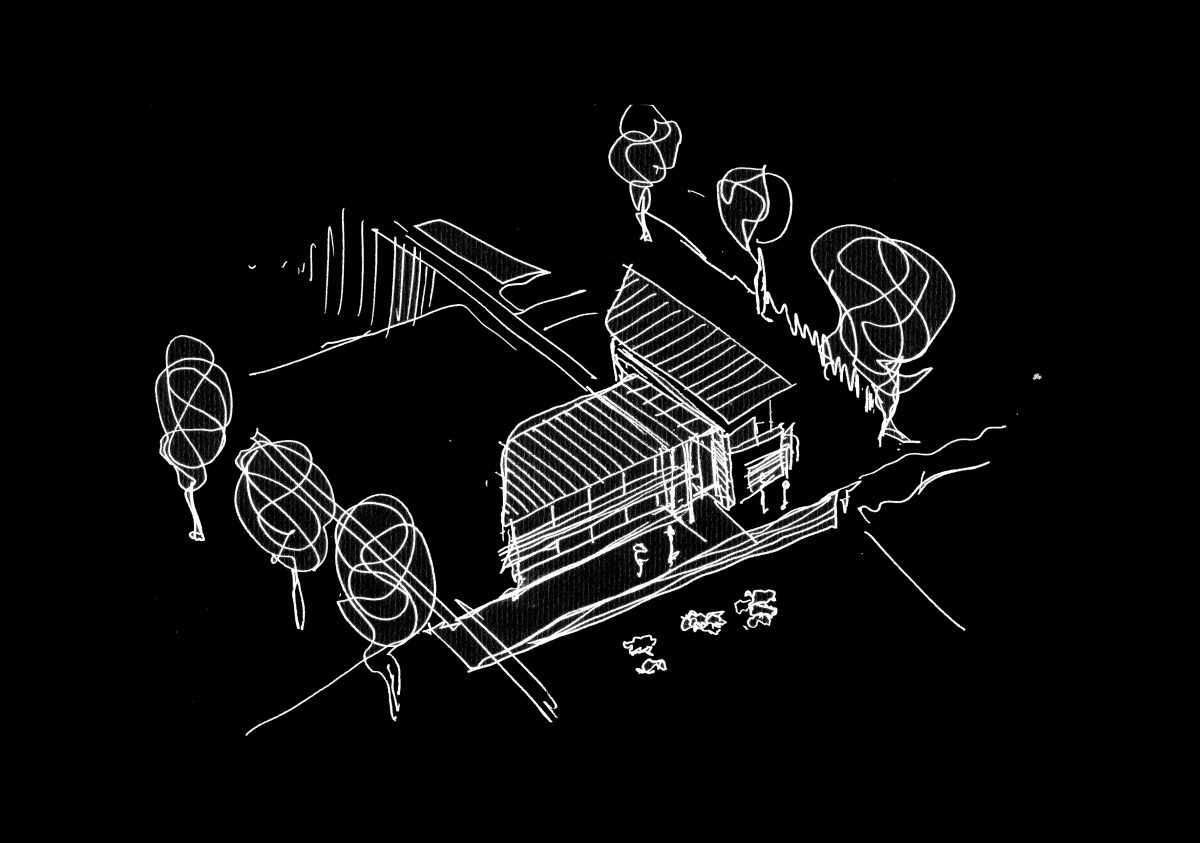 Originally refused planning permission by Monmouthshire County Council in 2008, this replacement dwelling won at an Appeal Hearing in 2009 following Hall + Bednarczyk Architects’ successful demonstration that the building’s design was suitable for its protected landscape setting. The application had been strenuously resisted by planners who were keen to see the enlargement of a farm worker’s dwelling which existed on the site. However, the original cottage had already been much-modified, and what was left of its vernacular form would have been further compromised by extension.

Creating a home with a generous and expansive sense of space raised a potential conflict with the AONB’s tight planning restrictions on building volume. A design emerged which maximized habitable space by employing very low pitched roof forms. The effect of this was to introduce a horizontal emphasis to the design that, when combined with carefully selected materials, served to diminish the building’s prominence when viewed against the natural features of the surrounding landscape.

The site is located at the southern fringe of a rural hamlet comprising mainly 20th Century homes, and the design aims to negotiate the transition into open countryside by contrasting solidity with transparency.  Sandstone walls, which were an existing feature of the site, have been manipulated into curving protective elements that enclose the northern elevation, while the southern elevation is a sliding glass wall intended to create the most transparent connection possible between the house interior and the countryside beyond.

Construction techniques were developed with stone masons which avoided the need to bond the pennant sandstone with visible mortar, enabling highly insulated cavity walls to echo dry stone walling which is characteristic of the region. The upper storey uses steam-curved cedar boarding as a more lightweight ribbon of material, which incorporates cassette cavities for roosting bats. A steel frame set back from the face of the glazed elevations provides a building structure with sufficient stiffness to enable the external envelope to be made up of unusually slender elements. The apparent delicacy of the south elevation is intended to be a counterpoint to the more rugged texture and construction of the stone flanking walls. A blade-like zinc roof and first floor balcony over-sail the building in a dynamic gesture that offers solar protection along the south elevation, while limiting glare and reflection.

The ground floor spaces reach out to the landscape via a flush threshold that leads on to a raised terrace. A stone perimeter wall forms an essential livestock barrier but is kept low enough to the level of the terrace to maintain uninterrupted views.

Above ground, this four bedroom house is relatively modest in size, totalling 213m2 gross internal area over two floors. In order to maximise the beneficial use of above ground space, a substantial basement occupies the entire building footprint, resulting in a total area of 320m2. Enabling works commenced in early 2010, with the contract duration spanning from May 2010 to May 2011. The final contract value using IFC 2005 Rev2 (2009) including external works and a 50m2 garage was £740,000 equating to £2,000 per sq m.

Carreg a Gwydr was conceived from the outset as a low energy dwelling, reflecting the clients’ wish to have a reduced carbon footprint and lower fuel bills. In response to the brief, the design sought to adopt measures which met these efficiency aims, while simultaneously addressing the clients’ wish to build a home which celebrated the exceptional views afforded by its location.

The building is orientated with a south facing main elevation, and all of the primary inhabited rooms and spaces are located along this axis to benefit from passive solar heat gain. The southern elevation is generously glazed beneath a substantial projecting roof and first floor balcony. This design strategy reflects the wish to gain an appropriate degree of solar benefit as well as capturing far-reaching views. The overhangs prevent excessive solar heat gain in the summer, while permitting low angled winter sun to provide beneficial warming to the building in winter months. The north elevation has a limited number of carefully placed openings which serve to limit heat loss while encouraging cross-ventilation. A double height space encourages air movement through the use of natural convection currents, with rooflights operating on temperature and weather sensitive actuators to provide effective natural ventilation.

The design incorporates a number of Low Carbon technologies, which have been selected for their appropriateness to the dwelling and site. A large unshaded lawn benefits from natural solar warming, so 500 linear metres of subterranean coils are linked to a ground source heat pump heating all rooms and domestic hot water. A heat recovery system draws warm air from the top of the double-height space, bathrooms, kitchen and utility room to further boost the operational efficiency of the system. The GSHP water output is optimally matched to hot water underfloor heating. Space heating may be augmented within the main space using the log burning stove.

The building’s annual CO2 emissions have been assessed at a level of 12.4kg/m2. The sustainability strategy results in the building achieving a SAP score of 84, and being rated B on its Environmental Energy Performance Certificate.

“If ever Frank Lloyd Wright’s guidance about successful organic architecture could be relevant to building one-off homes in Britain in the early 21st century, then it’s here, for the fabulous Carreg a Gwydr (Welsh for Stone and Glass) — a masterly self-build in the countryside outside Chepstow that is the pride and joy of its owners, Tim and Ceridwen Coulson, and its architect, Martin Hall of Hall + Bednarczyk.” Home building and Renovating Magazine